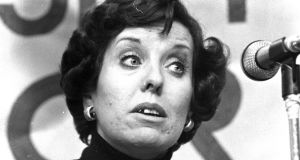 Betty Williams of the Peace People in 1977. Photograph: Peter Thursfield 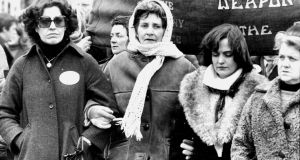 Betty Williams, who has died aged 76 in Belfast, made her last public appearance in her native city earlier this year in the glamorous style she favoured, her blond hair elegantly styled and framed by a fur collar as she brought her friend the actor Sharon Stone to City Hall to sign the book of condolences for Seamus Mallon after his death in January. Stone called Williams “my dear second mother” and had worked with the veteran peace campaigner after Williams set up a foundation for refugee children in southern Italy. Williams paid tribute to Mallon, recalling that he had attended early marches held by the Peace People, the organisation she co-founded in 1976.

Williams was born Elizabeth Smyth in 1943 and grew up in a working-class family in Andersonstown, west Belfast. She married English man Ralph Williams when she was 19. They had a son and a daughter. She worked as a waitress and a receptionist and was also a proud housewife. On August 10th, 1976, the fifth anniversary of the introduction of internment, there had been trouble on the streets. Williams was returning from a visit to her mother when she witnessed a speeding car smashing into a young woman, Anne Maguire, her baby in a pram and her other three children walking along the footpath. Baby Andrew and his eight-year-old sister, Joanne, were killed instantly. Their two-year-old brother, John, would die of his injuries the next day. Seven-year-old Mark survived. Their mother, Anne, was badly injured. She would survive, haunted, for less than four years before taking her own life. The car was being driven by a dead IRA man, Danny Lennon, who had been shot dead at the wheel by British soldiers after a high-speed chase through the residential area.

Williams was horrified and incensed. She would correct anyone who said she was driven by anger. “It was fury,” she said. She was one of the women who spearheaded the production of a petition that simply called on the gunmen to stop, and she was one of the first to go out and about the streets of the area, gathering 6,000 signatures. Williams also advertised her phone number and urged people who supported the movement to contact her.

“It was a brave thing to do at that time in an area where the IRA had a lot of support,” said Anne McCann, who was taken on for six weeks to deal with the letters and donations flooding in from all over the world, and ended up working for the organisation for 18 years.

“She got a lot of hostility, brutal hostility, from republicans. The first big peace march in west Belfast got stoned by young people sent out to attack it.” Williams soon joined up with Anne Maguire’s sister, Mairéad, and with journalist and civil rights activist Ciaran McKeown, to found the Peace People. Williams was flamboyant, Maguire more intense. Both were passionate. Between them, and with strategic guidance from McKeown, they generated considerable support, including among hard-pressed working class-women in republican heartlands who were weary after eight years of being caught up in violence.

Tens of thousands of people, mostly women, attended peace rallies all over the North in the months that followed. There was an undertone of sexism to some of the language used by opponents, who tried to dismiss the movement as wishy-washy and apolitical. (Though the founders and figureheads were women, the Peace People’s committee was largely male.)

“Betty was a larger-than-life character,” said McCann. “She never let the truth stand in the way of a good story. But she believed in peace and she stood her ground.” Williams could be blunt and was no diplomat, once describing US critics as “third-generation leprechauns”.

When Williams and Maguire won the Nobel Peace Prize in 1976, it momentarily seemed like a high point for the Peace People. However, publicly aired disputes about how the prize money would be spent soon discredited the movement. It was Williams who broke first with the original declared intention of investing it in the Peace People. She declared that she would spend it on her own peace projects. There was also a growing and unfulfilled demand that the founders replace the simple rejection of violence and killing as, in Williams’s words, “a mother’s labour spurned”, with a more sophisticated political analysis of peace-building. In 1980, shortly after the suicide of Anne Maguire, Williams left and moved to the US.

Her marriage had broken up and her wider family was fractured. She was in debt. “Betty did, to a degree, lose the run of herself,” said one Belfast human rights campaigner. “She drank too much – like many Northern people at that time – and she was too much in love with the limelight.” He added, however, that Williams and her colleagues had inspired a generation of activists who went on to found nongovernmental organisations that are still doing important human rights work in the North today. The death toll from the conflict fell after 1976 and the Peace People undoubtedly played a part in turning the tide.

In the US, Williams became a well-known speaker on global peace platforms, alongside figures such as the Dalai Lama, Mother Theresa, Archbishop Desmond Tutu, Yasser Arafat and Aung San Suu Kyi. She got married again, to an American businessman. She returned to Ireland in 2004, and in 2006 reunited with Mairéad Maguire along with other Nobel laureates to found the Nobel Women’s Initiative to promote women’s rights and peace-building.

On hearing of her death, Maguire said she was “a woman of great courage with a passion for peace and love and compassion for all children”. President Michael D Higgins spoke of how “working for peace became her whole life”. Archbishop Eamon Martin quoted the Peace People pledge of 1976: “We dedicate ourselves to working with our neighbours near and far, day in, day out, to build that peaceful society in which the tragedies we have known are a bad memory and a continuing warning.”