Are We There Yet: Viral gymnastics video is one of the most joyful examples of sporting activity 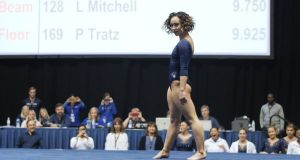 Katelyn Ohashi: her video has been viewed online more than 60 million times in four days

In episode 78 of the long-running drama series I like to call Living Out My Unrealised Dreams Through My Children, I signed my daughters up for a gymnastic class.

Netflix seems to feature a lot of gymnastics-based dramas aimed at girls and many, like Raising the Bar and A Second Chance, are set in Australia. My kids are fluent in the language of gymnastics – the chatter is all about layouts and back handsprings – even if their own achievements are limited to handstands against the kitchen presses.

One of my big dreams as a child was to be the circus girl standing in a sparkly leotard pointing elegantly up to the people swinging on the trapeze. Even then, I liked that she didn’t have to do much by way of actual exercise and yet her role seemed extremely important.

I seem to remember I was able to do decent cartwheels once upon a time. But it’s fair to say I will never do a cartwheel again. This would make me sad except I have two people doing cartwheels and roundoffs in my kitchen most hours of the day. There are other, less injury risking, ways to get your kicks.

I signed them up to a gymnastic class – not easy, this activity is hugely popular – and off they went. But I forgot about the gear. One of them grabbed a pair of GAA shorts going out the door and teamed it with a the top half of a swimming wetsuit yoke. It was only when I saw them swinging from bars beside mini Nadia Comaneci’s dressed up to the gymnastic nines that I realised they needed more appropriate gear.

The next day I was off to my local dance attire emporium to buy proper jazzy gymnastic outfits. I had an excellent time choosing, flicking through the rails and imagining myself as a nine year old all kitted out and sparkling in a big top. The velour! The sequins! The flipping prices! I got the works. Leotards, snazzy shorts to go over the leotards and shiny bags to put it all in.

A few days later, a viral video was the source of even more fervour for gymnastics even if previously I’d been trying to curb their extra-curricular activities.

Katelyn Ohashi, a US college gymnast, did a floor routine which was given a perfect 10 and has been viewed online more than 60 million times in four days.

I’ve watched this video 10 times or more. It’s one of the most joyful examples of sporting activity I’ve ever seen. She dances across the floor, she grooves, she slides, she shimmies. She’s happy and she knows it. Yes, of course her extraordinary ability to flip herself in the air many times over and land in the splits and bounce back up is breathtaking but it’s the joy in her pursuit I keep coming back to. Her joy is what has made me even more encouraging of my daughter’s latest passion.

I wanted to find out more about Ohashi (21) who studies at UCLA and discovered that in 2013, still in her early teens, she beat four-time Olympic gold medallist Simone Biles in the American Cup. She retired from elite gymnastics in the years afterwards because of injury and physical and mental burnout.

She spoke about this time in a video interview last August: “No one ever fully knew what I was going through, and I never really could say or publicise what was wrong with me.” She mentioned that relentless pressure around her body shape and her diet from fans and coaches had left her “broken”.

“I was happy to be injured,” she said. “I was told that it was embarrassing how big I’d become. I was compared to a bird that couldn’t fly. These are all things that I heard before I even got injured, things that, when I was skinny I was told. So what would they think of me when I had become big? I couldn’t accept myself. Gymnastics was my worth, it was my life. I hated myself.

“Coming to UCLA, having been blessed to have the coaches I have that don’t encourage us to just be athletes, [but to be] human beings instead, has really helped me to [become] who I am today,” she said. “Also, having my team to support me throughout that, which is a privilege. I felt like I was dancing with them on the floor and having as much fun as possible. That’s all been a huge, huge part of my joy.”

I want my children to be joyful. I want them to do stuff whether it’s music or singing or slime-making for the sheer love of doing it. I want them to have as much fun as Ohashi has when she competes and to love and respect their bodies the way she does. I want them to fly.

Some things to do with children this weekend ....

The First Fortnight festival continues on Saturday with a couple of lovely children’s events at The Ark, which has teamed up for the first time with Ireland’s award-winning mental health arts and culture festival. The King Who Finds Feelings Confusing Meet the king who has banned feelings and colours from his kingdom in this fun and interactive workshop for three to five year-olds. 10.15am

At 2.30pm you can join the circus with Clowns Without Borders and learn some new circus skills and tricks in this fun-filled free workshop.

Both events are on Saturday, January 19th.

Get your skates on and go to Ice Skating Blanchardstown where there’s an 800sqm ice rink under the roof of a 2425sqm marquee on the Millennium Park beside the Blanchardstown Centre.

The Penguin Club is available to children of three to 10 years. The smallest size skate is a 27 and they also have a skate that fits over the shoe and can be adjusted to small sizes. The sessions take place in the smaller rink to encourage the young skater to gain confidence with an accompanying adult and the Blanchardstown “ ice marshals”.