Crying in public is a show of strength. More Irish men should do it

Shedding tears should not be seen as masculine or feminine, but as a show of strength 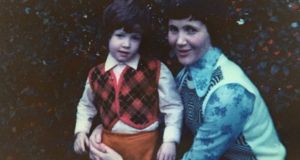 Quentin Fottrell as a little boy with his mum

I never saw my father cry. That behaviour was not unusual among his cohort. But how much has really changed since then?

Picture a woman sitting opposite a man at a candlelit dinner with rivers of tears cascading down her face. Now reverse the genders. Which is more likely to turn your head?

In 2019, men are more open, but studies suggest it’s still more usual for women to express their full range of emotions. I may be an outlier in that I see crying as healthy. In fact, I do it all the time. My mother, to her credit, never told me that boys don’t cry. Also, I was too delicate to participate in the butch bravado of male bonding. Other gay men, who were made of tougher leather, may have gotten in that mix. I didn’t. I was just me.

Whatever the reasons, I have a history of crying. But I am not ashamed of it. I’ve perplexed service staff and bewildered patrons, lowered the tone of fancy establishments, and both worried and amused friends. I’ve publicly shed tears about sickness, death, unfulfilled dreams, and things that can never be unsaid or undone.

Overall, I actually consider myself a very upbeat and happy person. Crying means I’m right there, in the moment. But a middle-aged bloke losing it in public? That’s GUBU territory. So I would like to address the vexatiousness of grown men crying in public – and make a case for why we should do more of it.

I cry almost as much as I laugh. And I laugh a lot. In recent years, I’ve shed tears all over Dublin. From the Fumbally to The Ivy. I once walked all the way from Grogan’s on South William Street to Milano’s in Ballsbridge in floods of tears after saying goodbye to friends before returning to New York, my adopted home of eight years. I’ve cried on planes and trains, and while reading news stories, hunched over my iPhone in a crowded cafe. Newscasters, sportsmen and presidents have let the world see them break down on screen, but outside a rugby match it’s not often you see men in Ireland do the same.

Most of us have had good reasons for crying. We didn’t get that job. The bottom fell out of our finances. We have insecure housing – or none at all. Perhaps we’re under-sleeping and overworked.

Here’s my earliest memory of crying: Duffy’s Circus, aged three, I reached out to pet a tiger cub, but it was whisked away before I could touch it. I wailed like the tent would collapse and consume me. Life, I realised, wasn’t always fair. I have a photograph of that moment, which is probably why I remember it. I did not know then that society found it odd when grown-up boys cry, but I do it anyway. Tears open up a space for talk and maybe resolution.

Sure, it’s easier to cry doing the dishes or in the shower. In 2009, after a relationship ended, I discovered there was nothing like bleach, soapy water and salty tears to get that perfect shine. Tears have a biological purpose: studies show crying stimulates the production of endorphins, and releases excess chemicals and hormones linked to stress. In any case, people sometimes surprise you: when I heard about my grandmother’s death while viewing a house in Stoneybatter in 2006, I held onto the kitchen sink and roared like a banshee. The estate agent respectfully backed away.

Public tears are full of contradictions. Cinemas, funerals, weddings and sports events are among the more socially acceptable public venues for crying. Public tears are also more common over Christmas and New Year. Cameramen at Dublin Airport are like birdwatchers waiting for the first swallow of spring during this period. They know that tears can say more than a 1,000 words.

And there are times when the tears are not about you. If a friend tells you they have a serious illness, that’s a moment for their tears, not yours. If you visit them in hospital, summon Gelos, the Greek god of laughter, and cry tears of joy instead. Save your fear for the waitingroom or the taxi ride home.

During a pre-Christmas visit to Ireland to visit a sick relative, I met an ex at the bar of The Ivy in Dublin. While the post-Celtic Tiger crowd was enjoying cocktail hour all polished up like new pennies, I was that one dirty shilling: a middle-aged bloke, loitering with malcontent, losing his composure at the bar. I reached disdainfully for a tiny, square-shaped black paper napkin. Try dabbing your bitter tears with that! I did anyway. I asked my ex about the incident days later. He cited old-fashioned nostalgia. “Throw in middle-aged angst and Christmas blues,” he said, “and those tears were preordained.”

The Ivy got off lightly. Upstairs at Voici Crêperie in Rathmines, sitting at a small table with old friends a few days later, I was suddenly overwhelmed. Time vanished and it was 2011 again. I just wanted to pay the bill and go home, but someone else was living there now, decorating their own Christmas tree, and, I hope, creating their own happy memories. “Home” for me was now 3,000 miles away. I grabbed a handful of napkins – this was no time to save the planet – and sobbed. I was happy. I was sad. I was grateful. I was loved. I was regretful. I was tired. I was grieving. I didn’t know what I was. But I couldn’t stop.

And then the most soft-spoken and, perhaps, reserved man in our group stood up and walked around the table. He is married to the girl I brought to my Debs, and sometime after their marriage he became my friend too. This fellow – all 6ft something of him – put both his arms around me. He said: “Let him cry.” So I kept going.

That memory shall remain in some enchanted place where traditional masculinity and social norms no longer exist. Our waitress hovered at a safe distance with our food. “Don’t worry,” I told her, mid-snort. “I do this all the time.” We laughed. We cried. We laughed. We were that teenage tribe once more.

My message to those who are vulnerable: crying isn’t masculine or feminine, and shedding tears is not a sign of weakness – it’s a show of fearlessness and strength. Life is short, so I laugh like there’s a circus in my tummy and everyone’s invited, and I cry like I’m back at Duffy’s. There’s something desperately wrong in our society when eight out of 10 suicides are men.

The first boy I ever kissed, behind the UCD Library, left this world by his own volition. I wish he had stuck around. I wish. I wish. I wish. Three male friends in recent years – as life got harder and they grew older – felt they were in too much psychological turmoil to stay.

If you shed too many tears or none at all, talk. Whether you’re a man or a woman or gender nonconforming, go for it. Tell on yourself. I don’t know where Debrett’s book of etiquette on public displays of emotion ends, and mental-health issues begin. I’m just another guy who worked all his life to get to the middle. But no one should feel like they have to hide how they feel. That can cheat us into believing that our darkest thoughts and all-too-real problems are fatally unsolvable. It can trick us into believing we are alone. Not everyone wants to cry, but if you do, don’t hold back. Crying can be more useful than silence or anger.

Today, I view that childhood tiger photo as a powerful message to reach out to others. Last April, I fell in the sacristy of my Universalist Church. The service had ended an hour earlier. I lay on the cold floor alone with a fractured ankle, looking up at the stained-glass window, wondering: “What do I do now?” I was in terrible pain. As if by magic, three women, like fairy godmothers, appeared. They helped me into a chair and stayed with me. Their kindness moved me to tears.

Please think about that man and woman in that theoretical restaurant, and imagine them both crying. We need to start treating emotion and gender equally.

Two referendums later, there should be no stigma, no shame. So walk openly on your own tear-stained boulevard of dreams – and see where in your life it takes you.