Why do Meghan and Kate hate each other? Duh! It’s Brexit, dummy

Jennifer O'Connell: Kate is seen taking her earrings off, while Meghan hisses and Eugenie cheers from the sidelines 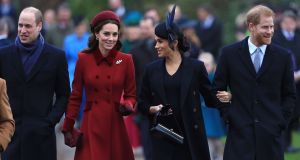 If you’ve been keeping up with your news of the British royals recently – as opposed to doing something useful while you wait for January to pass, like staring out at the rain and eating your body weight in chocolate Kimberleys – you’ll be aware that those catfighting harridans, Meghan Markle and Kate Middleton, have managed to temporarily “quash feud rumours” by “putting on a united front” over Christmas.

This was after the Queen “reached her limit” with the pair of them, reported US Weekly, after they have been squabbling for months over . . . who knows? They’re women. And according to certain sections of the media, that’s just what women do. Put us in a room together, lock the door, and we’ll soon be at it like Conor McGregor and, er, any passing bus. It could have been anything: Meghan stole Kate’s hair tongs as well as her thunder; Kate refused to binge-watch Suits on Netflix over at Meghan and Harry’s again.

Anyway, in the latest instalment of the entirely factual, independently sourced and verified, and not remotely made-up-for-clicks feud, it is reported they put their differences aside and had a “chuckle” over a game of Scrabble. An “insider”, identifiable by virtue of his cultural reference points as Prince Philip, confided: “If German and British troops could put their differences to one side to play football during the first World War, the feeling was Kate and Meghan could follow suit for Scrabble.”

Fear not: there’s evidence of a further possible flashpoint over Kate’s tolerance of William hunting. When I say “evidence”, obviously I mean anonymous “insider” titbits, possibly dreamed up on some hack’s tea break.

I’m not suggesting this isn’t all an entirely factual, blow-by-blow account of what happened in Sandringham or whichever of their 71 beautiful homes they occupied over Christmas.

I haven’t a clue, and neither, I strongly suspect, do the people who have actually been assigned to the royal riftwatch beat. I have visions of secret bunkers in London, where teams of miniature Piers Morgans are holed up right now, and have been since the first photos of Harry and Meghan surfaced, storyboarding their royal coverage for the next three to five years.

They decide that in February, there’s front page news that a possibly tearful Meghan “may be” feeling unsupported by Kate in her pregnancy. In March, there’s a brief rally, with Kate starring as a doting godmother to the new royal prince. By June, photos of Meghan squinting at Wimbledon will be proffered as evidence she is once again pissed off, this time that the Queen is too busy babysitting Kate’s three to show any interest in little Jupiter Kingdom Coppers.

(His evocative third name came about after his parents slipped away for some “private time” during their trip here last May, and the rest is history. But his parents just call him King for short.)

Come August, there’s a full-on resumption of hostilities after Prince George accidentally spills his beaker of Kombucha on Meghan at a barbecue. Then Harry is photographed frowning, and this is when the public mood really turns on Meghan. By November there are reports Kate is seen taking her earrings off ready for a fight, while Meghan hisses at her, and Eugenie cheers from the sidelines.

The feuding women trope is as old as literature itself. From Cordelia vs Goneril and Regan in Shakespeare’s King Lear, to that classic of another genre entirely, Strumpet 3 – A Transatlantic Feast of Tastiness!, nothing gets the blood coursing through the veins of the miniature Piers Morgans of this world, like the vision of a pair of posh shrews at it hammer and tongs.

Britain’s love affair with Meghan was never going to last

As a biracial, feminist, American, thirtysomething divorcee, Meghan Markle is perfect for the part she has been cast in as Chief Distraction from the Mess They’re In. She enjoyed a brief honeymoon period in the warm glow of public approval because she so obviously made “poor wee Harry” happy, as the elderly ladies clad head to foot in union jacks gushed when I was in London during the wedding. But Britain’s love affair with her was never going to last.

There has been an opening for the past 21 years for a new Diana, a role that Kate Middleton was too wholesome and well-grounded to fill. But Markle, with her Hollywood glamour, her independent spirit, and her hint of damage, is perfect.

So if she is wondering how she went from being embraced as a symbol of hope and a brighter, more progressive future to an upmarket Kat Moon with the speed at which you can say Brexit distraction, that’s how. It doesn’t matter what she does now, this juggernaut will roll on and on. She’s gone from being a lead actor in a long-running soap, to being a lead actor in a long-running soap in which nobody has bothered to give her the lines, and doesn’t even care if she shows up for filming. She might as well put her feet up and enjoy the drama with the rest of us.

It’s all very distracting and, of course, that’s what Britain needs right now. Why do Meghan and Kate hate each other? Duh. It’s Brexit, dummy.