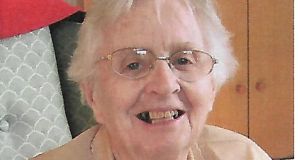 Sr Hilda Heffernan: Liveliness, laughter and love characterised her remarkable life, including 79 years as a Notre Dame sister, 43 of which were spent in South Africa.

It took death, three months short of her 100th birthday, to quench the infectious exuberance of Sr Hilda Heffernan. Liveliness, laughter and love characterised her remarkable life, including 79 years as a Notre Dame sister, 43 of which were spent in South Africa.

Born in 1919, she had an idyllic childhood in Prospect House, a country home outside Kilkenny. Her father, Dr Patrick Heffernan, was the medical officer for Kilkenny, and she and her five siblings rode their own ponies, and gave concerts each year in the local hospital. Her love of horse training was just one of the sacrifices which Hilda’s strong religious faith demanded, but she never lost that interest and loved the Cheltenham races.

Art was one of Hilda’s many talents, and in her later years she painted the dairy she had loved in that Kilkenny home. Her vivid memories of the dairy, the potato house, and the chopping house kept alive a long-gone era of country living.

In 1939, at the age of 20, Hilda entered a Notre Dame Convent in Sussex, England. After training in Our Lady’s College, Liverpool, as a primary school teacher she taught in the Notre Dame School in Worth, but in 1951 her high intellect and boundless energy were channelled into her role as postulant and novice mistress for the Notre Dame congregation in South Africa. While there she was deeply distressed by the injustice of apartheid and the incarceration of Nelson Mandela. Those who knew her in Africa remembered her as an inspirational teacher who was innovative in her use of drama and artistic expression.

Back in England, at the age of 75, Hilda devoted her life to caring for sick and elderly sisters, with special affection for those from Ireland. However she never ever saw herself as one of the elderly!

To compensate for the loss of driving in her nineties, Hilda acquired a laptop and embraced this new technology, dashing off emails instead of handwritten letters. This was a loss for the many who missed how the speed of her mind was reflected in the dense thicket of her exquisite handwritten notes, often accompanied by her own hand-painted cards.

The extent and breadth of her interest and knowledge was phenomenal. She read widely, from thrillers to dense theological treatises. Her 99 years spanned the reign of nine popes, some of whom troubled her deeply spiritual but progressive soul. “I’ll just have to trust in the Holy Spirit” was her pragmatic approach.

The election of Pope Francis competed with the release of Nelson Mandela as one of her happiest days.

“At last, a pope for the poor!” she rejoiced, and launched into avidly reading all of his writings and encyclicals.

Hilda derived great pleasure from visits of her much-loved family, and the birth of each new baby.

Her joyful “Wonderful! Wonderful!” continues to echo in the ears of all those who loved her. Indeed she was a wonderful woman.