I look at 2019 as though looking at a stranger. Who knows where it will end? 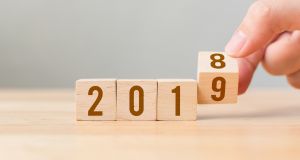 Facing into 2019 I muse about having a different kind of existence too, now that my children are older Photograph: istock

So how’s it going on the auld new year’s resolution front? Almost two weeks into 2019 already, the bottle banks have been filled to bursting, the turkey carcasses have decomposed and most of the tearful emigres have returned to unimagined lives – and here we are still, eh?

Here we are, picking out stray pine needles from the rug and crawling under the couch to gather up the last shards of the non-biodegradable plastic tat that bled from the Christmas crackers only weeks ago, those paper clips and clip-on moustaches, those miniature dice and measuring spoons, mementoes from our family feasts that are destined, we might fear, soon to be filling the gullets of Arctic wading birds. And meanwhile, we run up and down the seafront to jog off the brandy butter, the angry grey ocean snapping at our heels.

Here we are, stepping pluckily into the new year, willing to face down the dark nights and put our best foot forward into a brighter, more sustainable future, armed only with a few shaky resolutions under our puny oxters. (“Speak for yourself!” I hear you cry. “My oxters are things of beauty! Why, I’ve been to the gym at least once since I signed on the direct-debit dotted line.”)

We all know that most new year’s resolutions fail before the ink of good intentions is dry on the page, and yet year on year we persist.

Me, I’m full of good ideas for 2019. I’m going to sleep more and drink less. I’m going to consume less meat and ditch the diesel. And I’m going to get really shirty with bar staff who stick little dolphin-eviscerating plastic straws in the gins I won’t be drinking. Mainly, though, I’m going to try to limit the time I spend worrying about the same old claptrap, because as much as we plan for and angst about and try to manage the future, it is, of course, entirely unknowable.

Decades ago, my father-in-law bought a tiny, dilapidated house in a high village in the mountains of southern Spain. The modest little dwelling overlooked a dry river; outside the faded wooden door, goats ran up and down the narrow village streets for milking, their clattering bells punctuating the long lemon-scented Andalusian days.

He set about renovating the house with the help of friends he made there. He hung windows that opened on to the view, and built a studio, his easel facing out on to the corkscrew hill beyond the river and the low, simple church at its peak.  Downstairs, leading out from the old terracotta-tiled kitchen, he built a terrace that he planted with vines, a place where he could sit in the evening and wait for the utterly immersive, velvet dark to fall.

His plan, after an interesting, occasionally capricious, life, was finally to do what he had wanted to do for a long long time. He was going to live in the little house and paint, his art training having been interrupted by the war. I don’t need to spell it out for you: he died suddenly, entirely unexpectedly, just before that idealised and lovingly planned life could begin.

I muse about having a different kind of existence too, now that my children are older and my responsibilities reduced by my mother’s death. I imagine retreating to a high village halfway up a goat-strewn mountain, living a simpler, more measured life. And then I think about city lights and friends and work and all those gins I won’t be drinking.

Caught as I am on a moral seesaw between pedalling the byways, a haul of foraged mushrooms in my bicycle basket, and slumping over a cocktail bar wearing a pair of kitten heels fashioned from real kittens, I find myself looking into this new year as if into the face of a stranger. Who knows where this one might end?