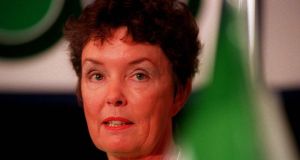 In the 1990s, the Limerick-based mother of four founded the organisation, Mothers Working at Home as a support network for housewives who felt isolated and ignored by politicians and the media.

Nora Bennis, the prominent anti-abortion and anti-divorce camapaigner died in University Hospital Limerick following a short illness.
In the 1990s, the Limerick-based mother of four founded the organisation, Mothers Working at Home, as a support network for housewives who felt isolated and ignored by politicians and the media.

Abortion and divorce were her main campaigning issues but she also believed that women had a right to be full-time mothers in the home (and to be paid for it), rather than be forced out to work for financial reasons. She was against the removal of tax-free allowances for each individual child in the 1980s and understood how tax individualisation would discriminate against women based in the home. She also championed the importance of rural post offices and farming families. She campaigned against the Department of Education’s Stay Safe sex education programme, claiming it undermined parental authority and campaigned for a no vote in the same sex marriage referendum in 2015.

In 1994, Bennis became leader of the Solidarity Movement, a group of independent political candidates aligned with the conservative Catholic lay organisation, Family Solidarity. She stood as an independent in the European Parliament elections that year, obtaining 5 per cent of the first preferences.
The Solidarity Movement was involved in the campaign against divorce ahead of the 1995 referendum. Following that referendum, Bennis founded the National Party (later renamed the Christian Democrats) which was vehemently anti-abortion. She ran unsuccessfully in Limerick in general elections in 1997, and 2002 and in the 1998 byelection. She was also a candidate in the Limerick City constituency at the 2016 general election but was eliminated on the first count.
Ahead of the 2002 abortion referendum, Bennis became involved with a new alliance of anti-abortion campaigners calling for a no vote in the referendum of that year, which asked whether a mother’s suicide ideation was grounds for an abortion. In 2009, she was among a number of unsuccessful challengers to the result of Ireland’s second referendum on the EU’s Lisbon Treaty.

Bennis was later spokesperson for the Catholic Democrats (previously Christian Democrats) and secretary to Mothers Alliance Ireland, both of which opposed the 2012 amendment to the constitution on children’s rights. She claimed the amendment would put children “in grave danger of being legally snatched by the State”.

Despite her unsuccessful attempts to become a TD in four Dáil elections and one European election, Bennis was respected among her political colleagues and was known to be a formidable opponent in television and radio debates.

Undaunted by changing societal norms, she said Taoiseach Bertie Ahern’s first public appearance with his then-partner Celia Larkin, was looking for “cheap publicity”. Ahern, she said, had a responsibility to “reflect the ethos of the nation”. People, she stressed, should clearly stand by the bond of Christian marriage.

Born to Paul and Margaret Shinners, Nora Shinners was the middle child of five.  Nora attended the Presentation primary and secondary schools in Limerick city, leaving at Intermediate Certificate to train to become a secretary. She worked for Limerick City Council before leaving her job to marry Gerry Bennis in 1963.

The couple set up home in Limerick where they raised their four children:  Gráinne, Muirne, Aedin and Rory. She was a huge supporter of the GAA where her husband, Gerry, was previously chairman of the Limerick city and county boards. Irish dancing was a childhood talent which Nora continued into adulthood. She set up and taught at the Bennis School of Irish dancing which her daughter, Muirne, runs to this day.

A devout Catholic and daily mass-goer, Bennis led a 24-hour fast and a day of prayer in protest at a sex shop operating in the Limerick in 1995. “She was labelled, and sometimes ridiculed, but that wouldn’t stop her. Whether people agreed or disagreed with her, all accepted she was a woman of conviction,” her daughter Muirne said.

Throughout her life, she remained very close to her adult children and played an active role in the lives of her grandchildren. “ Mum knew the value of mothering, not just for us, but for every child, and that is why she fought for the recognition of the value of the mother, the value of the family, the value of life,” said Muirne.

Theresa Heaney, a member of the – now disbanded – Catholic Democrats and long-time friend of Nora Bennis, said that she was a “woman of the highest integrity who was deeply committed to her Catholic faith”. Heaney said “many people are aware of policies and childcare issues as a result of Nora Bennis speaking out. Her views didn’t fit in with the radical feminist ideology which sees motherhood as an obstacle to the progress of women.”

Always keen to share her values, she corresponded for 20 years with Jack Potts, a prisoner on death row in Georgia, USA, who had pleaded guilty to murder. Potts first wrote Bennis a letter from jail. He was impressed by her support for mothers in the home, as he felt his problems started because his mother was absent from the family home when he was a child. Through their letter writing, Potts became an Irish-speaking, GAA-loving Catholic, before he died of cancer. Nora’s daughter, Gráinne, visited Potts twice in prison– once bringing a  Limerick GAA jersey with her.

Nora Bennis is survived by her daughters, Gráinne, Muirne, and Aedin, her son Rory, her brother, Ollie, sister Gemma and six grandchildren. Her husband, Gerry predeceased her.