Maria Boyle on her new book, Instagram fame and being honest about motherhood 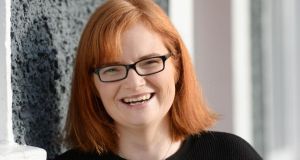 For most mothers, pregnancy and motherhood are heady brews of excitement and anticipation and, often, loneliness. And, as illustrator/cartoonist/scientist Maria Boyle asserts, maybe even a tiny bit of boredom.

“I didn’t know what to expect going into pregnancy I don’t think anyone does,” she admits. “Even that book, What To Expect When You’re Expecting, doesn’t really go into the ins and outs. I was creating something inside me, but I still found it hard to be properly creative. I tried to draw at one point, and just ended up writing ‘pregnancy is boring’ in really big letters. I couldn’t escape it, but I also didn’t want to talk about it.

“It is really isolating though,” she adds. “I realised pretty early on – when I was looking for a chair in Ikea, in fact – that a lot of pregnant people ignore other pregnant people. Maybe it’s to do with being pregnant and wanting to feel a bit special.”

For the last six years Boyle has created a series of well-received cartoons under the moniker Twisteddoodles. Several of them routinely go viral online (both Dermot Bannon and Dwayne Johnson picked up on her cartoons of them with no shortage of wry amusement).

And there’s certainly something in her astute observations and humour that were always going to make Boyle’s personal account of pregnancy and motherhood entertaining. Sure enough her book, Newborn Identity, is part comic, part how-to guide and part memoir, with no end of warmth and charm.

Boyle’s background in comedy – she had previously dabbled in stand-up for three years – had a hand in its making.

“I wasn’t massively successful at it , in terms of people knowing who I am, but I did learn that a lot of comedy comes from people either relating to something you’ve said, or you showing them something they’ve seen, but in a different way,” explains Boyle. “I don’t know if it comes from working in science, but comedy is my most-used muscle in a defensive and connecting way. If something happens to me, I have to make something funny out of it, to get back a little bit of control.”

The Newborn Identity is a departure of sorts from the typical motherhood memoir, as it starts with a frank admission: Boyle wasn’t even sure she wanted to be a parent and, after an experience of teenage cancer, wasn’t even sure she was physically able to, or should, conceive. And, like many of her 30-something peers, she didn’t feel entirely ready to start a family, for a number of other reasons.

If pregnancy were a movie it would be very dull, peppered with a lot of action scenes where someone is trying to find a toilet or a seat on the bus

“Yeah, you get to a point when you realise that by your age, your parents have already had their children,” she says. “I thought there would be a point where we’d have our lives all sorted, but that point never happens. All that happens is that time moves on. So we [she and her husband, Colm] were like, ‘let’s give it a go and we’ll see what happens.’” Her twin daughters, Bronagh and Roisin, are now three-and-a-half years old.

“I’d love to say I was delighted [when she found out she was pregnant], I was certainly happy, but terrified. It’s this sudden commitment to your life changing direction entirely.”

It’s a startlingly refreshing jumping-off point for a personal account, and from there on out, Boyle’s candid, arid-dry home truths come at the reader at full pelt.

“I rang in the new year by eating crackers and drinking rehydration solution, just like in the movies,” reads her January 1st diary entry. “My god, if pregnancy were a movie it would be very dull, peppered with a lot of action scenes where someone is trying to find a toilet or a seat on the bus.” And on March 15th: “Pregnancy sickness has been replaced by an ungodly hunger. Now I’m convinced that I’m having twins so that if I eat one I’ve a spare.”

Comparing newborns with being at music festivals, Boyle notes that in both instances, “you get a wristband, you don’t get much sleep, you’re dying for a shower, it’s messier than you imagined[and] you can get your boobs out and no one bats an eye-lid.”

No stone is left unturned at any point in Boyle’s pregnancy and parenthood journey, from the dastardly “parenting police” to a brilliantly relatable take on bodily changes. For all its companionable joviality, the book is a delicate balance of lightness, ticklish candidacy and forthright honesty; something that’s sure to appeal to a readership of parents and nonparents alike.

“I hope [nonparents] buy it – we need to run the wires through the wall in our house,” Boyle deadpans. “I think it would be nice if it spoke to parents about the hardships of each stage that they might have forgotten, but it’s a lovely compliment when people who aren’t expecting say, ‘this gives me a bit of an understanding of the whole thing.’

“I certainly wasn’t going out of my way to create a counternarrative to the whole ‘hashtag blessed’ thing,” she adds. “I was very much aware that people like that existed. I remember before I had kids something saying to me, ‘you’ll get on best with people who have the same attitude to parenting as you do’, and that was very true for me. I got on best with people who were willing to admit that this wasn’t amazing, but you could still enjoy the experience at the same time. Everyone’s just making it up as we go along, and the biggest thing we’re trying to do half the time is convince our kids that we know what we’re doing.”

More than anything, Boyle wanted to make sense of the whole parenthood quagmire for herself.

“After I gave birth, I was spending a lot of time just me and the babies and I didn’t really have anyone to talk to,” she recalls. “I thought, ‘I need to write all this down.’ I was writing to explains what was happening to myself as much as anyone else, but there was a sense of trying to give an ‘in’ to what I was experiencing. Another part of me was worried I would forget it; after all, we’re biologically engineered to forget how terrible it is.”

Having twins brought its own unique set of challenges and observations, and Boyle soon realised that her carefree, humorous pot shots were landing square on target. “I did one illustration in particular about what to say when people ask, ‘are they twins?’ (sample responses: ‘one is a stunt double’, or ‘one is a really clever forgery’), and for some reason it got a really big reaction in terms of [online] pregnancy groups.”

The book also sees Boyle write frankly about her experiences of postnatal depression and medication, and wrestling between feelings of maternal elation and despair.

“It really helped to write about it,” she admits. “I had a feeling around what was happening, but then it became more and more real. My emotions soon shifted from crying all the time to feeling nothing, and it really scared me. I don’t think the experience makes me exceptional, but a lot of it seemed to be relatable. I put the writing about depression out online a year after it happened, and I waited for the judgement, and one of the things that happened instead was people contacting me to say, ‘you know what? You’ve made me realise I’m also depressed.’”

Throughout her pregnancy and in the first few months of motherhood, many others imparted advice to Boyle: some was wise, much of it not. Many others had plenty of opinions to offer on breastfeeding and birthing options: Boyle’s birth plan, such as it was, was ‘get these babies out of me safely’.

All that said, what does she wish she had known at the outset of her parenting journey?

“I wish I’d bought more bottles,” she says decisively. “We were constantly washing bottles for a year. Ah, we had a terrible system going and not once did we think, ‘it might be easier to just buy some more bottles’. Also, invest in a good hand cream – for some reason your hands get really dry. Must be to do with the bottle washing.

“Ultimately, having kids is amazing and I honestly couldn’t imagine my life without them in it,” she surmises. “I’ve had the moments of greatest contentment in my life, but they are moments that have scared me. Fine, a lot of that is the amount of hormones that your body produces, but it’s also about getting to watch someone grow up and go through everything you went through. It’s watching someone else’s body come alive and having access to that. You can’t watch a stranger as intently – I watch my kids sleep sometimes for ages, but I’d say some people would be a bit weirded out by that.”

The Newborn Identity by Maria Boyle is out now via Penguin Ireland. For more information on Twisteddoodles see twisteddoodles.com