Stephens was appointed editor of the County Down Spectator in 1955, when she was 29 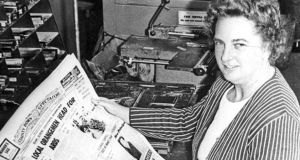 Annie Stephens had no fear of treading on toes

Annie Stephens, known in her home town of Bangor as Annie Roycroft, who has died in her adopted home of Cork city, was 29 when appointed editor of the County Down Spectator in 1955. It was a time when female journalists, let alone editors, were few. She had begun in the Spectator as an office junior at 15, then moved to being a reporter. After the Spectator, she became press officer for the Diocese of Cork, Cloyne and Ross, and editor of the diocesan magazine.

Annie Roslyn Roycroft was born in Bangor, Co Down, in May 1926, the fifth child in a family of six to Tom Roycroft, a retired member of the Royal Irish Constabulary and a Cork man, and his wife, Annie (née Stephens), a Kerry woman. She was educated at Bangor Central Public Elementary School and Bangor Technical College.

In 1941 she joined the Bangor-based Spectator. The paper took its tone from its founder and owner, DE Alexander, who refused to be an elder in the Presbyterian Church because he objected to the Westminster Confession of Faith, the post-reformation doctrine of the Church of England, which is influential amongst Presbyterian churches . Among other tenets its holds that the pope is the Antichrist.

As an office junior she showed the news sense that would lead her into journalism. She became suspicious of a notice submitted announcing the birth of a pair of twins in Millisle, Co Down, because their gender was not mentioned. She contacted the registrar, who had no record of the birth and then contacted a Millisle woman she knew, to be informed the “parents” were a recently married couple in their 60s. The notice was not carried, earning management’s gratitude.

She honed her skills by typing up reports dictated to her by busy reporters, and when necessary she would knock these into shape.

She also took to submitting small local news items, and in 1952 she became a reporter, in a move that caused some nervousness. Fears were expressed about a woman covering a meeting and going home alone in the dark, or going into the office at night, typing up a report and sending it to the Belfast papers on a late train.

She took a short break from journalism, as a clerk with North Down Rural Council. Then she was surprised when head-hunted to return to the Spectator as editor.

Because she was a young-looking 29-year-old, some visitors believed she was the receptionist or secretary. Management fought a losing battle to have her called Miss Roycroft rather than her choice of Annie.

She was initially a member of the small and mild Institute of Journalists. She transferred to the National Union of Journalists because it had worked out a pay structure for the industry. As an editor she was committed to training journalists, which made the Spectator a respected stepping stone for the ambitious.

She introduced an opinion column, which meant treading a difficult line in the Troubles. She was accused of being a republican, of giving loyalists a poor show and of giving loyalists too much coverage. Her editorial line led to threatening phone calls, but she refused to be intimidated.

Personally she was very well known in the Bangor area. In reporting, though, she had no fear of treading on toes. She published the facts.

When future novelist Colin Bateman was a Spectator reporter, he wrote a story about the Sex Pistols album Never Mind the Bollocks being banned by Bangor record shops. He used asterisks, assuming the Sunday-school teaching Roycroft would find the language too strong. She asked him what the missing word was. An embarrassed Bateman said it was “bollocks”. “Well, if it’s called bollocks, bollocks it is,” she told him.

She combined journalism with being an active laywoman in the Church of Ireland. From 16 she was a Sunday school teacher, albeit with a touch of irreverence. She once told a rector she taught Sunday school to satisfy frustrated maternal instincts rather than to motivate the children towards a love of Jesus.

In her mid-50s she surprised many by retiring as editor, marrying and moving to Cork. There she threw herself into the life of the church.

She is survived by her brother Tom and family circle. She was predeceased by her husband, Joe.