Monica Lewinsky: ‘I’m not alone any more. For that I am grateful’

The #MeToo movement has drawn Lewinsky back into public view. She’s in Dublin next week 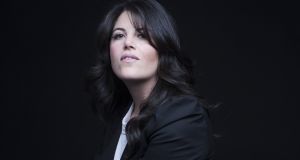 Amid the intense swirl of commentary that characterises social media, sometimes the most simple words make an impact. In October 2017 the official Twitter account of the Women’s March movement published a tweet:

“To all the women sharing stories of sexual assault and sexual harassment, thank you for your bravery to speak up. You are not alone. #MeToo.”

One reply stood out. “#MeToo” tweeted Monica Lewinsky. Its brevity said everything.

Lewinsky, now 45, rose to infamy in 1998 when details of her sexual relationship with then US president Bill Clinton emerged. The affair almost brought down the president, led to only the second impeachment trial of a US president in history and dominated news cycles in the United States and around the world for months.

Two decades on, the episode has been reassessed in the light of the #MeToo movement, which has highlighted the sexual harassment and assault experiences of women, often at the hands of powerful men. The optics of a 22-year-old White House intern embarking on an affair with the US president, 27 years her senior, now looks very different to many.

Even the shorthand used to describe the scandal – the “Lewinsky affair” – put the woman at the centre of the story, not the president. A recent six-part TV series on the events, which aired on US network A&E last year, was called The Clinton Affair, its change of emphasis making an important statement.

Lewinsky will be in Dublin next week, where she is due to deliver the keynote speech at the Talent Summit, a human resources conference, at the Convention Centre.

Her appearance is part of her gradual return to the public eye in recent years.

I ceased being a three-dimensional person. Instead I became a whore, a bimbo, a slut and worse

In the immediate aftermath of the Clinton impeachment trial, Lewinsky moved to New York, launched a handbag line and briefly dabbled in advertising and TV. But in 2005, the psychology graduate moved to London where she studied for an MSc in social psychology at the London School of Economics and began a retreat from public life.

Ten years later she began a tentative return to the public sphere as an advocate for victims of cyberbullying. In 2015 she delivered a Ted Talk in Vancouver that went viral, though Ted’s social media editor at the time wrote that the company had never before witnessed the level of vitriol directed at Lewinsky in the wake of the talk.

“As I read hundreds of hideous comments, I suddenly realised I was being subjected to a tiny fraction of what Monica has experienced every day since she was 24 years old,” wrote Nadia Petschek Rawls. “I can only begin to imagine how profoundly these hateful comments must have shaped her self-worth.”

With the advent of the #MeToo movement, precipitated by accusations by dozens of women against once powerful male figures such as film producer Harvey Weinstein, Lewinsky again broke her silence.

In an opinion piece for the New York Times in May 2017 following the death of Fox News chairman Roger Ailes, who had been dismissed from the network the previous year over allegations of sexual harassment, Lewinsky recalled how the birth of 24-hour cable news channels in the US coincided with the Clinton affair.

“Their dream was my nightmare. My character, my looks and my life were picked apart mercilessly. Truth and fiction mixed at random in the service of higher ratings,” she wrote. “I ceased being a three-dimensional person. Instead I became a whore, a bimbo, a slut and worse. Just days after the story broke, Fox asked its viewers to vote on this pressing question: Is Monica Lewinsky an ‘average girl’ or a ‘young tramp looking for thrills?’”

The reassessment of Lewinsky 20 years after a scandal that convulsed the US, also has potential political ramifications, raising fresh questions about the behaviour of not just Clinton but also about the decision by most of the Democratic party to back him.

Senior figures in the party have in recent years been reassessing their support for the Clintons. Among the most high profile has been New York senator Kirsten Gillibrand who is running for the Democratic nomination for president next year. A strong advocate of women’s rights and an outspoken defender of the victims of sexual abuse, she is also a long-term ally of the Clintons and succeeded Hillary Clinton in her Senate seat in 2009.

But last year she broke with her long-time friends, stating that Bill Clinton should have stepped down at the time of the scandal. There would have been “a very different reaction” if the controversy had taken place in the current climate rather than the late 1990s she said.

Joshua Kendall, a biographer who is writing a book on US presidents and the #MeToo movement, says that over the past 20 years the dominant narrative about Clinton’s sexual misconduct has been that it was all much ado about nothing – a version of events authored by Clinton himself.

“The media has played a part in this. There was a sense that the media went too far in the other direction, focusing on the salacious details, and that his affair with Monica Lewinsky, though in bad taste, was consensual. But this ignores the other allegations against Clinton,” he says, citing the accusations by Juanita Broaddrick in particular, a woman who has accused him of rape.

Kendall says that the presidency gives men like Clinton – and Donald Trump who has been accused of sexual misconduct – immunity of sorts.

“Americans don’t like to face up to the fact that their leaders are flawed. Just as Trump supporters have a blind spot when it comes to the president’s failings, to this day Clinton supporters say that there is nothing to see here, and that the accusations of sexual assault are simply a vast right-wing conspiracy as Hillary Clinton famously said.”

The reappraisal of the Lewinsky-Clinton affair in light of the #MeToo movement has also opened up difficult questions about Hillary’s response to her husband’s infidelities. As the Democratic nominee for president in 2016 she became the symbol of hope for so many women when she came tantalisingly close to becoming the country’s first woman president.

“But her response to her husband’s infidelities – often attacking the accusers rather than the repeatedly unfaithful and arguably predatory man she had married – sits uneasily in the current climate. Though it surfaced around the edges of her 2016 presidential run, it would arguably hurt her campaign even more if she was to run this time around in the wake of #MeToo.

As for Lewinsky, her position on the controversy which unwittingly put her at the centre of one of the biggest political scandals in US history, has changed over time, by her own admittance.

In an eloquent article for Vanity Fair last year, Lewinsky – who only five years ago wrote that the affair with Clinton “was a consensual relationship” – seems to have reassessed the situation.

As she ponders the notions of agency and victimhood, control and power, she writes: “Now, at 44, I’m beginning (just beginning) to consider the implications of the power differentials that were so vast between a president and a White House intern. I’m beginning to entertain the notion that in such a circumstance the idea of consent might well be rendered moot.”

Rather than simply criticise Clinton, she also takes aim at Kenneth Starr, the independent counsel who led the investigation into the affair and whose team threatened the young intern with 27 years in prison if she did not co-operate.

Describing the isolation and fear she experienced during the controversy – “That I had made mistakes, on that we can all agree. But swimming in that sea of Aloneness was terrifying” she writes, Lewinsky believes she would not have felt so isolated if it had happened today, citing the #MeToo movement.

“One of the most inspiring aspects of this newly-energised movement is the sheer number of women who have spoken up in support of one another. And the volume in numbers has translated into volume of public voice. Historically, he who shapes the story (and it is so often a he) creates ‘the truth’.”

As for her own journey, she says she is still “unpacking and reprocessing what happened to me. Over and over and over again”. But ultimately she is sanguine about the future.

“I know one thing for certain: part of what has allowed me to shift is knowing I’m not alone any more. And for that I am grateful.”

What is all of that screen time doing to your skin?
Real news has value SUBSCRIBE