Sean Moncrieff: ‘When does spring start? I don’t know and neither do you’

The seasons are a personal thing. You have to choose the spring that’s right for you 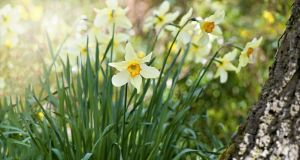 Daffodils make their annual reappearance, but when does spring actually begin?

Spring is a – cliché alert – time of rebirth. A time when the reassuringly familiar comes back into view: lambs gambolling in fields, buds emerging from the ground. And people arguing about when spring starts.

Go on: ask anyone. You’ll get at least three different dates. It could be February 1st, March 1st or in and around March 20th. It’s spring right now. Or it’s not.

At a time in human history when we have solved so many of our problems, (and caused so many more), we still can’t agree what season we are in.

There are four, possibly even more scenarios.

Scenario Two: go and ask Met Éireann. On the kids’ page of their website, which is replete with pictures of cute bunnies and various other images used in the mind-control of children, they claim spring starts on March 1st.

But like the rest of the fake-news media and climate change hoaxers, this is based on ‘science’: that being their data on what are the three hottest months of the year. They say June, July and August is the summer and so by elimination that makes March, April and May the spring.

But as we all know, astronomers and meteorologists hate each other. They’re always throwing each other serious shade. Which is why, if you look at the stars, you get a different date.

Scenario Three: there’s a lot of complicated stuff about the tilt of the earth and its rotational axis in relation to the sun, but the basic deal is that you have your summer solstice – the longest day of the year – but before that you have the spring equinox, where you have 50-50 between night and day.

Because of the aforementioned complications, the date and even the time of the equinox varies slightly from year to year. According to astronomers, spring will commence in 2019 on March 20th at 21:58, which is impressively detailed.

Scenario Four: spring is different in Ireland Amidst all the debates, this one comes up a lot. I don’t know if it’s true – and I didn’t bother to check – but a lot of people claim that kids in school are taught that spring starts on February 1st, and for no reason other than our pagan ancestors liked to think this.

According to them there are thousands, possibly millions of people on this island, only pretending to adhere to modern convention. But once the neighbours aren’t looking, they’re off on cattle raids and fighting Vikings. And perhaps because their badger-skin coats aren’t the warmest, they need to believe that spring has already arrived. Hope keeps them warm.

People seem to like this scenario as it implies that beneath it all, our savage Celtic hearts are still beating. (Except annoying science says that that this might not be true. Not that we don’t have hearts. There are some DNA studies that suggest that we’re not really Celtic, more Spanish, if you go out a few thousand years.)

But that’s not the point. The point is that the next time some bore tells you with absolute conviction that spring starts on a certain date, they are wrong. But also, right because there is no universally accepted start date.

The seasons, it seems, are a personal thing. You have to choose the spring that’s right for you. Or you could try using common sense.

Ross O’Carroll-Kelly: ‘We’re having a fancy dress porty and I’m going as the wife of a philanderer’

Ross O’Carroll-Kelly: ‘We’re having a fancy dress porty and I’m going as the wife of a philanderer’
6