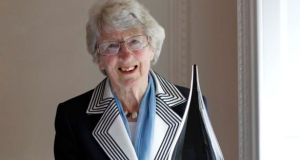 Moya Quinlan: extraordinary for her longevity, legendary for her legal career and loved for herself.

When Moya Quinlan qualified as a solicitor in 1946, she was one of just two women in a class with more than 50 men. Nevertheless, she would go on to become the first woman to be elected a council member of the Law Society of Ireland in 1968 and its first woman president in 1980. When she passed away peacefully at the age of 98 on February 12th, she left behind a transformed solicitors’ profession in which 52 per cent of all practitioners are women.

Although with characteristic modesty she never saw herself as a pioneer in her profession, the quiet power of her example and her gentle encouragement to generations of women solicitors undoubtedly contributed much to that transformation.

She had roots in a revolutionary generation. Her grandfather, Henry Dixon, was solicitor to Arthur Griffith, was interned in Frongoch and, as documents record, gave legal advice to Pádraig Pearse in his purchase of St Enda’s School.

Moya Dixon was herself born in the revolutionary period, in 1920, to Peggy (née Doorley) and Joseph Dixon. Following school in Sion Hill College in Blackrock, Dublin, near where she lived throughout her life in Monkstown, she began studying law with the Incorporated Law Society. She followed her father into the family solicitors’ practice, now Dixon Quinlan solicitors, in Parnell Square, where she spent her entire career.

She balanced her career with a full family life. She met a Kerry man, Michael Quinlan, who was an accountant with the Richmond Hospital, at the Galway Races and they married in 1952. Their two sons, Michael and Brendan, arrived within the next few years. She lived to see Michael succeed her as president of the law society, completing his term of office last November. Among many firsts, it was the first time a mother and son had both served as president.

Moya was continuously re-elected by the profession for an extraordinary 45 years as a member of the council of the law society. She topped the poll for many years and was elected to her final two-year term at the age of 91. Nowhere else in the world, as far as anyone else in Blackhall Place is aware, has there been an example of an elected member contributing actively to the governance of the legal profession in their 90s.

Her interventions in debate became more rare as time went on. But, even to the end, she would rise slowly to her feet and unerringly skewer a point that needed to be made.

Her contributions were always brief, clear and insightful. She had a very low tolerance for the unnecessary jargon and long-windedness of many lawyers and she did not suffer such fools gladly.

When she was elected president of the law society in 1980, before many of today’s council members were born, it was very rare for a woman to lead a professional body in Ireland or anywhere. For example, the first woman president of the Law Society of England & Wales wasn’t elected until 2002.

But Moya’s legacy in the law society extends beyond that achievement. She was a key supporter of her great friend Peter Prentice, another former president, in the acquisition of the Blackhall Place building from the King’s Hospital School and its extensive refurbishment to open as the law society’s new headquarters in 1978. This ensured the preservation of one of Dublin’s great Georgian buildings and her passion for Thomas Ivory’s 1783 masterpiece knew no bounds. It is, in a way, her monument.

Beyond Blackhall Place she had other legal passions. She was appointed by government as a member of the inaugural Legal Aid Board in 1979 and constantly campaigned for proper funding of the State’s obligations to finance the Legal Aid Scheme.

Education minister Mary O’Rourke appointed her as chairwoman of the Primary School Curriculum Review and her great friend, the late Dr Mary Redmond, appointed her to the first board of the Irish Hospice Foundation.

Perhaps most remarkable of all was her service, from its inception, to the Employment Appeals Tribunal established in 1977. She was the legal chairwoman of innumerable divisions of the tribunal, sitting all over the country hearing appeals against dismissal from employment and other employment law issues, for some 35 years. Indeed, she sat for the last time as such at the astonishing age of 93.

Her life was touched by great sadness with the untimely death of her husband, Michael, in 1981 in the month following the completion of her term as law society president. But she carried on, both with her family and career commitments, without complaint. She adored her home away from home in Ardmore, Co Waterford, and loved her walks there as much as she loved her walks on Dún Laoghaire pier.

Moya Quinlan was extraordinary for her longevity, legendary for her legal career and loved for herself. She leaves behind her two sons, daughter-in-law, six grandchildren, two great-grandchildren and a solicitors’ profession changed by a pioneering woman who never saw herself as such.

Coronavirus: ‘Like my anxiety, my survivalist mentality come and goes’
2