The day women demanded to eat at Trinity’s Dining Hall 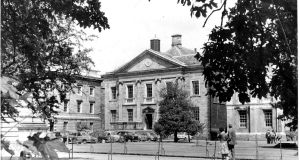 “This week witnessed a striking advance in the progress of the feminist movement in Trinity.” So began a report in the Trinity College Notes column of The Irish Times on Saturday, March 7th, 1931. The battleground was the Dining Hall in the Front Square of Trinity, and the fight was against the exclusion of women from the buffet at the Dining Hall, where food could only be ordered and eaten by men. But a handful of female students had male allies by their side, and concocted a plan where the men would order, and then the women would enter and eat.

Five female students, led by “prominent members” of the Modern Language Society, “invaded the buffet”, according to the report, “where they proceeded calmly to consume the lunch that had already been ordered for them by their masculine supporters. This unprecedented move produced consternation among the men students, for whom the pleasures of the buffet have hitherto been exclusively reserved.”

The students were removed from the hall by the hall’s superintendent, Miss Montgomery. “The five women students walked out with the self-conscious dignity of a Pankhurst being led off to prison by a posse of policemen through crowds of excited spectators.” Montgomery wasn’t necessarily the enemy, however: “It is understood that Miss Montgomery evicted the intrepid women students as a matter of duty, and is not averse from the idea of a mixed buffet. The feminist members of the Modern Language Society intend to agitate for this reform.”

The incident became the talk of the campus. The majority of undergraduates, the reporter wrote, “were amused, though some were inclined to take it as a serious menace to their liberty”.

The report went on to detail another “instance of the progress of feminism in Trinity”, with the Classical Society deciding with an overwhelming majority to admit women as “associate members”, making them eligible for prizes offered by the society. The following Friday that March would be a landmark one for the Venn diagram of students of the classics and supporters of women’s rights, as the first woman was set to address the Classical Society, a woman by the name of Miss Smyllie, who chose to read a paper on Pindar, the great poet of ancient Greece. “The present will not long endure,” Pindar once wrote.

To put this buffet protest in context, female students were only first admitted to Trinity 27 years previously, in 1904, when the first female student, Isabel Marion Weir Johnston, entered the university. Johnston established the Elizabethan Society in the college. Trinity has a long and storied history of sexism, with women banned from many major societies up until and throughout the 1960s. It wasn’t until 1963 that the first woman spoke at a Phil debate in the Graduates Memorial Building – the then president of the Elizabethan Society, Rowan Blake-James, according to a fine University Times article by Rachel Lavin in 2014. The other major debating society, the Hist, held out, only admitting female members in 1969.

It is not known whether the proximity to International Women’s Day (March 8th) was a factor in the protest, although the date would certainly have been on the radar of feminist campaigners and socialists in Ireland, ever since March 8th became a national holiday in Soviet Russia in 1917 when women gained the right to vote there.

The final line of the Trinity Notes column that day is also interesting. “Mr. Samuel Beckett, assistant lecturer in French, has written an excellent critical essay on Marcel Proust, which has just been published by Messrs. Chatto and Winders in their new ‘Dolphin Books’ series.” It was Beckett’s second significant appearance in The Irish Times. The first was the announcement of his birth in 1906: “BECKETT – April 13th, at Cooldrinagh, Foxrock, the wife of W.F. Beckett, of a son.” In the spirit of feminism, “the wife” was Maria Jones Roe.

View the article page in The Irish Times archive.

Rome vs Greece: a little-known clash of empires
8

TV Guide: 24 of the best TV shows to watch this week
Real news has value SUBSCRIBE