Leaving Latvia to make a life in Cork: ‘I am the happiest person on earth’

New to the Parish: Growing up in Latvia Diana Bucko’s dream was to join the police now she lives in Cork. And loves it. 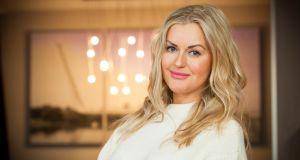 Diana Bucko: "When everyone else was leaving, I realised I had to move to." Photograph: Daragh Mc Sweeney/Provision

Growing up in Latvia Diana Bucko’s dream was to join the police.

“It was just something in me and nobody could understand where it came from. We had no one in the family in the guards, none of my cousins. My mum used to say I can picture you sitting in the office or the bank. She forced me to get a degree in accounting and economics. But I never worked a day in that area.”

More than a decade has passed since Bucko last put on her police uniform. She wistfully recalls the days she spent patrolling the streets of Riga with her colleagues as a happy, fulfilling time in her life. “I liked the people. We were young and I’d always wanted to do that. When you achieve what you want you’re just flying. Before the recession I could never imagine myself living in another country. Before the recession we were happy, we had money, we had work.”

Bucko moved to Ireland from Latvia in May 2008 on a trial basis. Her relationship with her husband had recently fallen apart and she was eager to make a new start at life.

“I never thought I would leave the police and they kept a place for me during my maternity leave. But then we got divorced and the recession happened and I said I won’t be able to live on this money. That was when everyone was leaving, I realised I had to move too.

Bucko explains that she asked her ex-husband to join her but he chose to stay in Riga. Many of her friends didn’t support her decision to leave her son with his grandparents while she investigated the opportunities available in Ireland.

“When I left, all of them were judging me. I’d left my son with my mum; it’s not like I left him with the neighbour. I said look, I have to try. It’s for my future and my son’s future. My friends all stayed in their workplace but I had to go. There was no money there. I know money is not everything but it’s very important and I had a small child. I wasn’t scared but a lot of my friends, they don’t like change. They don’t like going out of their comfort zone.”

Bucko, who was 25 at the time, found a job in a pub in Cork and moved in with some friends. After about six months she organised a creche for her son Artyom and brought him over to Ireland. She continued working in the pub while her friend, who shared the house, looked after Artyom. Bucko initially planned to join the Garda Síochána and took a course in police and security studies. However, when offered the chance to join a Garda training course in Templemore she turned it down.

You would never have this support in Latvia. But you can’t be constantly on social welfare

“My dream job was to be a guard but then you have to understand that sometimes you have to move on. My kid was too small, I couldn’t go there for six months. I had no family here, basically your hands are tied. If I went somewhere a neighbour looked after him. I couldn’t work with them.”

Bucko eventually decided to take a year off work to care full-time for her boy.

“I remember I was working in retail at the time and I had to bring him to hospital, he was constantly sick. I was also doing an assignment for college and he was asking ‘mum, can you play with me?’. He said ‘you’re constantly doing your assignments’ and I felt so guilty. So I decided I’m going to stay home with him.”

Bucko relied on social welfare support during the year she spent at home with her son.

“You would never have this support in Latvia. But you can’t be constantly on social welfare. You have to move forward. A lot of people come over here and stay on the dole but why? I don’t understand that. I hate lazy people, it drives me mad.”

“I went to the parent teacher meeting and they said ‘do you know what percentage he got in Irish, it was 90 per cent’. He’s a bit of a nerd but that’s a good thing. I think if you’re in an Irish speaking school you do better and he’s so excited about it.”

She tries to speak Russian at home to maintain her son’s connection with his family background but finds he prefers chatting in English.

“A few days ago I was downstairs watching a movie and my son was upstairs chatting with his friends and they were having a laugh. And in that moment I thought, I’m so happy for him. I can’t even explain it to you but it was hearing him being fluent in English. I felt so happy in that moment.”

Bucko is currently working in the accommodation section of the Cork International Hotel but is looking forward to starting training later this year in hotel reception work. “I have a diploma but I don’t have experience. It’s an 18 months course and they move you to different departments and between different hotels. It will help me to understand even more how it all works.”

After more than a decade in the country, Bucko strongly believes she made the right decision in bringing her son up in Cork. “It all works here. Even considering I’m a single mum it doesn’t bother me. The stupidest question I ever heard was ‘why are you constantly smiling, what’s wrong with you?’. I’m the happiest person on earth here.

“A lot of people around me are constantly complaining but if you find a job you love then you never have to work a day in your life. If you don’t like your job, then change it.”