I am not a huggy person. Don’t worry, my friend said. You can pretend to hug me

Hilary Fannin: I’m a lumpy, uncomfortable hugger, unless I am moved to hug at my own discretion 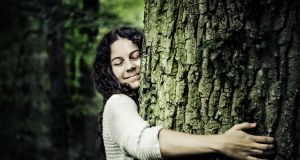 By the time we were being guided to giving the person closest to us a big positive-energy hug, I was positively hostile. Photograph: iStock

I was recently invited to attend a unique and uplifting wellness experience in a lovely old building in a trendy part of Dublin town that heretofore I hadn’t had much cause to visit.

The event, which was to launch a book written by a successful clinical hypnotherapist, was housed in the offices of a marketing company. The company, I read, has worked with some of the world’s biggest brands, helping them to understand and communicate with youthful audiences in “a hyperconnected world”. I take my deeply unattractive woolly hat off to any outfit operating in a hyperconnected world. Hyperconnectivity makes me want to snooze in the bath.

At the launch, in the agency’s spacious premises, there were healthy and toothsome cakes, a lovely young woman with alabaster skin gave me a bottle of a non-alcoholic, fermented beverage to drink, and it was all very convivial. People (mainly women, it must be said) slowly filled up the modish creative space, where a serene man sat on a low podium producing relaxing background music from a kind of home-made-looking harp.

There was also a thing called a “positivity tree” on the long table where people were putting their empty bottles of yeasty elixir. There were little cards next to the positivity tree (which was more bonsai than birch), cards with string attached. The invitees, myself included, were being encouraged to write down a happy memory and hang that memory on the positivity tree.

I gladly complied. (I don’t get out that often, and the bonhomie among this courteous crowd was infectious.) “Speaking to my dead mother,” I wrote, because that was the happy moment that sprang to mind. I remember feeling quite serene, joyous even, asking her corpse which of her gaily coloured scarves she wanted to be laid out in. Death can do that, I suppose; obliterate quotidian concerns, make you live in the moment.

I probably should mention that I was also wearing a big circular sticker on my chest that said “Calmness”. This was because when we’d entered the hip and innovational space we’d been asked to choose a sticker from a selection that included “Love”, “Gratitude”, “Happiness”, “Hope” and “Confidence”. The sticker we chose, we were told, should be the one that most closely represented the feeling we’d like to wake up with more often.

“Hope? Get a grip,” I said to her, before leaving her struggling to think of something positive and pithy to hang on the tree.

I wandered around to see what other people’s stickers said about them. Most of the gathering had, like myself, chosen the calmness sticker; in fact, so many people had chosen it that the stickers had run out, which may have been pretty stressful for the organisers. I was looking at the table, heavy with unclaimed happiness, when the event got into full swing with a guided meditation.

I tried, honestly I did. I closed my eyes when told to, and focused on my breathing. It’s just that, as the hypnotherapist was telling the assembly (in a calm and reassuring voice) that we “already have everything we need”, there was an announcement asking the owner of the black Mercedes that was blocking the exit to move her car. A woman in an attractive ensemble hopped up apologetically, and I found myself looking around the chi-chi space, which was amusingly decorated with a giant Anglepoise, and I thought: too right, we have everything, and now we can add prettily packaged mindfulness to the list along with our complimentary box of herbal tea.

I kind of lost concentration then. I probably wasn’t as receptive as I should have been to imagining the sunset and hearing the waves lap on the shore, and by the time we were being guided to count down to opening our eyes and giving the person closest to us a big positive-energy hug, I was positively hostile. Actually, I was positively panic-struck. It felt like it had only taken about 15 minutes to convert the entire assembly into a single compliant entity. I’m not a hugger. Well, I’m a lumpy, uncomfortable hugger, unless I am moved to hug at my own discretion.

“It’s okay,” my friend whispered, sensing my panic. “You can pretend to hug me.”

Walking through Dublin’s darkening streets after the event, we passed the Carmelite mission on Aungier Street. I watched elderly women emerge through the church door, their foreheads blackened with thumbprints. Ash Wednesday – I’d completely forgotten.

Forty days of mindful self-denial in a hyperconnected world, anybody? I can see it becoming all the rage.