New to the Parish: Nqobizitha Vella arrived from Zimbabwe in 2015 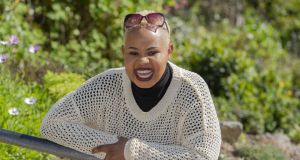 Nqobizitha Vella: “I tried going to college but they wanted me to pay non-European fees.”Photograph:Michael Mac Sweeney/Provision

In January 2018 Nqobizitha Vella arrived home from her asylum interview absolutely exhausted. She had travelled to Dublin to meet with immigration officials and lay in bed that night tossing and turning, desperately trying to calm her mind.

“I was stressed and couldn’t eat or sleep. Eventually I got up and decided to write a short story and posted it to Facebook. I went back to bed and when I woke the next morning my inbox was full of messages.”

Vella’s tale of marital breakdown had attracted the attention of dozens of readers both in Ireland and her native Zimbabwe after a woman shared her words to a couple of Facebook pages. When she read that people wanted more, Vella took out her tablet and continued the story, posting a new section each day. “It wasn’t at all about my experiences, it was a fictional story. When I finished I killed off the main character but people wouldn’t accept that. They told me no, you can’t, so I resurrected him.

I didn’t know what we were going to eat so I kept that sandwich thinking I’ll keep it for him, I’ll survive

“Ever since I’d got here I had nothing to do; I would exercise and read books but still I felt the vacuum. I tried going to college but they wanted me to pay non-European fees. Writing helped because I finally had something to look forward to. Every time I put my head on the pillow I was already thinking about what I was going to put in tomorrow’s chapter.”

Vella arrived from Zimbabwe in September 2015 seeking asylum in Ireland with her then six-year-old son. She remembers saving a sandwich from the plane for fear that she wouldn’t be able to buy food for her son in Dublin.

“I didn’t know what we were going to eat so I kept that sandwich thinking I’ll keep it for him, I’ll survive. When they took us to Hatch Hall there was lots of food and it felt like a weight had been taken off my shoulders. I’d been worrying about how to survive in a foreign country and when I saw the food and that we had a place to sleep I was relieved.”

After a week in the Dublin direct provision centre the mother and son were transferred to Ashbourne House in the village of Glounthaune on the outskirts of Cork city. Her son quickly settled but was confused by the steady stream of people leaving the centre once they were granted international protection. “One day he asked me ‘mum, those people just came and now they’re going already. What is it you’re doing wrong?’ I didn’t know how to answer that.”

Despite the long wait for a decision on their application, Vella also grew accustomed to life at the centre.

“There’s so much negativity around direct provision but I liked it. I’m a person who says direct provision shouldn’t end for many reasons. We had volunteers who came to teach English and help children with their homework. I saw people coming here with no English and now they can communicate, talk and laugh. If they were in a community straight away they wouldn’t get that kind of support. It also helps to be around people in the same situation as you. When I met people in the corridor and said I’m going for interview tomorrow I’d get a hug and a good luck. That really helps.

“The only problem I have with direct provision is the length of time people spend there. When direct provision was created it was only supposed to be for six months but when I first arrived I met a lady who had been here eight years.”

In October 2018, on her son’s 10th birthday, Vella and her son were granted refugee status. Shortly after receiving the news, the first volume of Vella’s story was published by a South African publishing house while her Facebook followers continued to soar into the thousands. She was also invited to contribute to a book entitled A Journey Called Home featuring stories, poems and photographs from people living in Cork. “In my short story I wrote about how I love the city. I was basically comparing Cork to Dublin. I used to go there for my interviews and I don’t like Dublin. The people in Cork are warm and kind, it’s a laid back place.”

Even if my son's spent most of his life here will he be able to get into any employment? I worry about that

In January 2019 Vella received her residency permit and began searching for a place to life with the help of Irish friends. “Every time I went to view a house they’d go with me and do most of the talking. When you call about houses they’d hear the accent and say the place has been taken but if someone else calls for you the place will still be there.” She also struggled to open a bank account and found the staff in the first bank she approached very unhelpful. “I gave her everything she wanted but it was the attitude she was giving me. I could sense that she didn’t want to help me. That’s only time I’d say I’ve experienced racism here, I could feel it.”

Vella recently moved into an apartment in Mallow and her son is attending the local boys’ school. She says the move from direct provision into independent living was exciting but scary. “It’s like when you’re moving out of your parents house. I’m going to miss my people at Ashbourne house, they’re like family now.”

Vella would like to find work in the media but has been advised to train in healthcare. “I’m scared if I venture into writing or media, which is basically what I’m good at, I won’t find anything to do. Writing short stories, script writing, I would really love to do that. But will I find work? Talking to people from African countries they’ll say if you want to find a job get into the health sector. They tell you any other place you won’t get hired because you’re black. I haven’t experienced that myself so I’m not sure.”

Vella also worries about her son’s employment prospects when he grows up. “I think he’ll be in the same situation as myself. Even if he’s spent most of his life here will he be able to get into any field? I worry about that.”