New to the Parish: Samer Arnous, a consultant cardiologist, arrived in Ireland at 17 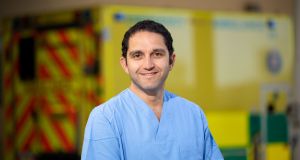 When Samer Arnous was 17 he moved to Ireland to sit the Leaving Cert. Having attended boarding school in Dorset as a child, the Syrian teenager was used to being away from his parents and was determined to study medicine abroad.

“I wanted to come back to Europe, but I had to do the Leaving Cert to get into university here. I was quite ambitious and wanted to be a doctor. I knew if I came to the UK or Ireland I could achieve that.

“It was difficult to get the visa to go abroad. I had a Syrian passport, but I was denied a US visa even though I was accepted into colleges. That was the reality of having a Syrian passport even then. People don’t realise how hard it is. I see young doctors coming here now from the Middle East and Africa, and it’s a huge deal.”

I loved Ireland straight away. There were certainly less foreigners back then; most people didn’t know where Syria was, and they assumed you had a Mediterranean background

Born in Saudi Arabia to Syrian parents, Arnous spent every summer of his childhood with family outside Damascus. When he turned eight, his parents sent him to an English boarding school.

“My brother was 16 years older than me, and at college in London, and convinced my parents to send me to England for better education. My parents came from poverty and had left school when they were young teenagers. Education was key for them; they wanted to give their kids what they didn’t have and certainly spent a lot of money on our education.”

The youngest student in the school, Arnous found life in Dorset difficult at first. “I was crying all the time and only saw them during the summer holidays. My mum visibly struggled. My father never told me how hard he found it; he didn’t want to show weakness. But as soon I had my first child I realised how tough it must have been on him. My eldest son has just turned eight, and I cannot imagine sending him 3,000 miles away.”

When he was 13, Arnous was moved to an English-language school in the city of Alexandria in Egypt. “It was hugely different to the UK. I was used to school that was structured, but in Egypt it was chaos. It was a jungle – survival of the fittest – but it was a very good life lesson.”

In 1994, after finishing secondary school, Arnous moved to Dublin on the advice of a family friend. He stayed in digs with an Irish family while he studied for his Leaving Cert at Griffith College.

“I loved Ireland straight away. There were certainly less foreigners back then; most people didn’t know where Syria was, and they assumed you had a Mediterranean background.”

Being the health minister is probably the toughest job in the country. You should give it to someone for 10 years irrespective of political change

After sitting his exams, Arnous enrolled at the Royal College of Surgeons in Ireland, in Dublin, where he spent the following six years. He spent another four years working in general medicine in Irish hospitals before moving to the UK to specialise in cardiology.

He spent three years in the UK and one in Denmark before returning to Ireland and now lives in Limerick with his wife and three sons.

“Ireland is a great place to raise kids. In Syria family values are so important, and it’s the same in Ireland. Irish people are genuine, and they care about each other. And the education system and sports are fantastic in Ireland. It’s a great quality of life for us and the kids.”

Arnous is now a consultant cardiologist at University Hospital Limerick. While he admits there are many issues within the Irish health service, he considers himself lucky to be part of the HSE. “There are great things about this country’s health service which never make the headlines. The quality of nurses and doctors is world class; most people are incredibly well-trained in Ireland.

“If you want to simplify the shortcomings of the health service you have to separate health from politics. Being the health minister is probably the toughest job in the country. You should give it to someone for 10 years irrespective of political change. When the health minister changes every three to four years, change won’t happen.”

He says the Government has done a “brilliant job” in leading the country through the coronavirus outbreak, while the Irish medical community “really stepped up to the plate and took it very seriously”.

“We knew that if what happened in Italy happened in Ireland we’d be in trouble. We prepared for the worst, and I’ve never been prouder to be part of the health system. Everyone pulled together.”

The collateral damage is becoming bigger than Covid damage; heart patients can’t wait four weeks. We’re trying to get beds back now, and doing virtual clinics, but it will take up to 12 months to get things back to normal

Arnous recently teamed up with the hospital’s consultant anaesthetist and vascular surgeon, along with three engineers from the University of Limerick, to design personal protective equipment for hospital staff. This included a shield to protect anaesthesiologists during patient intubation for ventilation and reduce the spread of Covid-19.

“We gave the engineers the ideas, and they went away and worked on it for 24 hours. We all designed it, produced it and 3D-printed it in 10 days. We made about 50 units and then made the design public; we didn’t want any financial gains. But it’s had amazing traction, and companies are now getting in touch to mass produce it.”

While Irish hospitals have successfully navigated the pandemic so far, patients with other health issues are paying a price, he says. “The collateral damage is becoming bigger than Covid damage; heart patients can’t wait four weeks. We’re trying to get beds back now, and doing virtual clinics, but it will take up to 12 months to get things back to normal.”

As a precaution during the pandemic, Arnous is trying to stay away from his children; not being able to hug or kiss his family is very difficult. He also thinks a lot about his mother, who is 83 and, fortunately, in good health.

“Ironically, the older you get the more you miss your parents, especially as they get older as well and you realise you have limited time with them. My dad died two and half years ago; he was elderly, so it wasn’t unexpected. My mum is constantly on my mind.”

Arnous brought his wife to visit Syria in 2010 but has been unable to show his sons where his family comes from. “The war started before they were born, so we obviously can’t go. I have Syrian parents, and I’ll always be proud to be Syrian. But I’m very much at home in Ireland. My best friends are here, I’m part of the culture now and I certainly don’t feel foreign here at all.”