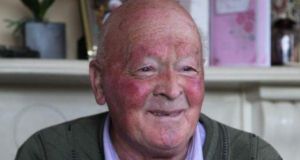 Tom Mulholland from Kilkerley, Co Louth, spent every day working the fields and building up his dairy herd.

Tom Mulholland was “not a number, not a statistic” but a husband, father of eight, grandfather of 16, brother, uncle, cousin, neighbour, friend and community man, according to his daughter Róisín Duffy.

Born on March 8th, 1936, Tom lived his entire life in Kilkerley, a small village just outside Dundalk. Tom was a farmer, and following his schooling, he worked with his father on the family farm. He spent every day working the fields and building up his dairy herd.

Tom married Margaret Conlon on August 1st, 1968, and they had eight children, James, Ann Marie, Thomas, Róisín, Mairéad, John, Claire and Eilish. Their friends and family joined them for a special golden anniversary Mass and celebration in August 2018.

Tom was a great athlete and represented Louth and Leinster at senior level. He continued to run as a veteran, and remained involved with athletics at an organisational level into his late 70s.

He loved all sports including GAA, and was an honorary president of Kilkerley Emmets GFC. Some of his proudest days were watching his children play Gaelic football and camogie at all levels for club and county.

In his later life, Tom enjoyed going on organised farming holidays with Margaret to Portugal and Italy, and loved meeting new like-minded people from all over the country. A highlight on the couple’s social calendar was the Galway races, which they travelled to with friends every year.

Tom died on April 20th in Our Lady of Lourdes Hospital, Drogheda. He had been admitted on Easter Sunday from Dealgan House Nursing Home, the facility taken over by the HSE on April 17th as it struggled to cope with an outbreak of coronavirus.

“A life-long pioneer, Tom was a gentle man who always took time to listen and then speak with whomever came his way,” says his daughter Róisín. “Not a number, not a statistic, but a much loved, much missed man who always gave more than he ever looked for.”