Eoin O’Malley obituary: A proud Gaeilgeoir and a ‘fiend for chocolate’ 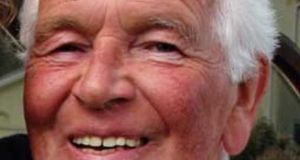 This article is one of a series about people who have died with coronavirus in Ireland and among the diaspora. Read more at irishtimes.com/covid-19-lives-lost. If you would like a friend or family member included in the series, please email: liveslost@irishtimes.com

As a proud Gaeilgeoir, Eoin O’Malley’s favourite saying was “Tóg go bog é” – “take it easy” – and they were among the last words he spoke.

His son Mark fondly remembers a GAA-loving father of conflicting allegiances, a man who dabbled in several careers and who maintained a natural curiosity in life.

He was born in Cork on May 18th, 1936, and although raised in Cahir, Co Tipperary, Eoin held onto his Cork roots.

Most of his life, however, was spent in Dublin. In 1959, he married Deirdre McKinney. They went on to have four children: Gregory, Mark, Joseph and Michele. Over the years the family lived in Terenure, Leopardstown, and on the South Circular Road in Dublin City, but for most of his life in Deansgrange.

He had a number of careers, with stints in the Garda Síochána, Irish Rail and even with John Hinde postcards. When he retired he had been running his own carpet business.

On the way to his funeral, the gardaí stopped his family due to Covid-19 public restrictions. “He would have laughed at that,” said Mark.

His son also noted that his father had a mixed pedigree as a GAA supporter. He played a lot of football in Tipperary but later, after moving to the capital, became an ardent fan of the Dublin team.

He is remembered as a “wonderful caring and sweet grandad”, an avid crossword fan and a “fiend for chocolate”. He aged with grace and humour, “always joking that he didn’t know if he was 83 or 38”.

With a thirst for knowing about things, he was known for regularly looking up an atlas, says Mark. And while he enjoyed a few pints at the Magic Carpet pub in Dublin’s Cornelscourt, he hadn’t actually been there for about 20 years.

Life took a slight turn when at the age of 44 he suffered a heart attack, eventually retiring at 55. “He walked everywhere and he was extremely well known; out walking he met a lot of people,” Mark says.

After his funeral between 40 and 50 neighbours and locals gathered, at a safe distance, outside his home as a mark of respect.

He had 11 grandchildren and over the last 10 years had enjoyed the company of his friend Mary O’Connor who he had met at church in Cornelscourt.

On April 19th, at the age of 83, Eoin died at Newtownpark nursing home close to his carers.