‘Doctors can’t explain how I got pregnant. I didn’t have periods. I didn’t ovulate’

New to the Parish: Lavinia Puicar was told as a teenager she could never have children 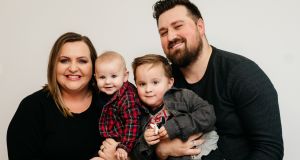 Lavinia and Adrian Puicar with their sons Jake and Isaac. Photograph: Loredana Chidean

On Christmas Eve of December 2011 Lavinia Puicar called her mother in Romania. She and her husband Adrian had arrived in Ireland one month previously with very little money and relied on the “reduced to expire” basket in supermarkets each evening to buy food for dinner.

“When I called my mum we literally had half a cabbage and block of butter in our fridge. But I told here we were doing fine. My parents couldn’t support us, I was not about to call and say it’s tough out here. We were at rock bottom back then. The 8pm reduced products were life-savers for us because we were literally living off €1 a day.”

That same evening the couple went on a walk around the north Dublin area where they were living and ventured into a nearby church. “It was our first Christmas away and suddenly I heard some music I recognised. We went inside and spoke to people and a family invited us for a lovely warm, Christmas dinner the next day.”

Born in the city of Cluj Napoca in Transylvania, Puicar grew up in a musical household and attended a school focused on art and music. “My parents could see me drawing and knew I was going in that direction with my singing because I always had a microphone in my hand.”

When she was 18, Puicar met Adrian in the local church. “We met through singing, he was the guitarist, and I fell madly in love with this guy. He had the same dream as me, we wanted to get out of here. After school we got married literally straight away.”

Having grown up in a very religious family, Puicar often felt stifled by the conservative nature of the people around her. “We were Pentecostal and there were a lot of rules and regulations. Being an artist you don’t normally fit in with a group of religious people. When it comes to religion I just believe in God and the bible. I didn’t want to be put in a box.”

Shortly after they were married, the couple moved to the Netherlands to start a new life together. However, they struggled to settle in their new home. “We had some friends there and thought it could be our future but we experienced a lot of racism.

“I’d been to Spain and Italy before where people were warm and welcoming but I’d never dealt with people from northern Europe. When you said you were from Romania they didn’t want anything to do with you.”

After a few months the couple re-packed their belongings into their car and accepted a friend’s wedding gift of a ferry ticket from France to Ireland. Upon arrival they drove around the city until they found a room to rent in Cabra.

“We were in a house with about 3-4 little studio apartments. The walls were covered in grease and there was this big hole in our wall. It was tough and rough.”

The couple also quickly discovered Romanians did not yet have open access to the labour market without a visa, a right that did not come into effect until mid-2012. However, Adrian managed to find short-term employment as a cleaner at St Patrick’s Cathedral.

“He had been working for a leading IT company in Romania and was cleaning public toilets. It was the worst job you could have but you have to do it because you need to start somewhere.”

A few months later Adrian was offered a managerial position with the cleaning company while Puicar made money through babysitting. “There were two families in the same house and they’d bring the kids together every morning which was amazing because it was two salaries in one. The kids taught me English, it was the perfect way to learn.”

In 2013, the couple took out a loan and bought the cleaning company when the owner decided to step down. Five months later, all the equipment the Puicars had invested in was stolen overnight.

“It was a huge slap in the face and we were back at zero because the equipment had so much value. But I was like, we’re not going to let this knock us down. I promised our clients we would still deliver their cleaning and we just started from there again.”

Having been told as a teenager she could never have children, Puicar was confused when she started suffering morning sickness in 2016. She visited the doctor but was assured she could not possibly be pregnant. A couple of months later she fell while snowboarding in Romania and ended up in hospital.

“They were doing a scan and suddenly the doctor turned the screen and there was a baby inside my belly. I was almost four months pregnant. Even now doctors can’t explain how I got pregnant. I don’t have periods, I don’t ovulate. I can’t really explain it, Jake is our miracle.” Two years later Puicar became pregnant again and in 2018 Isaac was born.

As the family’s cleaning company developed and grew, Puicar dedicated more time to her music, particularly at the Lighthouse Church in Blanchardstown, a Pentecostal Christian religious group which practices its faith through what is called ‘Hillsong music’. She is now the church’s managing director of music and has worked with a number of young artists trying to forge a career.

She recently started working with Lindsey Holmes Publicity following an introduction through a musical client of the cleaning company. “She basically taught me how to manage bands and how music works in Ireland. Music is a big thing here and there’s a huge platform for artists. For me working with them was my passion.”

Given the diversity of people who attend the church, Puicar tends to work with musicians from immigrant backgrounds. “They’re all born here in Ireland but because they’re black or Asian looking people always ask ‘where are you from’? But they’re all Irish. I have citizenship now but they’re more Irish than I am.”

Puicar says her understanding of Irish art and music has helped her feel more at home here. “I feel part of this country, this is my family now. I know all the music venues and museums here inside out, I just feed on that cultural energy.

“Our culture is more shaped by arts and humanities than by politics. Music is healing and an expression of our humanity. It’s something we’re all touched by no matter where we come from.”