Dawn O’Porter: ‘I feel like I threw away a couple of years’

O’Porter talks about her confidence crisis, her writing career, and her marriage to ‘big hairy Celt in a lumberjack shirt’ Chris O’Dowd 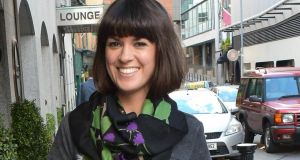 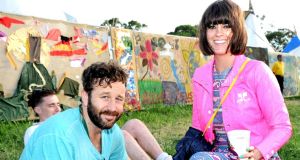 When you’re married to the greatest love of your life and the only thing you would change about yourself is your “flat bum”, life is good. “How lovely for a woman to feel her husband fancies the pants off her,” says Dawn O’Porter, who added the O’ when she married Irish actor Chris O’Dowd in 2012.

Meeting Chris O’Dowd was “love at first sight for me. I was dancing with my dad. He’s the Irish version of my dad, a big hairy Celt in a lumberjack shirt with this wingspan. I said to my sister: ‘I think that’s the guy I’m going to marry’.”

Eight months later, O’Dowd moved in – too soon, she thinks now – but living in LA, nothing felt quite permanent and real.

Three years ago, when O’Dowd shone in Bridesmaids , O’Porter was at her lowest. “Being with Chris and his success is one of the reasons I lost a lot of confidence. Spending every day with someone who is achieving every dream and you’re not – I spiralled on that for a little bit.”

Before meeting O’Dowd, she had arrived full of hope in the City of Angels, committed to living in LA for a TV documentary series, but Channel 4 left her hanging. Having made quirky Louis Theroux-style documentaries on breasts and polygamy, she hadn’t made a TV show for three years.

She had “the biggest identity crisis ever”, dyed her signature glossy brown bob red and stopped wearing vintage clothes. “I was really sad, a victim of circumstance, and I wallowed. I wish I’d taken stock and focused on the good things that were happening in my life. I feel like I threw away a couple of years by moping around.”

When introduced on O’Dowd’s arm and asked what she did, she would “give some pathetic answer. Christopher was supportive but he had to be able to have his moment as well, so I didn’t think he was aware of the full extent of how sad I was feeling. I didn’t want to ruin his happiness – our relationship is stronger when we are both happy.”


Catharsis and confidence
Becoming an author “changed everything”, and she got her confidence back. Hotkey books commissioned her two semi-autobiographical, sexually explicit novels for teenagers. The first, Paper Aeroplanes , which was shortlisted for a Waterstone’s award, is a catharsis in which she processed her mother’s death from breast cancer when Dawn was a child. “I look like my mother. I feel I am her.”

The second in the four-book series, Goose , has just been published here. Inspired by the way reading Jeanette Winterson’s Oranges Are Not the Only Fruit made her feel as a teenager, O’Porter explores grief, families and the embarrassments of being a confused teen, complete with blow jobs, “fanny farts” and bleeding through white jeans.

The character Renée is closest to her. “Foot in mouth, acts before she thinks, wild.” The teenage characters in the first two books, also inspired by her friends Louise and Carrie, will grow up and feature in two novels for adults.

Her agent got her a meeting with the head of Channel 4, Jay Hunt, to settle whether they wanted her or not, and Hunt snapped up O’Porter’s idea for a TV series on vintage clothes with a tie-in book, set for June. Today Porter is wearing an amazing vintage circle-skirt printed with planets and comets in neon colours, one of a collection of 450 garments that she will be selling as part of her new clothing line, Bob, which will also have new garments modelled on her favourite vintage pieces, also launching in June on her website.

She is also writing a comedy film about her arrival in LA, with TV presenter Dermot O’Leary’s wife, Dee Koppang, producing it. O’Porter’s creative ventures are entirely extensions of herself, which she shares constantly with her 400,000 Twitter followers. “If I didn’t spend so much time on Twitter, I’d have written about 400 books, but it’s addictive and I love it.”


The importance of being honest
O’Porter hopes that being honest and open will prevent her being torn down. “We exist in a media that’s obsessed with feminism, but as soon as there’s an opportunity to bring down a woman at the top, we’ll do it. People want to go home, turn on TV and be entertained, but they despise the hard-working people who bring them that, and I think it’s disgusting,” she says.

Where does she want to be in 10 years’ time? “Full-time writing books, with a successful clothing company – potentially we will have some babies by then, loads of dogs, goats and chickens, a domestic farm – Christopher is going to have to start loving animals.”

Goose is published by Hotkey Books

What was your rock-bottom moment? Before I started writing Paper Aeroplanes and I had not had a TV job in a long time and my column had been cancelled – three years ago.


How important is it to be liked? Very to me . The older I get, the less I care, but when I was a teenager and throughout my 20s being liked was very important – exhaustingly so.


When are you happiest? When I’m 10st 2lb and I know my sister and her family are happy and I’m in with Christopher on a Saturday night eating a curry and watching reality TV.

What trait do you most deplore in others? Jealousy.

Greatest fear? Lying on my deathbed and thinking I didn’t do the things I wanted to .


What living woman do you most admire? Eleanor Bergstein. She wrote Dirty Dancing and I am very privileged to have become her friend. She is an old-school strident feminist and she is my oracle on love and on writing.