New to the Parish: Mo Nader arrived from Egypt, via Bristol, in 2014 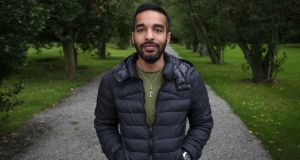 Mo Nader was 15 years old when the Arab Spring protests broke out in his native Egypt. Having grown up in Saudi Arabia, the Egyptian teenager was keen to return home and take part in the revolution unfolding across the Middle East. Just a month before his grandmother had died from cancer, leaving a note in her will that her grandson be encouraged to pursue his dreams.

“It was a very sentimental wish. I was very close to her. My parents thought this could be an opportunity for me to take part in something drastically different.”

Widespread flooding in the Saudi Arabian city of Jeddah had led to the unexpected closure of schools and so Nader’s parents sent their son on a trip to Egypt.

“They knew we had family there and trusted me enough to stay away from all the skirmishes. They knew it was a different atmosphere, that everyone was helping each other out. But there were fights everywhere and nowhere to protest peacefully. The uprising brought out the best in us but we also went through the worst moments of our lives.”

I didn’t necessarily believe in abortion rights, women’s rights or gay rights before. That’s what I was taught, I didn’t know anything else. I hadn’t experienced other cultures

Eight years on, Nader views the month he spent in Egypt as the catalyst for his interest in politics. Like the many millions of young people who took part in the spring uprising, he continued to raise his voice against the establishment on Twitter and Facebook even after he returned to Jeddah and went back to school.

“I was participating through social activism online. It didn’t help that the current regime has online investigators who basically monitor people who speak out against the military. They can either take their profile down or simply go after them. They’ve even passed a law now that if you have a certain amount of followers you will be monitored.”

Nader was in his late teens when he arrived in Ireland in 2014. He had spent a year studying engineering at the University of Bristol before he moved to Dublin for a study-abroad programme. “I was about halfway through the year when I decided Dublin was a much better city to live in; there were more opportunities and it felt more international.”

Nader secretly transferred to a law degree, fearing his family’s disapproval at his decision. “In the Middle East you study what your family tells you. Otherwise you’re considered a disgrace. Obviously they weren’t happy but then they saw I’d got my life together and had started to build a career so they ended up accepting it.”

Nader quickly settled into student life in Dublin and joined the Social Democrats party along with taking part in the campaigns for same-sex marriage and the abortion referendum. “I’m not ashamed to say that I didn’t necessarily believe in abortion rights, women’s rights or gay rights before because of the environment I grew up in. That’s what I was taught, I didn’t know anything else. I hadn’t experienced people from other cultures.

“What changed me was meeting people who were different to me. My mum wasn’t thrilled when I started doing the Together for Yes campaign but I just told her it’s the right thing to do. Why can’t a woman have access to abortion? Why can’t a person marry whoever they want?”

Despite growing up in the inherently male-dominated Saudi society, Nader still regarded his mother as a feminist role model. “She believed that women should have more rights and taught me to respect women. In 2011 in Egypt I saw women not being treated as second-class citizens for the first time. They had the right to speak and be political. That’s when I started to re-think and criticise everything I had believed.”

Earlier this year Nader started applying for jobs in Ireland ahead of his graduation from Griffith College. He quickly discovered finding skilled work as a non-EEA national was more complicated than he had anticipated.

“Companies only want people who already have their Stamp 4 because that doesn’t require a work permit. Stamp 4 is like the Irish green card, it’s the holy grail of immigration.”

My friends here can just travel whenever they want, but I can’t have it because I was born in the wrong place at the wrong time. I need a visa to go everywhere

He has also found many employers did not understand the State’s convoluted stamp system for non-EEA nationals. “Even immigration lawyers can be confused and you have to keep going back and forth with the INIS (Irish Naturalisation and Immigration Service). So you can see why a company wouldn’t want to deal with that.”

Nader recently did a series of interviews for a trainee position at a large accounting firm but was eventually told the company could not offer him the position because of the Government’s labour market needs test. Under this policy, jobs must be offered to skilled Irish or EEA nationals before going to non-EEA nationals. He tried negotiating with the company and offered to pay all sponsorship costs through his salary but was not successful.

“I feel like I’m not being judged on my merits or how hard I work, I’m judged on my nationality. I think the system is entirely wrong and discriminatory.”

Nader is also frustrated by the restrictions he faces when travelling. He says the drawn-out process of gathering paperwork every time he wants to visit a friend overseas has taken a toll on his mental health.

“I have lived all my life away from my closest friends. When I was in Saudi Arabia my friends were in Egypt, when I moved to England I was far away from my family. I have friends here in Dublin but most of my close friends live in Germany. My friends here can just travel whenever they want and that’s great for them but I can’t have it because I was born in the wrong place at the wrong time. I need a visa to go everywhere.”

Nader recently discovered that his online criticism of the Egyptian government had been brought to the attention of the authorities and he was advised not to return home. “I don’t have a big following online; I’m a nobody with about 200 followers. I’m just a person expressing his opinions. But now I’m applying to any job possible to stay in Ireland because I can’t go back.”

While he would prefer to remain in Ireland, Nader is worried he may have to move to another European country if he cannot find work. “It’s sad because I was trying to build my home here but unfortunately the system doesn’t allow that. Who knows, maybe everything will get sorted. But for now that doesn’t look likely.”

Prepare for ‘new normal’ of paying subscriptions for optional extras
7