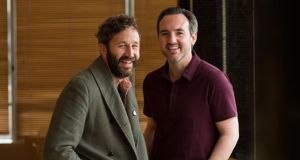 Chris O’Dowd and Nick Murphy are glorious migrants. Both have recently relocated, with their families, to Los Angeles. Both are aware that the planet is in flux and that people are shifting from place to place, mostly through necessity and adversity.

Their new book, Moone Boy: The Fish Detective, tells another story from the life of Martin Moone, the small-town 12-year-old they created. “Thematically, it is a book about outsiders,” O’Dowd says; it features foreign workers who arrive to work in a fish factory in a small Irish town.

The workers are from Brazil. “We got inspiration from Gort, in Co Galway, where there is a huge Brazilian population,” Murphy says. O’Dowd thinks that many migrants experience similar things. “It’s the same as Kilburn. For whatever reason, migrants tend to congregate in one place.”

Despite the fact that the new book is centred on a fish factory, O’Dowd and Murphy decide on meat-based dishes when we meet for lunch. Chris orders chicken pie. Nick goes for sausage and mash.

So what’s the story with Moone and his imaginary friend, Sean Murphy, played in the Sky TV series by O’Dowd? “I think that there’s something interesting in the boy-man thing. In this book we are looking at a lot of grown-up stuff from a child’s perspective.”

Caveats flying, O’Dowd adds: “Not in any way to associate ourselves with that book, but they do a similar type of thing in To Kill a Mockingbird. I mean, how does innocence deal with things that are above their station, in a way?”

“The character of Scout had such a simple logic, and Martin has that as well,” Murphy says. “We’re dealing with issues of prejudice in a small town. Martin doesn’t understand why somebody just moving from one place to another might create issues in the adult world. Martin rightly sees it as a silly fuss about nothing.”

Racism is unnatural, O’Dowd says. “It is kind of driven into people, so it’s interesting when somebody hasn’t developed those instincts yet.” Martin Moone hasn’t a racist bone in his body, but Moone lovers will be pleased to hear that he is “still an idiot”, according to O’Dowd. The plot of the new book revolves around Martin having to get a job to feed his Game Boy habit. Have you any advice about how to get a job, I ask.

“I think lying always helps,” O’Dowd says. He recalls blagging his way into working at an American cocktail bar in Paris. “The place was heaving, and I went up and asked if I could have a job, and the guy said, ‘No, we don’t really need anybody.’ I kept pushing him, and he said, ‘Okay, come in tomorrow.’ I went in next morning and he didn’t show up, so I went up to this woman and said, ‘I’m supposed to be starting work today.’ So she gave me a T-shirt and I went behind the bar.”

One of Murphy’s first jobs was in the central Dublin hotel in which we are talking. So you’ll definitely be leaving a big tip, I say.

Moone Boy: The Fish Detective is raucously funny. It will be well thumbed by many a parent before it lands in Junior’s Christmas stocking. Set as the 1980s morph into the 1990s, it touches the fall of the Berlin Wall, but it definitely isn’t This Is Ireland ’90, Murphy says.

Lest we forget, football remains part of Martin’s story. Anyone called Martin Paul Kenny Dalglish Moone, and who is at peak Panini sticker-collecting age in a World Cup year, can take that as a given. O’Dowd’s brother took Kenny as his confirmation name. Before ecclesiastical purists ask, St Google confirms that there is a St Kenny.

Can we take it that O’Dowd is a Liverpool fan? “Yes,” he says. Will Klopp ignite the Kop, we ask. “Or will he be a flop?” suggests O’Dowd, getting into the spirit of things. He is “incredibly optimistic”, he says.

O’Dowd has proved himself on the pitch – in his case a Gaelic pitch, when he lined out for Roscommon at minor level. Murphy went to Kilkenny College but showed no aptitude for its main sport, rugby, he says.

“I was not good. I was basically on the E team. They formed a new tier for me and my buddies because we were so bad.” “Was there an E team?” an incredulous O’Dowd asks. “Yes, and I was one of the stars,” Murphy says.

Now it is back to the United States, where they have “signed on to write a big studio animation feature”. And back to their new sons – O’Dowd’s son, Art, was born in January, and Murphy’s second son, Jules, joined Leo in March.

Have they any advice to offer their brand new boys?

“Stop screaming at me,” O’Dowd offers. “Why don’t you have a proper Irish accent?” Murphy wonders of his Californian boys.

Fatherhood has been a revelation for O’Dowd. “That huge weight of responsibility is quite overpowering. I didn’t know it was going to have such a visceral effect, but you do suddenly realise that it’s not about you. That has been interesting.”

Has Murphy given you any advice about how to be a good dad, I ask.

Moone Boy: The Fish Detective is published by Macmillan