Her book Sex Power Money balances the informative, the weighty and the laugh-out-loud funny 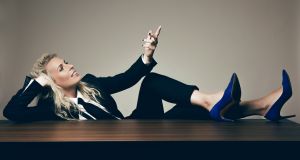 Sara Pascoe: “Culturally even, you have shows like Friends or Sex in the City that are imbibed along with like fairy stories, which are all about The One.”

The day after her book launch party, Sara Pascoe is unexpectedly spritely. It helps that she looks the part, with pastel pink hair, a brightly patterned shirt and a yellow skirt that brings sunshine to her publisher’s book-laden London office. But it’s mostly because she’s in a middle of a hectic few days on home turf, squeezed between a recent visit to Georgia and an imminent one to Cuba, both for her upcoming BBC travel series The Last Woman On Earth. So thank heavens for friends who’ve got your back.

“Aisling [Bea] checked in with me today, asking if I was okay,” Pascoe says of the Kildare comedian, currently making waves with her new television show This Way Up, when I mention the connection. “She’s very conscious of it, especially because she’s so busy and works so hard. She was like, ‘tell them when you’ve had enough, cancel things, have a massage’. She’s one of those people who can solve any problem you have.”

Firmly established in the highest rungs of comedy, Pascoe (38) cites Bea, Katherine Ryan and Roisin Conaty as her besties. Her gang also includes 2019’s Edinburgh Award nominee Jessica Fostekew and her university friend Cariad Lloyd – “but I’d really hate if it looked like a clique. When you meet a new woman who does stand-up, it is instantly like, ‘Yes! In the gang’. Because you know the logistics of the job: they travel a lot, it’s lonely in dressing rooms, you know that they have bad gigs. That means they don’t have to prove themselves to me.”

Her illustrious company is only natural, given Pascoe’s job often involves mix’n’match panel show line-ups, which she views as “my social life, really. I like the people I work with, I get wine in a mug, and I get to buy a new outfit.”

Setting herself apart from other current comedy favourites, she’s most recently found a niche of evolutionary biology. Unlikely bedfellows sure, but her 2014 Edinburgh show Sara Pascoe vs History proved it could be done on stage, and in 2016, Animal: The Autobiography of the Female Body, wove biology, psychology, relationships, memoir and opinion together in the most hilarious and accessible of ways.

The book deep-dives into the central theme that there’s a disconnect between the lifelong relationships that society expects, and the short-term relationships that we’re biologically built for – which results in jealousy, notions of failure, cheating, and the like. It’s formed the basis of much of her work since, like her stand-up tours and the BBC short Sara Pascoe vs Monogamy, which swung between insightful and absurd.

Sample paragraph, about women’s lack of reproductive signalling: “The anthropologist Boguslaw Pawlowski suggested that bipedalism may have extinguished our fiery loins because significant areas would have been hidden from sight unless we bent over. It’s a curious theory and I like the guy’s name, he sounds like an evil dog. I’d also like to reverse the theory and argue that women learned to walk upright cos they were fed up of guys looking at their fanny.”

Altogether, it adds up to the idea that we should understand our natural inclinations and respond accordingly – whether that means legislating for the sex industry, or tempering our expectations of relationships.

“Culturally even, you have shows like Friends or Sex in the City that are imbibed along with like fairy stories, which are all about The One,” she says. “Then we feel like we’re looking for it, and if relationships end, what we’ve experienced isn’t valid.”

The happy-ever-after has been elusive to Pascoe so far, which helped spark this interest in the biological basis of male and female dynamics. But I wonder if the act of thoroughly researching it has crept into her own relationships since. (She split from her partner of four years, comedian John Robins, in 2016 – the subject of her show LadsLadsLads – and is now dating Australian comic Steen Raskopoulos.)

“I think that’s something that we all have to go through,” she says. “There’s this odd thing, isn’t there, where you can be having a lovely time, and then almost get this sadness of ‘this won’t last forever’. But also it’s good to question if a relationship is fulfilling you. Our recent ancestors didn’t have that luxury. It was like, ‘you said in church when you were 12 that you would marry them, and now you’re married, so till the field’.”

Pascoe and her two sisters were raised by her mother in east London. Her father, a musician, left the family home when Sara was 12, and now lives in Australia with his wife.

As discussed in her books and stand-up material, her mother – who has a PhD in genetics and worked for the NHS (she now runs Sara’s merch shop) – was “very, very open with all of us, but especially me as I was the eldest” about sex and all it entails.

“I was 11 when she was hitting her sexual peak of her early 30s and discovering things about herself, so I was aware of certain things,” Pascoe says, meaning the importance of female pleasure in sex, in all its forms. “I think I found it excruciating at the time but I look back and I think it was instrumental in me being interested in these topics.”

Her sisters are settled now, and the core family remain close – they were among the guests at the previous night’s book launch. They’re also the “jumping-off point” for Pascoe’s upcoming sitcom, to air on the BBC next year. Pascoe is certainly going through a purple patch; she’s also hosting Comedians Giving Lectures on comedy channel Dave later this year.

“I want the sitcom to have a spirited curiosity – about wanting to understand people, but also about being slightly unconventional,” she says. “Like, what happens if you are a person who doesn’t get married or doesn’t have children, but everyone’s doing that around you?”

The casting takes place in the coming weeks, with Pascoe in the lead role. And it’s here I can’t help but mention the “F” word. Rather than roll her eyes at the connection with Fleabag – the stage show turned TV show that’s now the point of reference for all female-led stage or TV shows – Pascoe is enthused. She believes it “isn’t just a huge thing for women, but a huge thing for comedy in general” and the trend it’s created is only a positive.

“Because we live in a capitalist society, when Caitlin Moran wrote her book [How to Be a Woman, in 2011], she proved there was this massive market for women who wanted to read funny women writing about their experiences. My first book being published was very much in that wave of publishing. Very similarly, Fleabag is a great benefit. Before, a commissioner would think, ‘Oh it’s a woman’s thing. It’s a woman talking about her things again.’ But [Phoebe Waller-Bridge’s] Fleabag and Killing Eve were as loved by male critics as female critics. We’re not a subculture, and they prove it.

“The only reason you would hate to be compared to Fleabag is if you were said to be ‘not as good as Fleabag’. I guess that happens. One-liner comics get compared to Jimmy Carr. But just imagine if someone was to talk about Romesh Ranganathan and go ‘he’s no Nish Kumar’. That’s so lazy!”

Róisín Ingle: I’m menstruating as I write this. And I’m mad as all bloody hell
4

Does sitting down fool our bodies into thinking they weigh less?
Real news has value SUBSCRIBE