Tammy Nguyen arrived from Vietnam in 2007 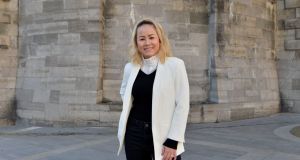 After Tammy Nguyen moved here from Vietnam she had a tough time, but now her life is good, she says. Photograph: Alan Betson

When Tammy Nguyen told her family she had met an Irish man and was moving to Ireland to live with him they were extremely unhappy. Her mother warned that marrying a foreigner would give her a bad reputation while other family members said if the relationship ended, no man would ever want to date her.

“They were shocked when I told them; they hated him because they wanted me to marry a Vietnamese man. My parents were always very strict. I wasn’t allowed to hang out with friends at night, and my father was afraid I’d go off and get pregnant so he kept me tight under his nose.

“I was always fascinated with moving abroad. We had family in France and America. Maybe I wanted to get away from my strict parents and have a better life. I knew they loved me but I felt stuck. I felt I couldn’t do anything with my life and I had to be obedient all the time.”

Nguyen, who was born and grew up in the city of Hué in central Vietnam, had completed a degree in accountancy when she met her Irish boyfriend, who was backpacking through the country. He returned a number of times to visit, and then the couple became engaged.

“Back then in my city you weren’t allowed date or stay over in someone’s house without a commitment to marriage. It was like Ireland years ago: you only make a commitment to one man. So we had a big engagement party so I could get permission to visit Ireland.”

Nguyen arrived in a cold and wet Cork city in January 2007 on a three-month tourist visa, but struggled to settle into her fiance’s lifestyle. “He was working during the day so I did the cooking and cleaning, which was very new for me. I’d been spoiled before. I was really lonely and missed my family so much.”

Nguyen briefly returned to Vietnam before securing a longer-term visa to live in Ireland. However, the financial crash that followed soon after made it very difficult to find work. Nguyen returned to college, where she studied business administration and computer science. She says her fiance and his family were very good to her but eventually the relationship broke up and she moved to Dublin.

In Vietnam I’d qualified as an accountant but here I was working as a cleaner, and I was embarrassed

“I stayed with a friend for six months and found a job in a deli in Centra in Finglas. I didn’t have any benefits, so paying rent was tough and money was tight.” Nguyen went on to work as a cleaner, first in a south Dublin gym and later in Heuston train station. Ashamed by the turn her life had taken, Nguyen did not tell her family about what she was doing to pay the bills.

“In Vietnam I’d qualified as an accountant but here I was working as a cleaner, and I was embarrassed. Even my friends didn’t know. It was very difficult and I cried a lot. But I knew I couldn’t go back to Vietnam, that my parents would be embarrassed to see me return.”

She struggled to pay her rent and ended up homeless and sleeping on a friend’s floor before moving into a spare room in an ex-boyfriend’s house. “At first I didn’t want to live with him; I wanted to stand on my own two feet. But he felt sorry for me.”

Nguyen admits she was extremely unhappy and considered buying a ticket back to Vietnam but knew she’d struggle to find work in her home country. “I cried a lot. I was working so hard and nothing worked out. But if I went back to Vietnam, what could I do? I’m over 30, why would someone employ me when they could employ a new graduate? How would I survive? I had to keep going here.”

She eventually found a job as a waitress and saved up for two years before going back to college to study community care. After her studies, she worked as an administrator in a school before finding a job with a large social-media company where she worked in advertising.

“The first year was brilliant, there were so many facilities, but then they moved all the contract workers to another office and we were treated badly there. They paid well but it was so competitive. I was promoted to manager after six months but felt like I wasn’t recognised after that. I left last June because the job had become too stressful.”

During her early years in Dublin, Nguyen also applied to become a garda. Having become an Irish citizen in 2014, she “felt a responsibility to get a public service job and help people. I used to dream about becoming a cop and made it to the final round but failed on interview level. After the third time I gave up.”

I have a brilliant husband, a great job and the next stop is to save enough money to buy a place

In 2018, Nguyen visited her sister in the United States, where she lived in Utah with her husband. After more than a decade in Ireland, she had decided it was time to move on and start over where she would be closer to her sister. However, shortly before leaving, she met a man through an online dating site.

“I had decided to go to America and give up on life here. My room was ready in my sister’s house. But then I met Richie and fell in love. He’s the reason I stayed, I wanted to get to know him, and it was the best decision I ever made.”

The couple were married in 2019 and last year, a few months after leaving the tech company, Nguyen was hired to work in the Revenue office. “It feels like after so many years of trying I’ve finally made it and achieved something. I feel so proud. I’m the only Asian person in the whole unit. I’m also proud that I tried so hard. Trying and trying again, that’s how I got the job.”

‘In a good place’

Nguyen says it finally feels like her life is “in a good place”. “I have a brilliant husband, a great job and the next stop is to save enough money to buy a place.

“I’ve had lots of challenges in Ireland but that’s just part of my story, it’s all worked out in the end. I think someone who is determined to succeed can succeed here. You need to work hard to earn it, but I see my future and my career here now. I feel grateful that this country gave me the chance to live here and especially grateful to my Irish friends who have helped me through my hardships.”