My daughter is the only phone free child in her class

Give Up Yer Aul Screens: She’s the only phone-free child in class – on holidays, that’s fine 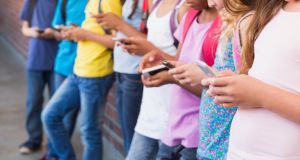 Why does not having a phone seem like we are making a choice to have our child singled out, or left out? Photograph: istock

“When are you getting your phone? Why don’t you have a phone yet?”

Summer holidays are a blessed relief in many ways. This year’s downtime up-side is that one daughter is no longer being grilled by her friends on why she is the only phone-free person in her class.

It’s nice, but naive to imagine not having a phone would garner you some positive attention, like being able to sneeze with your eyes open. Sadly, incredulity is a more common response. How can this person not have one of the most basic pieces of child equipment?

She tells us she understands the reasons she doesn’t have one. But I’m not convinced.

We remember the special disdain reserved for classmates whose families didn’t have TVs. And although nobody had to show they were part of the gang by lugging a 50kg cube of glass and plastic to school every day, they were easy to spot. They were the ones who would fall strangely silent when talk turned to the latest episode of Buck Rogers in the 25th Century or Scarecrow and Mrs King.

Someone might be bold enough to ask them why they hadn’t seen it and they would usually be quick enough to offer up their tellylless-ness for the enjoyment of all. Presumably a swift voluntary admission was less painful as it wouldn’t have taken too many questions about the latest adventures of Charlie’s Angels to expose a cover-up.

We discuss all those good reasons to hold off getting a phone. She nods sagely when we say once you have a phone, it’s really hard to control its use. But it gnaws away all the same. She doesn’t like having attention drawn to her in this way. And why does it seem like we are making a choice to have our child singled out, or left out? Does the new, inclusive Ireland not extend to those who are phone free?

Full disclosure here. We have not rooted all that evil technology out of our family life. There are devices aplenty in our home that the children are better able to operate than their parents.

Another daughter said she wouldn’t be asking for an iPhone for Christmas, but rather, as she was interested in music, an iPod Touch. Most of her class did likewise. It was a clever ploy and the beardy man went to great lengths to find her what was probably the last MP3 player in the country. There was relief all round when it was received with genuine delight.

In the car, in the bedroom, in the kitchen, she is to be found listening to music on headphones, through speakers, via voice-operated devices and even, quaintly, the old-fashioned radio.

Last year the eldest went to an Irish college that didn’t allow phones on the premises. At least one of her parents fretted a bit at the start because it was odd not to be able to talk to her. That passed quickly when the letters started coming, newsy and heartfelt. Afterwards, she claimed to have thoroughly enjoyed her brief release from phone use.

Back when she got her phone, somewhat embarrassingly, we drafted a phone use contract for her to sign. The irony of sourcing both the idea and some of the contract’s conditions from Google is not wasted on us. It’s full of sensible, righteous admonitions about keeping the device in the kitchen and not saying anything about someone on a phone you wouldn’t say to their face.

But the last of the 14 conditions is still my favourite. “Keep your eyes up. Watch the world. Wonder without googling. Listen to the birds. Talk to a stranger.”

Summer holidays have been a boon for device usage. That includes parents not being stuck to their screens when at home.

Cheese alert – we brought a book on holidays, Parlour Games for Modern Families, a compendium of simple, “old-fashioned” games and pastimes including the ones we all remember, charades, murder in the dark, old maid and rummy. I have vivid memories of my grandfather spending endless hours patiently teaching us card games such as snap, switch, 25 and poker.

For our family, holiday time means the children have to talk face to face, plan the day, swim and mess about in the water, listen to music, play ball games, read books, fight (occasionally violently) with their siblings, sulk over chores, squabble over card games and campaign for ice cream and henna tattoos. And these timeless pursuits we hope will make their memories.