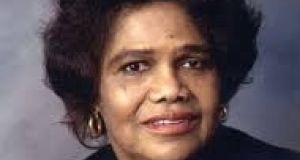 Edith Mae Irby: “Calling her a trailblazer underestimates her accomplishments. She chose to work in underserved areas, and still did so many other things”

Edith Mae Irby was about seven years old in the early 1930s when her older siblings contracted typhoid fever in their little house in Conway, Arkansas. Her brother Robert recovered, but her sister Juanita died.

Edith could never shake the awful sense that Juanita had received substandard care because her family was poor. She recalled that a doctor had visited Juanita just once during her illness, while spending more time tending to better-off typhoid patients living nearby.

At that young age Edith resolved to become a doctor who would find her reward in service, not wealth.

“I was going to particularly see those who did not have money and those who were less fortunate, who would get the kind of care that they needed,” she said as Dr Edith Irby Jones in a 2006 oral history interview at the University of Arkansas. “And I was going to do it as much as I could, and I was going to instil into others that they must do it too.”

By the time of her death on July 15th, 2019, in a Houston hospital, Jones, who was 91, had fulfilled her ambition. For 50 years, until she retired in 2013, she had devoted her career to treating lower-income patients in Houston’s Third Ward, making house calls and sometimes picking up patients in her van.

More than a local doctor, however, she also founded one hospital and co-owned another; did humanitarian work in Haiti, where a clinic was named for her; and became the first woman to lead a venerable medical association for black doctors.

Jones had stood out early as the first African-American student admitted to the University of Arkansas medical school in 1948. (It is now the University of Arkansas for Medical Sciences.) She is widely believed to have been the first black student enrolled in any medical school in the South – an educational milestone that preceded the supreme court’s decision in Brown v Board of Education by six years.

A photograph of Jones on her first day in medical school emphasises how isolated she had been. Published in Ebony magazine, it shows her alone in a corridor as white students mill about, some looking at her.

But she was optimistic and confident, believing that most white people were fair-minded.

“I hope to make a record that will reflect to the honour of my race,” she said in an interview with the Pittsburgh Courier, a black newspaper, in 1948, “and that will obviously show that we only want to be accorded the rights deserved by human beings and good American citizens.”

She played down the impact segregation had on her at the medical school – she could not use the white students’ dining, bathroom and residential facilities, but some fellow students studied and ate with her at her off-campus apartment.

“She didn’t harp on the difficulties,” her daughter, Myra Jones Romain, said in a phone interview. “She’d say to me, ‘if you cry every time someone said something that hurt your feelings you’d run out of tears’. ”

While attending school she joined three lawyers to form a group called the Freedom Four, which travelled to churches and homes around Arkansas, urging black people to get involved in the nascent civil rights movement.

“I was young and brave and fearless, and felt that I had a cause for which to be concerned,” she said in the oral history interview.

After graduating from medical school in 1952, she started a general practice in Hot Springs, Arkansas, then, in 1959, moved to Houston, where she became the first black woman to be named a resident at Baylor College of Medicine Affiliated Hospitals. She later opened a practice in Houston, and didn’t wait for all her patients to come to her.

“She’d pick people up, and when I learned to drive she’d say, ‘pick up so and so’, ” Romain said. “She was especially cognisant that the elderly were written off, not honoured and often isolated.”

Jones expanded her work as a staff doctor for several hospitals around Houston; founded Mercy Hospital, a small facility, with several other African-American doctors, and became a part-owner of Park Plaza Hospital.

In 1985, Jones became the first woman elected president of the National Medical Association, an organisation that has represented black physicians since 1895. During her year in office she and a group of doctors from the NMA treated patients and trained physicians in Haiti. She helped found a clinic named for her in Vaudreuil, in the northern part of the country.

“Calling her a trailblazer underestimates her accomplishments,” said Dr Niva Lubin-Johnson, the NMA’s current president. “She chose to work in underserved areas and still did so many other things.”

Edith Mae Irby was born on December 23th, 1927, in Mayflower, Arkansas. The family lived on a farm where Edith’s father, Robert, was a sharecropper; her mother, Mattie (Buice) Irby, was a domestic worker.

When Edith was about three years old a horse her father had been riding was stung by a bee and kicked him in the chest, causing fatal injuries. The family was forced off the land because her father had left a small unpaid debt to the owner.

After moving to Conway, Edith contracted rheumatic fever, which prevented her from attending school for a year and gave her a lifelong heart murmur. She recovered, but witnessed her mother’s anguish at watching Juanita die and Robert nearly succumb to typhoid fever.

“I remember my mother putting her head on the table, weeping unreservedly, particularly when my brother was so very sick,” Jones said in the oral history interview.

The family moved to Hot Springs, where Edith went to segregated schools. A high school teacher helped her get a scholarship to historically black Knoxville College in Tennessee, where she studied physics, biology and chemistry.

That set the stage for her breaking the colour barrier at the University of Arkansas medical school in 1948. (The university had opened its doors to a black law student the year before.)

“When I applied and they accepted me, everybody made such a big thing of it, but I wasn’t surprised at all,” she told the Texas Medical Center’s women’s history project in 2014. “Because not only did the University of Arkansas accept me, every medical school I applied to accepted me.”

While attending medical school she married James B Jones, an educator who became a dean at Texas Southern University. He died in 1989.

Before she graduated Jones gave a lecture to a sorority at Philander Smith College, in Little Rock, that moved one student, Joycelyn Elders, to become a doctor. Elders would go on to serve as the US surgeon general in the 1990s. “After that day,” Elders once said, “all I wanted to be was just like Dr Irby.”

In addition to her daughter, Jones is survived by her sons, Gary and Keith; seven grandchildren; and 10 great-grandchildren.

Romain said that she was concerned about her mother’s health when she was still practising into her mid-80s.

“She was starting to get forgetful, and I’d tell her she needed to retire,” Romain said. “She’d fight me about it, and I’d say, ‘you can do anything you want.’ But she said, ‘all I’ve ever wanted to do in my life is practise medicine’. ”