Irish music is a repetitive hum that dissolves the ego

Michael Harding: You can’t get angry at a music festival. It’s poison to the singing heart 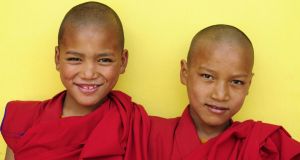 In late July men arrived to put cladding on the walls of the house. From out of a trailer they took stuff that looked like sheets of black aeroboard.

“It will take about a week,” the boss man said.

“I suppose it’s the least we can do to save wasting fuel,” I replied.

And as they began pinning aeroboard to the walls, I decided to let them at it and I threw a sleeping bag into the van and headed for Drumshanbo.

It’s only 5km down the hill but the Joe Mooney Summer School was in full swing, and I intended stationing the van in some car park, or behind the hotel, or at the cattle mart, and immersing myself in jigs and reels and old-fashioned singing for a few days.

That afternoon I met the musician Damian Thompson from Birmingham in the Lough Allen Hotel. He makes concert flutes. And he was sitting in the foyer with Peter Troake, a flute player from Devon. We drank glasses of cider listening to jigs roaring out from the lounge area behind us, where more than two dozen musicians were in session.

Irish music is as mesmerising as chanting in Tibetan monasteries. It’s a repetitive hum that dissolves the ego until only the tune remains. The musician becomes engaged in an act of surfing the notes, rather than controlling them.

And the counterpoint is always a song, when everyone stops to hear the singer render a tale of love or sorrow.

In popular culture the mythic singer is sometimes a one-man band on his endless journey to find a home. Stuck in railway stations and bus stops, he sinks into despair and sings of injustice. But in the Gaelic tradition there are more love songs. And more songs sung by women.

Drumshanbo on music week is always full of love songs, sung by old grandfathers that fly into Knock from places like Luton every July, or warrior mammies from Dublin suburbs, trailing two, four or six children along the high street, with fiddle cases strapped to every back.

On the second night of the festival I heard Mick Blake singing about Queen Victoria’s knickers. Apparently they went up for auction in Kent a few years ago and, according to Mick, her measurements horizontally and vertically were almost the same. He sang a sharp satire about the good lady licking seven plates of food clean; while the Irish of her kingdom starved to death. As Boris Johnson might have said, “She was a woman of considerable pluck.”

On the third afternoon, as I lingered in my van, a boy on a bike flew along the pavement and clipped my wing mirror and it fell to the ground. I wanted to get out and eat the head off him. But at a music festival you can’t do things like that because anger is poison to the singing heart.

Music folds itself around musicians, and they become docile. The same tunes spill out from different pubs. A simple jig follows them up and down the street. It’s like the bog around a stone. Eventually the stone is enfolded in moss and only the bog remains. The same goes for the ego in the face of a sustained onslaught of jigs and reels:

As Chris Miles, the iconic Scottish singer once said to me, “You begin to forget your name.”

Later in the week I heard Miles singing about a whale. She told me she was staying in a cottage up the mountain on the far side of Drumkeerin. She got it on Airbnb, but it took an hour to find, when she first arrived. So she tied a few balloons to various ditches along the lanes so she would know her way home in the dark later that night.

She was settling into the back lounge of Monica’s bar with a mug of tea, for a lunchtime session on the fourth day. The little room was full of musicians from all over the world, and I was happy knowing our house in the hills would be as cosy as a new computer wrapped in its box when the winter comes in.

And there was only one thing I missed. Despite the English having found yet another Master of Pluck to lead them over the cliffs and out to sea, in the person of Boris Johnson, I didn’t hear a single word uttered all week about Brexit or the merits of the English monarchy. Which, needless to say, was a great comfort.