Michael Harding: In time there might be nobody at all left anywhere in rural Ireland 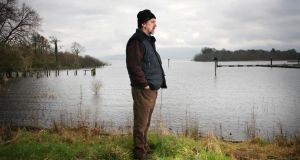 I can never forget that I’m living in a remote corner of the woods when someone sends me a parcel by courier. Letters are fine because the postman comes every day and even if the only address or identifying mark on the envelope is for a writer “somewhere in Arigna”, it seems to get to my door eventually.

But parcels are different. And couriers are always under pressure and the exact location of where I live has always been a matter of dispute. Although there’s no disputing the facts. I am on the Roscommon side of the border.

Even though Leitrim is what I view from the garden and the postal address is Lough Allen, which is in Leitrim, the undeniable truth is that my fields are Roscommon fields.

Last week my publisher sent me complimentary copies of my new book, to the postal address. And though I’m only a field or two outside the county boundary, it didn’t cut ice with the courier delivering to Leitrim when he discovered that he had a parcel for Roscommon. If his deliveries were for Leitrim then clearly no one would expect him to cross into a foreign county or to go up roads so remote that he might suddenly come around a corner and find himself in a different universe; a universe of Sitka trees and rushy fields.

Although, the trees around me are hardwood. I planted them myself, and last week I saw a squirrel balancing like a tightrope walker on the fence and stretching his entire body upwards to reach out his two paws and then grab the floating ash branch above him; he succeeded well and up he flew into the ash tree and disappeared.

I love squirrels and I love hardwood trees and indeed it’s not Sitka trees per se that bother me; it’s the isolation of elderly folk who are left among the forests, watching the dark barks and dense green phalanxes creeping insidiously up the slopes towards their houses, darkening the skies and obliterating their views.

There’s no such forest near me yet, but the planting has begun close by and I can see the saplings on nearby hills that will one day become patches of dark barren green.

Men and women who have lived all their lives in the same unchanging landscape and grown old with nature’s soft contours enfolding them like a mother, feel a deep trauma when the view is taken away. Who they are is wrapped up in a sense of belonging to the land that envelops them in every tender autumn fog or morning mist and it’s hard to express in words what they feel when that is taken away, except to say that the toll on their mental health is enormous. It’s as if the very world they belonged in had been erased.

When the courier found my house, and reminded me that I was living in Roscommon and that he had come out of his way with my parcel, I felt grateful. I thanked him for coming.

“My God!” he declared, looking at the lake, “you have an amazing view.”

I agreed, although I worry if it will always be there, or if a time may come when there are no more couriers driving up our road; not because we’re in Roscommon or Leitrim but because in time there might be nobody at all left anywhere in rural Ireland. And then it won’t matter which county I called home, because when it is covered in trees everything will have been forgotten.

This potential catastrophe rumbles beneath the feet of many impoverished farmers and ageing bachelors across the west, who cannot afford to do anything but sell their land to whomever decides to invest in trees.

It would be lovely to imagine a great surge in the population of Leitrim and Roscommon in the coming years, because rural Ireland is an exquisite place to live. And perhaps if we ever recover from Covid-19 more people will rediscover the joys of rural living.

Personally, I hope to stick it out as long as I can in this beautiful landscape with my wonderful neighbours, remote and isolated though we be. But I fear a day may come in the future when strangers wander up into the hills above Lough Allen and wonder why a cluster of hardwood trees would stand so defiantly against a brooding skyline of forest. And apart from the squirrels there will be nobody left to tell them who we were.

What will €900k buy you in Greystones, the US, Italy, France and Portugal?
9