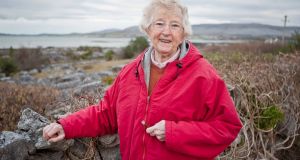 Sarah Poyntz contributed to the Guardian Country Diary for 23 years. Her interest in the natural world stemmed from her love of the outdoors, her playground growing up in New Ross. Photograph: Eamon Ward

When she was 14, Sarah Poyntz had a close brush with death in Campile, Co Wexford during the second World War. In August 1940, a German bomb dropped on businesses in the village killing three women, giving Ireland its first experience of wartime conflict. In her memoir, Sarah described how she had been visiting relatives in the village when she leaned against the remaining shell of the bomb which was still partially unexploded and was later made safe by the Army.

In the course of a long life, Sarah went on to become a celebrated champion of the Burren and a nature lover, contributing to the Guardian Country Diary for 23 years. Her interest in the natural world stemmed from her love of the outdoors, her playground growing up in New Ross.

In the early 1960s, her love of France led to spending an afternoon sharing a bottle of wine with Samuel Beckett in Paris

Born in 1926, Sarah was the daughter of Frank Poyntz, a solicitor with the firm Colfer & Sons, and Ellen Teresa (Nellie) Murphy who was from Wexford town. They had two other children, Jack and Kitty. During the war her mother, who was a stenographer in the same law firm as her husband, joined the Red Cross and was acknowledged as a no-nonsense organiser. “She was inclined,” Sarah later wrote, “to give orders in a memsahib manner which was not appreciated by the other ladies”. Her father played badminton, tennis and handball at the ball alley in Ballyann. He also partnered his wife in tennis and badminton mixed doubles and was a keen rower.

Her parents inculcated in their children a love of theatre, classical music and reading. Their mother was a storyteller while their father recited the poetry of Robbie Burns. Looking back at life in New Ross in the 1930s, Sarah recalled playing camogie and hopscotch, racing around on roller skates, exhilarating bike rides along the banks of the Barrow and enjoying picnics of egg and tomato sandwiches washed down with Cherry’s lemonade. It was a place, she said, that taught her about attitudes to birth, life and death.

In those days it was a busy port with ships bringing coal and timber. While walking along the quay one day she saw a large ship which her mother said reminded her of the Wexford schooners, two of which had been owned by Sarah’s grandfather, a Commodore who was drowned off the Arklow Banks while on a schooner in 1897.

In the middle decades of the 20th century New Ross was known for its characters, many of whom had nicknames which she later said enriched their lives and encouraged her as a child to be tolerant of people’s eccentricities. Some of the names included Badger Connors, Crackers Murphy, Fiddle-Face Doyle, Dead-Eyed Dick and the undertakers, Elm and Oak Fitzgerald.

The Burren became a place which held a magical appeal for her, not just because of the flora, but also for the quality of western light, the sea on her doorstep and the pure air. She documented the thrills of nature, frequently invoking literary quotations

Sarah was educated at Loreto Abbey, Gorey and UCD where she graduated with an arts degree becoming a teacher in England. She taught at Callington Grammar School, Cornwall, and was later appointed head of English at the Perse School for Girls in Cambridge before travelling in the United States and Europe. On one occasion, in the early 1960s, her love of France led to spending an afternoon sharing a bottle of wine with Samuel Beckett in Paris. She had written to the author asking if she could meet him and he sent a postcard arranging a rendezvous.

In 1986 Sarah decided to make her home in the Burren. She contacted the Guardian to ask if the paper would like contributions to its long-established Country Diary. The diary editor warned her not to hold out much hope since 300 people were on a waiting list to write a column. Undaunted, she began in 1987 and continued with a regular diary – the sole Irish contributor – until 2010.

The Burren became a place which held a magical appeal for her, not just because of the flora, but also for the quality of western light, the sea on her doorstep and the pure air. She documented the thrills of nature, frequently invoking literary quotations. Her personable style won her many admirers; a typical diary often started with a moment of weather drama: “Last night we had a mighty Atlantic storm”, or “Our house was wrapped in fog”.

Field glasses in hand, Sarah roamed the limestone hills along the shorefront at her house at Ballyconry near Ballyvaughan, delighting in seeing the first spring gentian. Many of her best ideas were found by walking the fields and pavement, stumbling across a dolmen, an ancient ringfort, or fulacht fiadh (cooking site). Her hobbies included building model boats and gardening.

In 2000 her Guardian diaries were collected in an anthology, A Burren Journal, dedicated to her partner Mary Ann Radzinowicz whose father had served as a general in the US army alongside Eisenhower in the second World War. Five years later she published Memory Emancipated, sketches from her early life in Wexford which included 44 poems by her. In 2010 – the year in which Sarah retired – she edited Burren Villages: Tales of History and Imagination, a collection of more than 30 essays about different aspects of the Burren which also contained some of Sarah’s own writing.