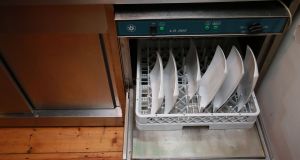 I don’t know anything about dishwashers. I never wanted to be a dishwasher. Maybe because they’re a recent invention or maybe because I’m just afraid of them. I stay as far away from them as possible.

I use various strategies of avoidance; for example, when people get up from the table and head to the kitchen with dirty plates, there’s always something else I can do, like putting away the bread, or returning the cold meats to the fridge, or making fresh coffee, or wiping the table and gathering up all the vessels of pepper and spice.

The wine glasses can be washed by hand because they don’t fit in the dishwasher, and then I put them carefully back in the appropriate press. But I just never touch the dishwasher.

The only thing I am good at is emptying it; a simple enough task, except that recently I found the bottom tray waterlogged and the dishes still dirty.

I mentioned it to the boss. She just said,“Don’t touch it, I’ll fix it later.”

And she did. When I returned it was humming quietly as usual.

But washing machines for clothes are an entirely different issue. I like them. My mother always had a washing machine. In fact she spent so much time standing over her washing machine that I presumed I had been born out of it’s belly, rather than from under a head of cabbage.

“Perhaps we should get someone to come and fix it,” I suggested.

Apparently the hosepipe can get blocked by the odd sock from time to time.

“That’s fascinating,” I said, and out of the blue I confessed that for a few days I too had felt like a washing machine with a blocked hosepipe. And it was becoming a problem.

When a woman at the checkout in SuperValu said that my mask was too tight and that it made me look constipated, I wanted to confess that she had hit the nail on the head and that I did indeed feel like a washing machine with a blocked hosepipe, but I thought it might be a bit too personal.

When I went to the doctor and told him about the difficulties in my gut, he suggested I should have a colonoscopy.

“What does that mean?” I wondered.

“Well” he said, “they’ll do to your rear end the same as any mechanic would do to a washing machine; they’ll examine the hosepipe.”

Not that they were going to find a sock in my guts. I may have eaten a few dodgy burgers in various fast food joints over the summer but surely I would have been capable of distinguishing a burger from a wet sock.

When I went to the hospital they made me take off my trousers and put on a pair of shorts with a hole at the back and I lay on a trolly until a surgeon was ready to “go in” as they say.

I didn’t feel anything because I had enough sedation to blur the edges of an elephant’s mind and even the screen above my head was hard to focus on for more than a few moments; although I did observe that the video of my innards was strangely similar to the cavernous swallow hole of an alien monster in a science fiction movie.

And yes they were looking for cancer. And no they didn’t find anything. But at my age there’s no telling what might arise all of a sudden and shatter my delusions of egoic grandeur and inviolability.

I wore my mask even when the doctor was announcing the good news to me afterwards, although he too was masked so we didn’t really get a good look at each other.

When I went home I stood in the kitchen staring at the dishwasher for so long that the boss asked me was I okay.

“You’re looking at that dishwasher with a tenderness that you normally reserve for encounters with the cat,” she said.

And I felt as if I was seeing the dishwasher for the first time.

“A dishwasher is a beautiful thing,” I declared, closing it’s lovely door. It’s so human.

A Dublin househunt: I found ‘the one’, then the survey results came in
Real news has value SUBSCRIBE