Julia O’Faolain obituary: Irish author who wrote ‘about what is inescapable’

Her themes include clerical intrigue, women’s role in society, power, faith and sexuality 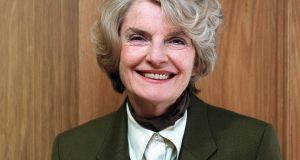 As a writer, Julia O’Faolain, who lived most of her adult live abroad, was not particularly well-known in Ireland. Photograph: Bryan O’Brien

The London-born Irish writer Julia O’Faolain has died following a long illness. O’Faolain, who lived most of her adult life abroad, wrote novels, short stories and a memoir,Trepassers (2013), which recounted her adult life and her years growing up the daughter of Irish writer, commentator and critic Seán Ó Faoláin and children’s author Eileen Gould.

Her novels include No Country for Young Men, which was nominated for the Booker Prize in 1980, Women in the Wall (1975), The Obedient Wife (1982) and The Judas Cloth (1992) which is set in 19th-century Italy. Her first collection of short stories, We Might See Sights and Other Stories, was published in 1968, followed by Man in the Cellar (1974), Melancholy Baby (1978) and Daughters of Passion (1982). And with her husband, the American-born Italian Renaissance historian Lauro Martines, she edited Not in God’s Image: Women in History from the Greeks to the Victorians (1973).

O’Faolain’s writings are suffused with themes of clerical intrigue, women’s role in society, power, faith and sexuality. She said once that she was more detached from her characters than her father was. “He was fond of his characters whereas I was more impatient of mine... The fact that he often forgave their foolishness showed that he was fond of Ireland itself, where he lived for the most of his life. I instead left it and found I was happier elsewhere.”

Writing about her work, the late poet and critic Eavan Boland wrote in The Irish Times that O’Faolain’s voice had a rare power that carries across themes and times. “Her stories are not about escape; they are about what is inescapable.”

Although born in England when her father was teaching at the Strawberry Hill College in London, O’Faolain grew up in Ireland. The family returned here when Julia was just one year old. They lived first in Killough House in Co Wicklow, where future taoiseach Garret FitzGerald was a playmate, artist Paul Henry a neighbour and Cork writer Frank O’Connor a regular visitor. The family then moved to Knockaderry House in Killiney, Co Dublin, where Seán Ó Faoláin published the literary journal The Bell from an outhouse at the bottom of the garden. Writers, poets and intellectuals such as Patrick Kavanagh, Brendan Behan and Conor Cruise O’Brien were regular visitors and often had to entertain Julia while waiting to speak with her father.

As well as maintaining a strong interest in politics, she attained a black belt in karate and attended karate classes until her early 70s

Julia O’Faolain didn’t begin school until she was eight as her mother, who was a teacher, had little time for nuns. Following her schooling, Julia completed an arts degree at University College Dublin and then did further studies at the Sapienza University of Rome and the Sorbonne in Paris. A formidable student and strikingly beautiful, she made a strong impression on those who met her.

In search of love, literature and freedom from 1950s Ireland, the young O’Faolain remained abroad working variously as a translator, language teacher, editor and writer in London. She made lifelong friends who speak highly of her generosity, loyalty and kindness. As well as maintaining a strong interest in politics throughout her life, she attained a black belt in karate and attended karate classes until her early 70s.

In her memoir, she recounts a number of her adult loves before she met and married Lauro Martines in Florence in 1957. The couple lived in that city for a year while Martines completed a travelling fellowship from Harvard University. They then moved to Portland, Oregon, where their son Lucien was born in 1959. While in the United States, Julia taught French at Reed College in Portland. The family returned to live in Florence from 1962-1966 while her husband carried out research. When he was offered a professorship at the University of California at Los Angeles in 1966 they moved back to the United States. However, not keen to live full-time in the States, they bought a house in Hampstead in 1970 and later in central London where Julia spent a good deal of time. From the 1990s onwards, Julia and Lauro spent more and more time in London and they visited Ireland more during these years. Lucian, a painter and picture repairer, lives in London.

I suppose I didn’t write enough. You mustn’t let too many years go by between books – and I did that

As a writer, O’Faolain was not particularly well-known in Ireland. Following the publication of her memoir in 2013, she was asked by Irish Times journalist Arminta Wallace if it bothered her that her name doesn’t often figure in lists of famous Irish writers, perhaps because she didn’t live here. O’Faolain replied, “Not only do I not live here but when my last book came out someone wrote an article naming me as a “forgotten writer”... which was not a cheerful read. It wasn’t in any way offensive but it wasn’t very comforting...I suppose I didn’t write enough. You mustn’t let too many years go by between books – and I did that.”

Her papers, which include manuscripts of her writing and a significant correspondence between O’Faolain and her father, were donated to UCD in 2018. Archivists expect they will be available to researchers from 2022 onwards.

Julia O’Faolain is survived by her husband, Lauro Martines, and their son, Lucien.