I ate my soup slowly, to prolong the conversation with the waitress 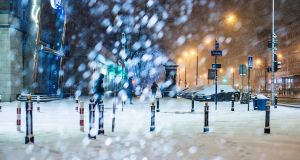 Warsaw: I loved being there, on the streets in freezing fog. Photograph: Getty

Mountains are lonely places at the best of times, but in lockdown the feeling of isolation is intense. The windmill blades rotate above me, their shadows sweeping the road and passing over my head with the indifference of someone walking across my grave.

One day last week I was marching up an untarred path when I heard a car horn. A Toyota Hilux crept up behind and I thought it was hooting at me. But it continued without slowing down, like a Taliban wagon on the road to Kabul, honking its way over every bump.

The driver had bags of animal feed in the back, and sheep moved across the bogland following the vehicle in a frenzy for their dinner.

I waved but there was no intimacy in the gesture. The lockdown has made us strangers to each other. Even a man in a white van servicing a windmill was more aloof than usual behind his steering wheel; saluting me with his forefinger and a wary eye.

And when a group of hunters appeared out of nowhere with a dozen dogs, they watched me passively and called their yelping pack from a distance. A hooded crow cawed his head off on a fence post, so forlorn that I wondered if my own unconscious shadow had thrown him into existence.

I used to write about Warsaw at this time of year and I loved being there, on the streets in freezing fog, wandering from one shopping centre to another, wearing a puffer jacket and a hood.

With snow on my boots beneath the tables of quiet restaurants, I ate my soup as slowly as possible, just to prolong the conversation with some waitress. That’s what I miss. Talking to strangers. The dizzy fuss of busy shops and the magic of crowded trams. It was all so normal.

Old women with little wheelie carts of cheap blouses smiled at me in TK Maxx, and young boys walked in their own dreams so deeply that they constantly bumped into revolving doors and then laughed it off. In optician shops I chatted about varifocals, in clothes shops I sifted through waistcoats, and all along the aisles of computer supermarkets I searched for assistants who spoke English.

Even the most surprising things were normal. I remember brushing against a swarm of schoolchildren from Israel in a Jewish graveyard one day, as they marvelled over old tombstones etched with their own names.

But in the lockdown I can only walk out the gate, and up into the barren hills

And I remember a woman standing at the glass wall of a hotel foyer one evening as snow began to fall outside; she smiled as she laughed into her phone and pushed her raven-black hair back from her eyes. Then suddenly she turned to me and asked if I knew where the Teatr Narodowy was.

We ended up having coffee and a great old chat, and it was all so natural.

I sat between women in scarves and fur hats in the churches, and I ordered carrot cake for fun one day in a restaurant because the waitress said it was on “special”.

I instantly regretted it, and she knew by my face.

“Carrot cake is not suitable in this weather,” I suggested.

I loved chatting with other diners, about pork and cabbage, cod bake with cheese or Russian pierogies. And I loved my lattes extra hot.

I may have drunk alone in my apartment watching Polish TV, but I carried every hangover all across the city on freezing ice, stopping to write wherever I went; in hotel foyers and coffeeshops, in railway stations and on the train to Lodz. Because everywhere around me there were people, young and old, men and women, millionaires and destitute beggars; all of them close enough to embrace.

But in the lockdown I can only walk out the gate, and up into the barren hills, feeling grateful for a few kilometres of solitary mountain and the song of a forlorn crow that punctuates my loneliness.

I listen to the whoosh of windmills and talk to the birds; I tell them that there is a place in Warsaw, near Old Town Market Square, serving the most delicious dumplings I have ever tasted; and that there is an old man who dines there every day. He comes for his lunch. And I imagine him still waiting for me to appear.

And only when I return, and sit with him again to savour the juice of those delicious dumplings, will I be sure that things have finally returned to normal.