Michael Harding: The dead bee and the woman who lost her son

January is a dangerous month for people inclined towards melancholy 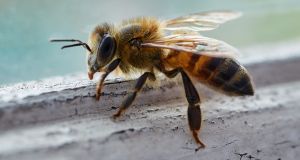 The bee on the floor evoked in me a strange sorrow as I sat at the computer, although I couldn’t focus on work. Photograph: iStock

A woman told me recently that her son died in New York from coronavirus. He had no funeral and nobody at the cremation and so she would never know the details of his final days.

“My heart is broken,” she said. “The pain of losing him is unbearable. Apparently he was in a bodybag, and the coffin was sealed. What an end to the child we loved so much.”

Although she was standing before me, I knew that her mind was elsewhere. Grief and bereavement are desolate places; locations in the darkest recesses of the soul, to where a person must travel sometimes. And I knew she was gone there.

“Say a prayer for me,” she added, and not wanting to get entangled in semantics I said, “Yes, of course I will.”

But the holiday came and I forgot about her. And after Christmas I returned to the solitude of my studio shed.

As a writer I have made a commodity of my life; my emotions are public and my persona is recognised on the street. But the real me remains hidden behind the curtains of my studio, where Tibetan bells tingle and incense soothes me, as I imagine various deities in the candlelight; Buddha, Christ and angels from the Koran or the Torah, all mixing together in a menagerie of divine bliss.

I love my studio, and sometimes I act out little rituals when no one else can see me, as I try to enter the ontological “here and now” that Thich Nhat Hanh advocates.

When I opened the door to begin the new year, I found a bee stretched on the floor. I hovered over him and gazed at his little legs, and I wondered if he had been stressed when he died, or did his consciousness dissolve into the night like the smoke of a quenched candle.

A Tibetan teacher once told me that bees experience death in the context of how they have experienced life, and in that sense they are the same as other beings. Death is always profound.

So the bee on the floor evoked in me a strange sorrow as I sat at the computer, although I couldn’t focus on work. I wanted to do something for the bee. I wasn’t going to read the entire Tibetan Book of the Dead to him, but I did sit with my back straight for a few moments, in the pose of a wise practitioner and allowed my body to fall into calm abiding.

And I hoped that my single-minded calm would be appropriate as a mark of farewell, not just to him, but to all sentient beings who had passed away during the Christmas holiday.

I looked out the window towards Cuilce mountain, knowing that my Tibetan teacher lives on the other side, and I whispered to him for help. Then I lifted up the bee on a piece of newspaper and opened the door of the stove and committed his little body to the flames, which devoured him with a tiny noise, like cellophane paper crumpling.

It was impossible to write anything after that, and I feared my impromptu funeral ritual might be a sign that I was once again on the verge of depression; especially since it was the beginning of January.

January is a dangerous month for people who are inclined towards melancholy, but what liberated me from depression 10 years ago was the simple practice of mindfulness.

The practice of clinging to my inward and outward breath as if it were a life raft, until I became confident enough to know that I could float in the world again. It’s not that mindfulness felt like prayer in the old fashioned sense, but I remember once describing it to a therapist as “dissolving into the present moment; and melting into the empty place where god used to be”.  I suppose it’s no wonder that the studio shed has become my refuge in recent years.

And while I was thus absorbed in calm abiding, the fragility of the bee’s life led me to the woman who lost her son. I recalled again her grief and devastation over the boy who was wrapped in a body bag and coffined so far away from her.

It’s strange how the universe works; the dead bee allowed me to enter a space where the woman was, and to sit with her for a few moments in that place of desolation. I suppose in a way that is a little like prayer.