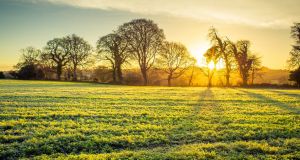 The cyclical nature of Christmas is reassuring – to know that life is a wheel of beginnings and endings. Photograph: iStock

I bought a heater before Christmas to take the chill out of the air in my studio; a dainty little fan-heater in pearl white plastic. It hummed softly in the corner and I could feel warm air moving around the room.

That was the last thing I did before diving into the glittering mirage of jingling bells on Christmas Eve, and I didn’t open my studio door again until the festival was finished.

The beloved woke early on St Stephen’s morning and her first words were: “Thank God it’s over.”

We say that every year. But the fuss and anxiety never changes. It comes and then it goes, and we wake up the morning afterwards, with a kind of relief.

The days before the new year are empty. Even the sky is painted in watercolours. And I often spend hours staring at sad flickering lights in the garden, and wonder not just where Christmas has gone but where my entire life went.

Myself and the beloved break the shells of our eggs in unison. We enjoy the physical harmony of animals who have spent a lifetime together.

“Where does it go?” I asked her. But she didn’t reply. Instead she just offered me another slice of toast.

Over the years Christmas rituals have woven us into a single fabric, and not even Covid-19 can undo it. We have observed the same rituals year after year. We have shared Christmas turkeys with Granny, and other loved ones long gone to eternal rest. We’ve shared it with couples who are now divorced, and of course with our children; before they grew up and went off to feed their own horses somewhere far away.

The cyclical nature of Christmas is reassuring. The repetition of things is comforting. To know that life is a wheel of beginnings and endings and that we return to the same old beginning every January. Christmas vanishes like smoke from a candle, or like snow from a rope, but the empty skies make January a refuge, as light stretches ever so delicately towards the shoots of a crocus, in the grass beneath the beeches.

I sit by the window as the afternoon fills up with sleeping cats, and I sense in the renewal of sunlight that I am forgiven once more and free to begin again. I realise that soon the sun will rise higher and the spring will arrive without my efforts or anxieties. I have nothing to worry about.

One Christmas when I was 10 I worried a lot because I broke the Virgin Mary statue by letting her fall on the mosaic floor of the cathedral as I was carrying her to the crib where she was supposed to hang out for the festival. The enormous, heavy plaster skittered along the marble for three long metres. Her hands were scratched and I worried that Father Eyebrows would wallop me across the same marble floor for being so careless.

If he asked me what happened I would be obliged to tell him that I was mesmerised by the legs of a Loreto student who was rehearsing her reading at the lectern as I carried the virgin. Her legs were visible to me just below the hem of her Loreto uniform and as she genuflected before the altar the wire of the microphone tripped me up.

No one seemed to notice the damaged fingers of the holy virgin as she knelt in frozen prayer for the 12 days of Christmas, gazing in porcelain equanimity at the straw manger. But I endured that Christmas season in terror, because back then the crib meant a lot to me and to desecrate it was like undoing the universe.

Then I grew up and like everyone else in Ireland I forgot about the infant and the angels and saw the dead plaster statues for what they really were.

There were moments in life when I feared I had completely quenched the flickering flame of faith; but it’s strange how in January the universe turns around and the empty sky seems so forgiving that almost everything is possible once again.

When I returned to work my studio was like an icebox. I pressed the power button on the computer and waited for the screen to light up. Then I watched the dainty white fan-heater in the corner blowing air around the room as I typed, and for no reason in particular it reminded me of an angel’s feather, just after the angel has gone.