Do other parents lie awake in the dark too, I wondered

Hilary Fannin: Or do they just look in the mirror and tell themselves to get on with it? 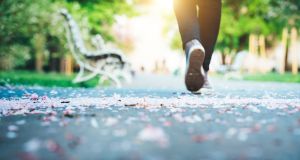 Hilary Fannin: I walked on past bare trees and silted-up water, on tracks littered with dry leaves and budding crocuses

Flat calm in the park this morning, no wind, just a jaundiced sky sliced up by a squadron of brent geese, a winged diamond over the treetops, spearheading for the estuary. Their shadow fell on the pond below, on ducks paddling around in the cold sun, their beaks tucked into their chests like the chins of snoozing aunts. A gang of seagulls turned up, corner boys kicking off over mildewed crusts, over the entrails of a crushed rat.

I walked on past bare trees and silted-up water, on tracks littered with dry leaves and budding crocuses. In the distance there was a different kind of foliage, flashes of lemony yellow and swathes of disco pink, appearing and disappearing behind the birch. Here were the park runners, the New Year enthusiasts, the resolution keepers, one foot in front of the other, pounding the silvery paths.

The park run was almost over. I sat on a bench and watched, with no little admiration, the straggling handful of men and women bringing up the rear, their cheeks puffed out under knitted hats. Sleeker runners were already stretching out their sinews under the oak trees, some offering noisy words of encouragement to their breathless brethren. “You’re almost there, don’t give up, you’re almost there.”

I watched a woman pick up a long, blotchy vegetable that looked like a turnip, pale and disappointed

I headed towards the coffee stand and the flower seller, towards the vendors selling organic meat and vegetables from stalls and vans. People queued up with their reusable shopping bags, rubbing rosemary sprigs between their fingers, examining the exotic mushrooms and the purple carrots, the bunches of leafy spinach. They pointed out cuts of lamb and beef to the organic butcher, taking the wrapped packages and tucking them into their breathable rucksacks. They perused the displays of dizzy cauliflowers and blushing tomatoes.

I watched a woman pick up a long, blotchy vegetable that looked like a turnip, pale and disappointed. The tuber reminded me of a bald headmaster, or a failed magician – now you see me, now you don’t.

I wanted to tap the shoppers on the shoulder and ask them about their lives. Who were they, these considerate, early-morning consumers, their bicycles parked in neat rows, their obedient dogs on generous leashes? Who were these prudent, privileged purchasers with their deep pockets and soft gloves? What kind of lives did they live, these diligent buyers who knew what to do with a kumquat? Did they lie awake in the dark too, I wondered. Did they look at their weary faces in the mirror on these dark mornings and tell themselves to pull up their hand-knitted socks and just get on with it?

In the playground, tiny children ran around in rubber boots, splashing in puddles of fallen leaves; they were lost in deep play, in generous, unpredictable, fantastical worlds. I watched their assiduous guardians and was grateful, despite the day ahead, not to be back there on the fresh shores of parenthood.

I wanted to ask her why she was standing on the wet clay, her young breasts flowering in that winter garden.

There is a tree near the playground pocked with tiny wooden doors, fairy doors, mysterious portals to another world. The rubber-booted toddlers open the doors for the winged sprites, and everyone is happy.

There is a herb garden in the park that’s quite often closed. I stopped to look through the wrought-iron gates at its perpendicular paths, its wilting beds. Recently the gates were open and I walked the gravel paths past loose blood-red roses. I accidentally disturbed a young woman there, posing in a see-through shirt for a photographer. She was standing in a fallow flower bed, her breasts milky white underneath the black shadow of her blouse. She stood among the fading lavender, crossed one knee over the other and leaned forward to pout into the camera. She and the photographer were speaking a language I didn’t understand. I wanted to ask her why she was standing on the wet clay, her young breasts flowering in that winter garden.

I turned away from the locked gates and walked along the river. A thin man stood in the shallow water holding three Afghan hounds on a leash. Haughtily impressive, the dogs appraised me through their smoky eyes: just another baggy woman, grateful for the air, grateful for the light, grateful for this still winter morning.

Later I take my son to the airport and join all those other parents saying goodbye where so recently we’d said hello. It’s nothing major; it’s not, as people tell me, as if he’s going to the other side of the world. Today is not a milestone, it’s just an ordinary old day, another day of quotidian beauty, already clouding over.