Yann Moix might be sexist – but is he just saying what other men are thinking? 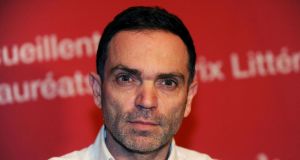 The 50-year-old French author Yann Moix has sparked a mixture of outrage and amusement over his claims that he could not love a 50-year-old woman.

In a Q&A with Marie Claire magazine, the prize-winning author said that it would be impossible to love a woman of his own age, and that he would be incapable of it.

On French radio, Moix said he would not apologise, adding that 'we are not responsible for our tastes, our penchants, our inclinations'

But it’s not all devastating news for women over 25: the dimunitive Moix, who has a face that might kindly be described as “characterful”, did say that when he is 60 he might be able to love a woman of 50, and that he might even now be capable of falling for a woman of 40.

He also told the magazine he prefers Asian women. “It’s perhaps sad and reductive for the women I go out with but the Asian type is sufficiently rich, large and infinite for me not to be ashamed.”

His comments have been met with howls of both outrage and hilarity in his native France and further afield. The French comedian, Marina Foïs, joked that she is about to turn 49, and so only has “one year and 14 days” left to sleep with Moix. The writer Joanne Harris picked up on his comment that women over 50 were invisible to him. “Yann Moix? Where? I don’t see him...,” she tweeted.

He might express it more crudely than most, but demographic trends indicate that Moix is not alone among men of his generation in preferring a younger partner

The French MP Olivia Grégoire called him “very classy” and said that “stupidity and vulgarity” have no age.

Speaking on French radio on Tuesday morning, Moix said he would not apologise, adding that “we are not responsible for our tastes, our penchants, our inclinations.”

Yann Moix? Where? I don't see him... https://t.co/EXiVIBEAiL

Of course the gendered ageism in Yann Moix comments are more widespread than many of us want to believe. Perceived sexual currency is why actresses are expected to retire happily from the screen in middle age. Male actors just get younger female co-stars. #ActingYourAgeCampaign

French author, 50, says women over 50 are too old to love
Yann Moix, a prize-winning novelist, says women of same age are ‘invisible’ to him

50+ Women ALL OVER THE GLOBE are devastated that this rather exhausted looking 50 yr old tiny man has written us all off. Jasus 😂 pic.twitter.com/LOGxD4CwSq

French cultural attitudes to age and ageing have come under the spotlight recently following the publication of a book entitled Why French Women Feel Young at 50 … and how you can too by Mylène Desclaux.

Desclaux’s recipe for remaining elusive about your age – and, presumably, more attractive to men of Moix’s disposition – is to never have a birthday party, and change your name if it dates you.

But ageist attitudes are not confined to France. And although he might express it more crudely than most, wider demographic trends indicate that Moix is not alone among men of his generation in preferring a younger partner.

In his column for this newspaper, David McWilliams pointed to interesting demographic trends in relationships that have so far gone largely undocumented. Although a greater proportion of the Irish population is single than ever before – and that there are more single males in their 30s and early 40s in Ireland than there are single females – they are not typically hooking up with one another.

“If there are more single men in this age group … there should be loads of men for single women in their later 30s or early 40s. So why am I asked to matchmake? Shouldn’t these figures cancel each other out? They don’t, and the reason there is an absence of eligible men for the Pope’s Children women is that the men are more likely to skip a few years and choose younger women.”

Yann Moix might be a reductive, sexist boor, but is it possible that he’s just saying what many other unattached men of his age are thinking?

For an explanation of what’s going on, McWilliams points to trends in Sweden, where “households headed exclusively by single women begin to rise rapidly after women reach 35”, increasing as women enter their 40s and 50s. “Yet in Sweden the number of households headed by single men is falling not rising.”

The reason for this, the data shows, is that “men of those divorces hook up very quickly again, and they do so not with women of their own age, who tend to remain single, but with younger women.”

A similar trend is beginning to be seen in Ireland, McWilliams writes. “A typical single man in his 40s in Ireland is dating women who are younger and in some cases much younger.”

Internationally, too, studies have shown that men are significantly more likely to remarry after a relationship breaks down than women are. A 2014 study in the US by Pew found that two in three newly eligible men typically go on to remarry, compared to roughly half of women.

So Yann Moix might be a reductive, sexist boor, but is it possible that he’s just saying what many other unattached men of his age are thinking?

It’s possible that women in their late 30s, 40s, and 50s are simply getting more selective, and prefer to stay single than settle

On the face of it, the idea that men are overlooking women their own age to skip down a whole generation is a slightly depressing prospect (although older women might well regard missing out on the opportunity to date someone primarily obsessed with the date on their partner’s birth cert as a lucky escape). As usual, though, when it comes to relationships, the picture is more complex than it first appears.

The 2014 Pew study found that 29 per cent of previously married men say they definitely want to remarry, while 30 per cent do not, and the remainder are unsure. But amongst women, just 15 per cent of those previously married are keen to take the plunge again, and over half definitely do not want to remarry. So it’s possible that women in their late 30s, 40s, and 50s are simply getting more selective, and prefer to stay single than settle.

Moix, a director and TV talkshow host who has won several prestigious literary prizes, went on in his radio interview to make at least one point that is hard to dispute: “It takes nothing away from a woman of 50 years that I don’t want to sleep with her.”

In a rare display of self-awareness, he also admitted that it was possible a woman over 50 might not want to sleep with him either.

Coronavirus: Where should you sit on a plane to avoid infection?
9

Soreness is good, scales are pointless: The 10 biggest myths in fitness
10

Who are the Irish influencers driving London hospitality?
Real news has value SUBSCRIBE