‘Are you the man who had the heart attack? How could you be so stupid?’

Michael Harding: ‘Indigestion,’ she scoffed, ‘between your shoulder blades!’ 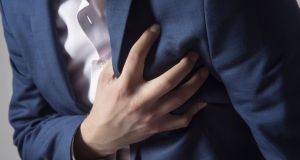 ‘Tell me,’ she said, ‘how could you be so stupid? Did you not get a pain in your chest as a warning?’ Photograph: istock

The butcher’s shop is an odd place to find an apple tart, but recently my butcher began stocking high-end pastries, tarts and jars of chutney. He says he’s competing with the country market, and it draws people into the shop.

“Some of them could even be vegans,” he whispered, “but when I get them inside this door, they’re half-way to a pork chop.”

I picked out an apple tart, and was surveying the steaks when a woman parked a white Audi on the street just outside the door.

“You’d better watch yourself if this one comes in here,” the butcher said. “She’d want to know what you had for breakfast.”

A 191 reg plate adorned the nose of her Audi which she secured with a stylish bleep before coming inside.

Her eye examined the red meats stretched in elegant strips and dainty slices, inside the glass display.

Then she noticed me.

“Are you the man who had the heart attack?” she inquired.

“Yes,” I admitted, smiling as if having a heart attack was something to be proud of.

“But you look normal,” she said, eyeballing me.

“Why wouldn’t he?” the butcher interjected, though her eyes were still fastened on me.

“Tell me,” she said, “how could you be so stupid? Did you not get a pain in your chest as a warning?”

“Yes,” I admitted, “but I thought it was indigestion.”

“You should have gone to the hospital the moment you had the pain,” she scolded.

“Indigestion,” she scoffed, “between your shoulder blades!”

Then she wheeled around to address the butcher.

“Give me the usual,” she declared.

How do you find the Audi?” I wondered.

“It was my husband insisted on getting it,” she said. “I thought he was going to sleep with it. He would go out to the driveway at night, just to admire it. But now he spends the afternoons staring at all the 191 plates. And he’s not a happy bunny.”

The butcher handed me my steak and tart, for which I paid, and left. And that’s how I ended up with an apple tart on the back seat of the car.

So when I couldn’t find a fresh bun in the petrol station half an hour later, I remembered what was in the car. I bought a coffee, went out for the tart, and then asked the lady at the deli counter for a knife.

“What do you want the knife for?” she wondered.

“To cut my apple tart,” I explained, pointing towards my seat at the window.

There was a large man in a ragged jumper at a nearby table and he was keeping a close eye on both me, the tart, and the other customers, so I guessed he was the owner of the premises.

“You’re hungry,” he declared, when he caught my eye, which was a coded way of saying, why are you sitting in my shop eating a tart you bought somewhere else?

I lifted the tart with both hands and displayed it under his nose. As some gunmen along the Border used to say years ago, “the best place to hide is under the lamp”.

“Will you have a slice?”

“Kilcogy; to be precise,” I said. Because the information was on the label.

“I know,” said I, “but if you took one bite of this, you’d be stacking the shelves with them next week.”

“You’d be a good sales rep,” he said smiling, “if you weren’t working for The Irish Times. But wait till I get myself a coffee.”

And he was gone for a moment, and then returned with his paper cup of coffee, and sat beside me at the window as we both savoured the sweetness of the Kilcogy tart.

But then it happened. The exquisite intimacy of rural life opened up before me yet again, as a white Audi floated into one of the parking bays just outside the window.

“What do you drive?” he wondered.

“A Skoda,” I said but my eyeballs couldn’t believe what was now outside the window. It was herself in the 191 Audi. And she was waving at us.

“Is that your wife?” I wondered.

“And is that your Audi?”

“Aye,” he said, with an air of despondency.

“Is it petrol?” I wondered.

Are your kids are picky eaters? Try this soup loaded with nutrients