Michael Harding: Notre Dame and the farmer who died by the light of the moon

That cathedral felt like it belonged not to Paris but Europe, and the fire seemed to awaken something across the continent 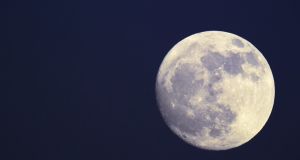 I know it is the same moon everywhere and always; shining now through the broken windows of Notre Dame. Photograph: iStock

I heard a story recently about a farmer’s death. A bachelor who died by moonlight. A man who worked so hard that he could be heard on summer nights in good weather, driving his tractor up and down the road, with a buck rake on the back, carrying hay bales from a big field to the hay shed in his back yard.

As he was reversing to lift the final bale, he drove close to the ditch, and the wheel got caught in a rut and the machine tipped over and pinned his lower body to the ground. He may have shouted for help but nobody heard him. So he died by the light of the moon. And years later, his brother told me the story, with tears in his eyes.

It’s important to remember the dead. People often stand around outside a funeral home or in the back yard of a farmhouse during a wake, talking about some sycamore the deceased planted years earlier, or how she made bread every day, or where she went on her bicycle for eggs in the old days. It’s not really God that matters to people in the end. It’s the stories of remembrance that count.

Dawkins and the rest of them are probably right about the goddy-woddy stuff. Even I have outgrown my childhood faith. But the trouble is that I don’t live in the same world as Dawkins. He enjoys the freedom of a modern sophisticated culture, but I still live in medieval Ireland. So even though I’ve lost any religious conviction I once had, I still love liturgies, ritual, holy songs and the empty sanctuary when the service is over.

I only go to church nowadays for weddings and funerals but I love to sit in the pew when all the songs have been sung and the crowd has gone off to the hotel.

Recently I was in the Church of Ireland Cathedral near Lough Oughter, not far from Cavan town.

I was looking for the Bible that Bishop Bedell translated into Irish in the early 17th century. I found it on a table in the sanctuary. And I stood in awe before the book, and read aloud the first line.

I remember seeing the same cathedral on YouTube a few years ago; a video shot in winter from a drone. The roof was white with snow and the building stood majestic on a hill surrounded by bare winter trees, like something out of a Russian fable. I grew up less than three miles from that cathedral’s 12th century door and I attended a few carol services at Christmas, when I was a boy. But after my recent trip I was amazed at how much the building mattered to me as a sacred space.

The following evening I turned on the television and saw Notre Dame on fire. And all of a sudden that cathedral felt like it belonged not to Paris but Europe, and the fire seemed to awaken something across the continent. Almost everybody I talked to during the week, had a story about the cathedral and how the fire was a kind of wound.

Even I had some anecdotes about it. Because I once said Mass on a side altar, with Japanese tourists standing behind me, watching me through the bars of a wrought iron gate as if I were an exotic bird in a cage. When I raised the chalice in the air I could feel a hundred camera lenses behind me, clicking in frantic efforts to grasp the moment.

The size of the cathedral and particularly its height had the effect of making it feel like an outdoor space. The vault was so far above that it felt like part of heaven, especially on evenings when moonlight fell in shafts across the sanctuary.

But perhaps that was only because I love the moon, and love to see moonlight, whether falling through the stained glass windows of a sacred building, or shimmering on the surface of Lough Allen.

And I know it is the same moon everywhere and always; shining now through the broken windows of Notre Dame, or illuminating the woodwork in the cathedral in Cavan, as the old Bible is put back in its glass case and the sexton locks the doors leaving the interior empty and silent. The same moon remembered in the story of a farmer’s death, long after the farmer himself has been forgotten.