UCD professor and scholar compiled many editions of Hiberno-English dictionary 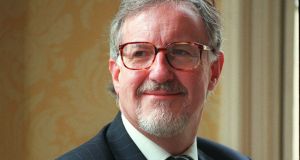 Irish lexicographer and former professor of English at University College Dublin, Prof Terence (Terry) Dolan died recently following a long illness. A distinguished academic who was once a scholar at Queen’s College, Oxford, Dolan was also a former director of the international James Joyce Summer School in Dublin.

He was, however, best-known as the author of the Dictionary of Hiberno-English (Gill & MacMillan 1998, 1999, 2004 and 2013) a comprehensive scholarly account of the English language as it is spoken in Ireland. That publication was described by poet and critic Tom Paulin as both “a quarry and a cairn” and “a living resource which connects us with the spoken language and the printed language”. Dolan himself described Hibero-English as a macaronic dialect, a mixture of Irish and English, sometimes in the same word (eg girleen or maneen).

In various editions of the Dictionary of Hiberno-English, Dolan explained words as diverse as Bertie Speak [a reference to how former taoiseach Bertie Ahern spoke], yokes, eejits, gurriers, smithereens and dig-outs. In the 2013 edition, Dolan proclaimed that the “Dort” accent was on its way out with the Celtic Tiger. That same year, he presented a series on RTÉ Radio One, Talking Proper: The English of the Irish. And he always carried a notebook in which he wrote down new words and phrases he heard on his travels

Dolan also shared his vast knowledge on the etymology of words in his weekly radio slot on Newstalk’s Sean Moncrieff show. Known affectionately as the “word guy”, he would spontaneously explain the origins of words texted into the show. And in a recent tribute to Dolan, Moncrieff described him as a complete gentleman who had a well-lived life.

Terence Dolan was born in London, the elder of two sons to Irish parents, both of whom were from Co Cavan. Although he had a humble upbringing, his dad nicknamed him “the professor” as a young child. He attended Gunnersbury Grammar School in northwest London.

Dolan began his academic studies at the University of Sheffield before moving to Oxford University. While at Oxford, he was a Hastings Senior Scholar of Queen’s College. He moved to work in University College Dublin in 1970 and completed his PhD in 1983.

He was the National Endowment for the Humanities Distinguished Visiting Professor of the Humanities, University of Richmond, Virginia in 1986 and 1992. And, he lectured in London, New York and Paris.

At UCD, Dolan was professor of Old and Middle English in the school of English and drama. The works of Chaucer were a particular favourite and he contributed to the medieval mystery book, Who Murdered Chaucer? written by his friend the actor Terry Jones. Well-liked by his students, he delivered his lectures with wit, wisdom and warmth. He also co-ordinated research at UCD and was the director of the Hiberno-English archive website. “He sparkled and crackled with energy; he was an amazing speaker and orator,” his friend and colleague of more than 40 years, UCD Prof Alan Fletcher told The Irish Times.

Dolan was also a regular speaker at Literary Society meetings and transition-year English evenings at St Columba’s College, Rathfarnham, for over 35 years. A tribute to him on the school’s website said “Terry’s particular talent was a humorous lightness of touch, in discussing language and literature that belied the deep scholarship on which that knowledge rested. No pupil could catch him out (though at times he stretched things: he would look you in the eye and insist after some rather unlikely explanation “It’s true”, while a twinkle in his eye suggested otherwise). He also particularly enjoyed talking about ‘bad’ language, his Queen’s College Oxford voice articulating the origins of the ‘f’ word to startled pupils.”

In February 2008, Dolan had a severe stroke and spent most of that year in Tallaght hospital recovering. He spoke about the impacts of his stroke in 2010 on RTÉ Radio One with Marian Finucane and became an advocate for better stroke awareness, receiving an Irish Heart Foundation award for this work.

His brother James said his brother touched so many lives with his brilliant knowledge and charismatic presence and was always positive no matter what. “He would light up a room wherever he went,” he said.

Prof Terry Dolan is survived by his brother, James; his sister-in-law, Faith; his nephew, Luke; his close friend, Mary Reilly; and former students and colleagues at UCD.