Michael Harding: I decided to have another go at finding a camper van 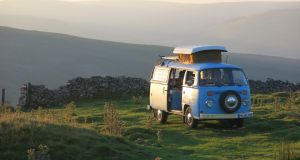 Michael Harding acquired a camper van and found a spot for shelter amid the sand dunes. “I squinted out through the slit in the blinds and saw blue lights flashing on the roof of a squad car.” Photo: istock

I’m glad the mating season for small birds is almost over. I was late for coronary rehab last week because I was wiping bird poo off the wing mirrors of the van.

Apparently young feathered bulls thought they had competition from their own reflections and they went crazy banging their beaks against the mirrors, which clearly gave them the runs, because every morning the van door was splattered with bird shite.

I go twice a week to the rehab group. It’s a way of developing an exercise routine. Myself and a few other crocks in tracksuit bottoms, T shirts and running shoes spend 50 minutes on rowing, walking, cycling and weight lifting machines.

I suppose the next step is to join a gym although I’m nervous of that option. Whenever I’m in a leisure centre, I often admire young men with magnificent bodies grunting underneath the weight of barbells, but being excessively masculine was never high on my own agenda. I always preferred the spiritual path; and a vigorous healthy life of sport and gymnastic exercise doesn’t quite induce spiritual ecstasy.

It’s no accident that many young boy saints were watery wimps who suffered from TB and many lady saints spent much of their girlhood in bed, suffering from disabilities and mental torments induced by the pressure of living under patriarchs both familial and ecclesiastical.

But the urgent need for exercise after my little coronary event was the reason I decided to have another go at finding a camper van. Especially since I live near Donegal with all those mountains just waiting for me to find my inner mountain goat.

I was in Letterkenny one day when a stranger spoke to me in a restaurant.

“I heard you were looking to buy a camper van,” he said.

“Well there’s one for sale just down the road,” he said. “It’s on Done Deal, and it’s an old machine but the price might suit you.”

I googled Done Deal, and then drove a few miles down the road to view the vehicle, and without further ado I ended up with a little black van.

So now I have my own motorhome, although it’s about as big as a queen size bed on wheels, with a low roof that gets in under all the height restriction barriers local authorities erect to dissuade Travellers from travelling.

I am able to park near forests, cliffs and remote beaches without being noticed. And though the vehicle is effectively a bed on wheels, or as the General says, a hearse for twin coffins, it doesn’t attract attention from the outside.

One evening I parked on a cliff. But a fierce wind rose up and I was nervous because the van began rocking like a pram.

I put on my clothes, and drove to the nearest shelter, which was down in the sand dunes. But unfortunately I didn’t notice a sign declaring that parking near the dunes was prohibited.

I was lying in the bed an hour later with blacked out windows when I heard a car crawling up the beach. Then the interior of the van lit up as the driver turned his headlamps full onto my vehicle. I squinted out through the slit in the blinds and saw blue lights flashing on the roof of a squad car.

No one but God could see me in that magnificent wilderness

I had already knocked back a bottle of wine trying to get asleep, which meant I couldn’t drive away if I was indeed parked illegally. And I had visions of being taken to the local Garda station in my pyjamas while the van was impounded.

But the Gardaí may have decided I was harmless enough or else they were just on their midnight break, and wanted to eat their curried chips listening to the sound of the ocean, because after 20 minutes with their lights dimmed they revved up and drove away into the night.

I slept soundly, woke at dawn and walked the beach reflecting on how splendid it was to be alone; because no one but God could see me in that magnificent wilderness.

Although when I was paying for fuel at a Gala station later, a guard just happened to arrive in the shop for a coffee.

“Good morning officer,” I said, cheerfully as I went out the door.

“Good morning,” he replied. And just when I thought I had escaped, he called after me.

“Is that your van out there?” he asked, pointing at my little black camper. And indeed I had to confess that it was.