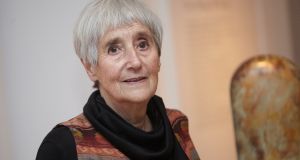 Sonja Landweer at the National Craft Gallery in Kilkenny in 2012. Photograph: Pat Moore

The internationally acclaimed Dutch artist and craftmaker, Sonja Landweer, who was a pivotal member of the group of artists who revitalised craft and design in Ireland in the 1960s has died.

Although trained as a ceramicist, Landweer drew, painted, made prints, jewellery, bronze works and pottery. Her lifelong engagement with nature informed much of her work from her innovative body sculpture pieces to her patinated bronze forms to her wonderful circular vessels. Her work features in several public collections including the Frans Hals Museum, Haarlem and the Princessehof Ceramics Museum in Leeuwarden, both in the Netherlands, the Hildesheim Städtisches Museum in Germany, the Museum of Decorative Arts in Copenhagen, Denmark and in the Ulster Museum, Belfast.

Design Yard in Dublin’s Temple Bar (2002), the National Craft Gallery in Kilkenny (2004) and Visual Carlow (2011) hosted retrospective exhibitions of her work in recent years. She exhibited in numerous solo and group shows in Ireland, throughout Europe and the United States and was latterly represented by the Peppercanister Gallery in Dublin.

Sonja Landweer was born in Amsterdam, the eldest child of three to German artist and teacher, Erna Benter-Landweer and Dutch registrar of births and deaths, Pieter Landweer. Her father was killed by the Nazis while fighting in the Dutch resistance to second World War when she was just 12. In the early 1950s, Landweer studied ceramics at the Amsterdam School of Industrial Design (now the Rietveld Academie) after which she was apprenticed to the Zaalberg Pottery studios.

She set up her own art studio in 1954 and was one of six young ceramicists who exhibited their work at the Museum Boijmans Van Beuningen in Rotterdam – a show that signalled the rebirth of artisan ceramics in the Netherlands. With her superb technical skills and artistic talent, she pushed the boundaries of ceramics way beyond their traditional functional status.

In 1965, Landweer was invited to Ireland as one of an international group of artisans which included the German silversmith Rudolf Heltzel to revitalise Irish craft and design. She came to teach ceramics as artist in residence at the newly founded Kilkenny Design Workshops. The David Henriks Gallery in Dublin was the first gallery in which her work was exhibited in Ireland. Before that, she had already fallen in love with Ireland, following a winter visit to the Burren in 1959. She had also met and fallen in love with the English artist, Barrie Cooke, who had settled in Ireland in the mid-1950s.

Cooke and Landweer lived first in the Island, Thomastown (now Grennan Mill Craft School) and then in Jerpoint House. Their daughter Aoine was born in 1966. Co-founders of Kilkenny Arts Week, Landweer and Cooke hosted many writers, artists and poets and their close friends included Seamus and Marie Heaney. During his acceptance speech for the Nobel Literature Prize in 1995, Heaney read To a Dutch Potter in Ireland, a poem inspired by his friendship with Landweer.

Over the years, Landweer developed a bold contemporary form of art using beads, slate, wood, paper, feathers, bone, leather, plastic, ceramic and other fibres. She was instrumental in changing perceptions of what can be worn as personal adornment without using precious metals. When reviewing the retrospective Landweer show at Visual Carlow, Irish Times art critic Aidan Dunne said “she is not afraid to harness wild, almost uncontrollable processes and materials in pursuit of elegantly poised forms and surfaces”. Dunne added that that her entire body of work displayed an “underlying toughness of vision, an absolute unwillingness to settle for prettiness”.

Landweer tutored at various art colleges in Ireland and the UK between 1972 and 1996, inspiring a generation of younger artists. She was awarded the prestigious prix artistique at the Biennale Internationale de Ceramique d’Art at Vallauris, France in 1974. And she was given the 1992 honorary award at the National College of Art and Design in Dublin. In 1981, she became a member of Aosdana, the Irish association of artists.

In the 1980s, she suffered from an over-active thyroid condition which saw her go on an experimental trail in the UK for almost two years. Upon her return to Kilkenny, Cooke and Landweer separated but continued to be firm friends and supporters of each other’s creative work until Cooke’s death in 2014. Jerpoint House was subsequently sold to the Camphill Community but Landweer continues to live and work in a lodge on the grounds of the house.

In the 1990s, Landweer developed unusual techniques of knotted monofilament, inspired by a winter visit to Crete where she was drawn to prickly skeletal structures of plant remains. Her most recent work incorporated large sequins and semi-precious stones with gold crimped nylon into jewellery and body sculpture. She continued to work right up to her death and was one of the artists featured in the exhibition In the Age of Conscious Makers at the NCAD Gallery from November 2019 to January 2020.

Sonja Landweer is survived by her daughter, Aoine Landweer-Cooke and her brother Peter. Her sister, Christa pre-deceased her.

7 tips to improve your sprinting
8

Auctions and fairs: a guide to this week’s events
10

What do you do if you split up at the start of your pregnancy?
Real news has value SUBSCRIBE