Married and gay in Northern Ireland: A ‘strange limbo’ 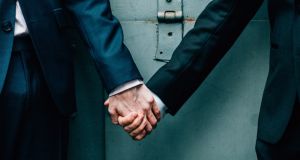 Petitioner X and his husband decided to remain anonymous for personal and professional reasons. “We didn’t want to draw attention to ourselves.” Photograph: Getty Images

When Taoiseach Leo Varadkar visited Belfast Pride earlier this month, he said that the reality of marriage equality in Northern Ireland was “only a matter of time”.

But time is a malleable thing in a place fraught with political inaction and a strong opposition to marriage rights for same-sex couples. Northern Ireland is the last jurisdiction in the UK where same-sex couples can’t get married, a fact laid even more bare when same-sex marriage is possible just across the border in the Republic.

On Thursday, the movement for marriage equality in Northern Ireland faced a significant setback when Mr Justice O’Hara ruled against three couples in two cases attempting to progress same-sex marriage through the courts.

One case was taken by two couples in civil partnerships, Gráinne Close and Shannon Sickles, and Chris and Henry Flanagan-Kane, claiming that their rights were being breached by Northern Ireland’s prohibition of same-sex marriage, in contravention of the entitlement to marriage and family life under the European Convention on Human Rights.

They were worried about the impact potential negative attention would have

The other case, known as Petition X, is about the recognition of an existing marriage. The male couple, who were granted anonymity in the case, married in England in 2014, yet their marriage can only be classified as a civil partnership in Northern Ireland. Recognition of their marriage could have created an argument for recognition of all same-sex marriages in the North, and therefore undermine the ban on same-sex marriages taking place in Northern Ireland.

‘We opened the door slowly ’

Petitioner X and his husband decided to remain anonymous for personal and professional reasons, as one runs a business in Belfast, and they were worried about the impact potential negative attention would have.

“We didn’t want to draw attention to ourselves,” X said on Wednesday evening ahead of the judgment. “We already knew people were doing it in a more public fashion, and this would be complementary to that.

“It was a two-way strategy, where instead of just asking for everybody’s marriage to be recognised, that if we opened the door slowly – if we got married in London and had a marriage certificate, if we could make our marriage recognised here – the next argument would be: why can’t people in Northern Ireland get married? None of these cases are in competition, we’re all after the same thing. A win for anybody is a win for all of us.”

But those “wins” didn’t materialise.

Yet movement beyond civil partnership has been slow. There have been five attempts to pass marriage equality in Northern Ireland through the Assembly. An attempt in November 2015 was supported by a majority of representatives – 53 in favour and 51 against – but vetoed by the DUP using a “petition of concern” mechanism.

“Their frustration is increased by the fact that the Assembly has voted by a majority in favour of same-sex marriage, but by reason of special voting arrangements which reflect the troubled past of this State, that majority has not been sufficient to give the vote effect in law.”

It’s clear now that the route to marriage equality is through the Assembly or through appealing both judgments. “The law on marriage is a matter which is a transferred matter under the Northern Ireland Act 1998. This means that it lies within the competence of the Northern Irish executive and the Northern Irish Assembly,” the judgment on Petition X read.

It’s of little comfort to same-sex couples and campaigners that the issue is being kicked back to the Assembly, which is not currently functioning.

It’s difficult to imagine the DUP – vocal opponents of LGBT rights – supporting marriage equality. Yet they run the risk of alienating young Protestant voters, who feel at odds with the party’s socially conservative stance. In a post-election survey this year, 63 per cent of Protestant voters under 40 declared themselves in favour of same-sex marriage, and 72 per cent of Protestant non-voters under 40 were in favour.

Ciaran Moynagh, the solicitor in Petition X, was “quietly confident” during the week. Shortly after the judgment, he said the judgment had “got everyone by surprise”.

Moynagh believes that in asking for recognition of an existing marriage, they had pitched a decent case. He interprets the judgment as the judge saying same-sex marriage is social policy, and that it’s up to government, not the courts, to make that.

“We are critical of that viewpoint because we don’t have a functioning Assembly,” Moynagh says, “we have bias in the Assembly, and we don’t have direct rule.”

After the judgment, the couple in Petition X left Belfast to spend some time with friends elsewhere in Northern Ireland. Petitioner X said it was the first time he had felt actively discriminated against

“I can’t help but feel personally put down by this. It’s us. It’s our marriage that is being judged for its worthiness or unworthiness by this particular judge. If you were to allow this to take over, we’d be angry all the time and you wouldn’t get anything done.”

Before the judgment, he spoke about his frustrations. “I personally get very frustrated. I get frustrated at the fact that the only reason we need to do this is because there are people in power who view people in the LGBTQ+ community as lesser.

If and when the Assembly reconvenes, the DUP will remain the biggest roadblock to marriage equality

“They can dress that up in different language, they can get offended by being called homophobes, but if you are being pushed by a religious rather than a political view of equality, these people are able to do this, to hold us back, and yet there is no fallout for them.

‘We’re in a strange limbo’

After the judgment, that frustration was compounded. “We’re in a strange limbo period. We don’t have a devolved government that’s working – even though they’re still drawing their salaries – but we haven’t fallen back into a situation where we have direct rule. There doesn’t seem to be any foreseeable change in that situation. Are our rights so second-class that we can just be put in some sort of indefinite wait?”

If and when the Assembly reconvenes, the DUP will remain the biggest roadblock to marriage equality, yet X says, “the DUP don’t have a monopoly on bigotry. There are other unionist parties and loyalist parties that are holding back progress.

It’s a polarised, complex argument that we are fighting

“It seems that Northern Ireland is devoid and incapable of having the positive discussion that the Republic of Ireland had,” Moynagh says. “I appreciate it wasn’t all plain sailing and there were some horrible times, but there was a positive element of that campaign. Here, it’s a polarised, complex argument that we are fighting.”

The couples in both cases, and their legal teams, say they will now examine grounds for appeal, and seek to raise the funds to do so.