‘I want to give back to Ireland, the country that gave me rights’

Malak Bouod arrived from Libya in 2014 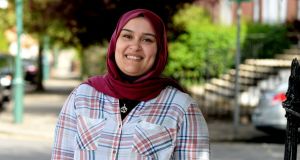 Within four days of receiving permission to stay in Ireland, Malak Bouod secured a job in the tech industry in Dublin. Photograph: Cyril Byrne

Malak Bouod did not plan to stay home on February 17th, 2011. She had spent weeks researching and watching online as young people across Egypt and Tunisia took to the streets to rise up against the governmental forces of power and privilege that had ruled their lives for so long.

Bouod was in online contact with friends who had taken part in the protests and was eager to add her voice to the growing dissent among young Libyans. She sent emails to friends in her home city of Benghazi, encouraging them to take to the streets and call for an end to the brutal Gadafi regime.

However, when the protests kicked off two days earlier than expected following the arrest of a lawyer critical of the regime, Bouod was stuck at home. “My family did not allow me to go out. I was really angry because I felt like it was my duty to go. It’s unfair if I’m encouraging people to go and I’m staying safe at home.”

A few days later she convinced her mother and siblings to allow her to donate blood at the local hospital for the dozens of people injured in clashes in Benghazi. “We took the car and all went together. It was very dangerous. The military were just shooting everybody randomly.”

The rebels’ success in taking control of Benghazi from Gadafi officials represented a real turning point for young Libyans, says Bouod, who was studying chemistry at the time of the revolution. “For me it was the first time I felt like this land belongs to us. We were raised feeling that Libya was not for us, it was just for Gadafi. It was not our home.”

Bouod grew up in a household where she was taught to think for herself. Even as a young Muslim woman growing up under the Gadafi regime – a time when freedom of speech for Libyans was practically nonexistent – Bouod felt compelled to speak out about the human rights abuses being perpetrated in her home country.

She knew she was different from the other girls in school and often relied on her parents’ encouragement when mocked and rejected by her peers.

When she was 16 she began volunteering with a charity working to promote children’s rights in the country. She knew she was different from the other girls in school and often relied on her parents’ encouragement when mocked and rejected by her peers.

“My parents were not educated but they were very open. They raised us like they wanted us to be better than them. We were allowed to drive, travel, learn languages and go to summer school. It was always challenging because the community would laugh at us because they felt we were different. We weren’t typical Libyans. I always stood out from the crowd which is not easy, especially for girls.

“My parents were always behind us. My mother told me don’t cry or feel stressed, people are just envious of you. That’s why they’re against you; they’re laughing at your dreams.”

Bouod’s activism and participation in youth conferences in her late teens and early 20s opened her eyes to the possibility of building democracy in Libya. However, divisions among the revolutionaries and the national transitional council, as well as involvement from Libyans who had returned after decades abroad, only further exacerbated the already tenuous faultlines holding the country together following the death of Gadafi.

“After Gaddafi was gone, people became more divided. Everyone had his own interest. Some people wanted money, others wanted to take over the institutions. For us (youth activists) it wasn’t about Gadafi. It wasn’t just about food and economy. It was about human rights and freedom.”

In 2012 Libya held its first free national elections in 60 years. Around the same time, Bouod applied for a scholarship to study aviation abroad. She had already completed her ground lessons for flying in her late teens but was eager to take to the sky. “It was all my life a dream. I always wanted to be a pilot but it was very expensive to study abroad.”

In 2014, Bouod was chosen as the only female aviation student, along with 100 male students, to move to Ireland for aviation school

Bouod was eventually selected to join a group of female pilots studying in Jordan, a Muslim country which was considered “safe” for the female students. However, the young activist was determined to study with her male peers at a European school. “If they were gonna study in Europe and have high standards, then we should too. We fought for two years until the ministry of education signed the decision for us to go to Europe.”

In 2014, Bouod was chosen as the only female aviation student, along with 100 male students, to move to Ireland for aviation school. She was joined by her younger brother and the pair spent their first 12 months learning English in Cork. The following year she began her studies at the flight training academy in Cork.

“It was a very difficult period because first of all you have to pass the English exam, then the aviation exam and after that the medical check. I passed all of them so I was so happy.”

Unfortunately, Bouod’s time at the school was cut short following a disagreement with course coordinators and department officials in Libya.

Without a scholarship to fund her studies, Bouod was advised to return home. However, with the growing instability back in Libya, she and her brother stayed in Ireland. They spent three months with a cousin in Cork before applying for asylum. They stayed with family while awaiting the outcome of their request and in July 2016 were granted refugee status. Within four days of receiving her permission to remain in Ireland, Bouod had secured a job with a tech company in Dublin.

She is still working for the Dublin company but is eager to find volunteer work to fill her free time. “I feel like being in Europe and not doing anything is a waste of time. People would die for this opportunity so it’s not fair to just waste it sleeping and eating. I want to develop myself but also give back to society. I feel it’s our duty to the country that gave us rights and residency.”

Bouod is grateful that she had the opportunity to come to Ireland for her studies, a country where she says there is little to no discrimination.

“I have friends in other countries and they’re really suffering. Some of them have moved here for work because of the racism. I have experienced a little, but there is no real discrimination here.”

How to trace your Irish family history: a step-by-step guide
6

Minding my disabled daughter: 'I don't want to do this any more'
7