My mother was left devastated when her family emigrated

Family Fortunes: Along with many other Irish families, the dreaded ‘American Wake’ was visited upon us 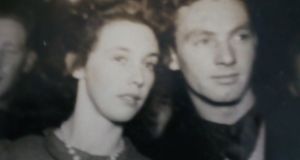 My parents, Nano and Richie O’Connor, made the right decision to stay in Ireland

I never realised when I was young that my mother had an unusual name. Her name was Nano. Dad never called her that, even though all her relations and friends called her Nano. He called her Mam in front of us, his children, or when he’d been to the pub and had a few drinks in him, Dad called her Ann-Marie.

They met when Dad, whose name was Richie, was home on leave to Waterford city while serving with the Irish Army. This was during the Emergency, a period known to the rest of the world as the second World War. They soon fell madly in love and they got married in 1950.

After his time in the Army, Dad found work in the newly opened jute factory of J and LF Goodbody, Waterford. Nano became a full-time housewife and mother, I was second born, another boy. One and a half years after my birth my mother’s world fell apart. This was Ireland of the 1950s and work was scarce. Nano’s mother, father, her brothers and sisters, except her eldest brother, decided to leave Ireland and emigrate to America for good.

Along with many other Irish families, the dreaded “American Wake” was visited upon us. My grandparents, uncles and aunts, a group of seven people in total, sailed from Cobh in Co Cork for New York to begin a new life, in the summer of 1954.

They may as well have gone to the moon; such was the poor state of communications and infrastructure in Ireland then. Mam was devastated, and I’m told she cried for years and was inconsolable. She kept in touch with her family in America by letter but the hurt and anger never left her.

She devoted her life to her husband and family in Ireland; she gave birth to seven children, five boys and lastly two girls. My parents bought their first and only car, a brand-new Volkswagen Beetle, registration number, AWI 807. A car in which most of us subsequently passed our driving test.

My grandparents returned for a visit to Ireland in 1963 and what an emotional and tearful reunion that was. I was old enough to remember the visit but could not comprehend or understand why my Mam was shaking and crying uncontrollably, but also laughing at the same time as she embraced and kissed her parents for the first time in nine years.

The jute factory closed in 1974 and Dad blew his redundancy money by bringing Mam on her first visit to her parents in America. She soon realised life was better in Ireland, after all we lived in the best little country in the world. She had made the right decision to stay here and I think the wounds slowly healed

The woman with the strange name would be pleased to know that an iPod bears her name and that India has a people’s car called Nano.