Ross O’Carroll-Kelly: ‘The anaesthetist is a total knockout – no pun intended’

Ross is going under the knife, but counting backwards from 20 is causing problems 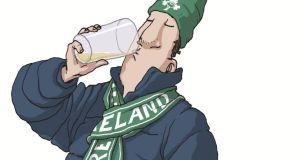 “It’s not that I don’t know how to do it? It’s just that it’s never come up before. I mean, everyone knows the words to, ‘Ten, nine, eight, seven, six…’ don’t they? But who has ever had to count backwards from 20 before?”

The anaesthetist is a total knockout – no pun intended.

“Now,” she goes, “when I give you the injection, I want you to count backwards from 20.”

I’m like, “Twenty?” and I can hear the fear in my own voice.

I’m there, “It’s not that I don’t know how to do it? It’s just that it’s never come up before. I mean, everyone knows the words to, ‘Ten, nine, eight, seven, six…’ don’t they? But who has ever had to count backwards from 20 before?”

Sorcha squeezes my hand and goes, “Maybe if you just count backwards from 10, Ross, but do it twice?”

I look at the anaesthetist. She’s a ringer for Jennylyn Mercado except she’s from, I don’t know, Roscommon or one of those places. “Would that work?” I go. “If I did two sets of tens?”

“Look, it doesn’t matter,” she goes, actually losing her rag with me a bit. The focking cheek of her – and me on Plan B Plus Options. “It’s not the counting that’s going to cause you to lose consciousness.”

“I wouldn’t be so sure about that,” Honor goes.

Seeing me miserable always brings out the best in my daughter.

She goes, “It’ll be fine, Ross. You’re in the Blackrock Clinic. ”

“When you wake up, you’ll have a brand new hip. You can look forward to being – oh my God – pain-free!”

I’m there, “In terms of rugby, though, the dream is over.”

Honor laughs – in that cruel way that 12-year-old South Dublin girls do. “Yeah,” she goes, “the dream was over a long time ago. And it had nothing to do with you having a hip replacement. It’s because you weren’t good enough.”

I’m there, “A lot of people would disagree with that analysis.”

She goes, “It’s a pity none of them ever coached Ireland, isn’t it?”

I say to the anaesthetist, “Can you knock me out right now? Please, I’m begging you!”

She gives me the injection. I close my eyes and I stort the count. I’m like, “Ten, nine, eight…”

“Oh my God!” I hear Honor go. “He can’t count backwards without saying the numbers out loud!”

And that’s the last thing I remember.

Then it’s, like, soup – as in, I can smell soup. This is before I even know where I am. Yeah, no, I can definitely smell soup. And then I feel the pain in my side. God, it’s savage.

I hear a voice go, “Daddy?” and at first I think I must be dreaming. “Daddy, are you awake?”

I open my eyes. Honor is sitting next to the bed with a big worried face on her.

I’m like, “Honor, what is it?” suddenly wondering did they, I don’t know, amputate my leg by mistake? “Did something go wrong?”

She goes, “No, it’s just that I was – oh my God – so mean to you. Then I got it into my head that you might not wake up from the operation. And the last words I ever said to you were horrible.”

I’m there, “Hey, you’re always horrible to me, Honor. That’s the relationship we have.”

“Well, I’m not going to be horrible to you anymore. I’ve learned my lesson. I made you some soup.”

“I thought I could smell soup.”

“They said you can only eat light meals after you woke up. So we went home for a couple of hours and I said to Mom, ‘I’m going to make something for Daddy to say sorry for being a total bitch to him.’”

I go, “The thing is, Honor, I’m not sure I’m up to eating anything at the moment. Maybe later, yeah?”

And what else am I going to say except, “Okay, give it here, Honor. I’ll have a sip.”

Which is what I end up doing.

It is good soup.

“I just wanted to apologise,” she goes, “for saying you were rubbish at rugby.”

I’m there, “I was far from rubbish, Honor. When I mentioned that a lot of people thought I was an incredible player, I was referring to the likes of Shane Byrne, obviously Gordon D’Orcy, Denis Hickie – people whose opinions I definitely respect. Where’s your mother, by the way?”

“She’s talking to the consultant.”

“Hey, this soup is genuinely fantastic – and that’s me calling it. Yeah, no, a lot of people remember the things I did on the pitch, Honor. Why do you think Flannery’s want to put my old hip on permanent display in the pub? It’s going to be Limerick’s first ever tourist attraction. Well, that’s possibly unfair. There’s loads of things to see in Limerick – the problem is they’re all technically in Clare.”

“I don’t want it. Jerry Flannery wants it. He’s another one who would have loved to have played alongside me. Can you imagine it? Jesus!”

Now, you can possibly imagine my reaction? I’ve just taken another mouthful of the stuff and I end up spraying it everywhere.

“You said you liked it!”

My stomach storts heaving, which sends my hip – or where my hip used to be before Honor put it into a pot and boiled it – into absolute agony. I’m going to vom. I’m going to definitely vom.

It’s at that exact point that Sorcha steps back into the ward. “I just spoke to the consultant,” she goes, then she waves a Donnybrook Fair bag at me. “I got the hip, Ross!”

Honor bursts out laughing. “Oh my God,” she goes, “you totally believed me!”

And I’m like, “Sorcha, can you ask that anaesthetist to come back in here? I wouldn’t say no to another four hours of unconsciousness.”