Leaving Cert 2017: It’s mad to have to decide your future now 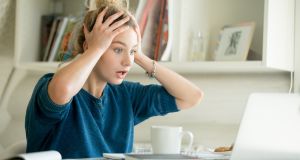 I had duly filled out my CAO form with the greatest hits: Dentistry, Medicine, Law, Veterinary Science, but in the end I didn’t get within shouting distance of any of them. File photograph: Getty Images

It didn’t feel like a laughing matter at the time, but these days I can look back on the Leaving Cert year with something resembling cheerful fondness.

Mired in the hype surrounding high-status (read: high points) college courses, and with an eye trained on a dependably “nice” life, I had duly filled out my CAO form with the greatest hits: Dentistry, Medicine, Law, Veterinary Science. I had about as much interest in putting my hand up a cow’s backside as I was in climbing Everest, but 600 points. Trinity. Swoon!

In the end, I didn’t get within shouting distance of any of them. I glowered with embarrassment when the offer of a college place finally came through – Arts in Maynooth: the ninth choice on my list. I’d have to suffer the humiliation of life being over before it began, while my more clever pals would get an “easy” pass in life. I didn’t know about circuitous career paths, I just knew about wrong ones. At 17, and after five years cooped up in a suburban convent, we were desperate to hear the starting pistol. Ambling was not an option.

There’s a parallel universe Me, who did succeed on that first try of exams, and is now working in an embattled healthcare service, syringing ears in a lonely, dusty doctor’s office or relieving cats of their flu in a vet practice (not even sure cats get the flu. I’d have been pure useless). And then there’s the real Me, who had to engender a lupine hunger for success another way. Who had to find a way around the doors that a middling arts degree couldn’t open. There’s the me that has lived in Los Angeles, London, Melbourne and New York, and has worked in the music and film industries, before winding up here.

Today, thousands of youngsters will feel the very same ignominious sting I did. They’ll expect, hope even, to find the passport to a life they think they want. Instead, they will be forced to think what is the unthinkable at 17: a Plan B.

For the week that’s in it, a hashtag that originated with the Scottish Agency DYW (Developing The Young Workforce) has started to gain traction in Ireland – #nowrongpath reminds school leavers what most of us grownups eventually learned to be true. While third level education is just the ticket for some, it’s not for everyone. A few fateful wrong turns are not the end of the world: in fact, they’re the making of many.

You dont have to get it right first time! Make your own path. Do what's right for you! You CAN do! #nowrongpath pic.twitter.com/y6AdarlWNU

Life is a journey with many twists and turns, and my career has had plenty! - but I'm very happy with the destination 😍 #nowrongpath #DYW pic.twitter.com/Gtvw322IR4

Exam results day? There are lots of ways to get to where you want to go @DYWICH @DYWMoray #nowrongpath #DYW pic.twitter.com/g2zLckwOoC

Mark O’Brien, director of the Axis Theatre in Ballymun, has been a strong proponent of the #nowrongpath campaign in Ireland. He also got caught up in the hype of “high status” CAO choices, putting Law down as his own first choice.

“I think I was into a procedural drama on TV, rather than having any grá for the justice system,” he laughs. He harboured a nascent interest in drama, but had no real idea of how best to make a career in the arts.

He was offered, and later quit, a commerce course at Rathmines College. By way of a year transcribing old parish records, he returned to UCD as a mature student. At the time, the college’s venerable DramSoc was populated by future luminaries like Conor McPherson and Willie White. O’Brien promptly “fell in love with the circus”.

“It struck me recently that the whole idea of having to decide your future at 17 or 18 is mad,” he says. “I hate the idea of that moment where you’re handed the (results) envelope and there’s a feeling that your whole world is falling away from you.

“I get that we need to sell our young people on the need to aspire to something, but I don’t think I know anyone on the planet that has done one path.

“I know people who were top of the class who did Medicine and Law and changed their careers anyway.”

Scratch the surface of the #nowrongpath campaign and it becomes clear that the scenic route winds up being the most gratifying, enriching one. It’s in a school’s best interests to help students get top marks; less so, perhaps, to enlighten them on the myriad weird pathways towards becoming a blogger, photographer or interior designer. Blindsided by the sheer sexiness of law, medicine or architecture, Leaving Cert students often don’t get to hear of the other interesting courses that get less airtime.

“The thing is, there are so many ways to develop a career,” says O’Brien. As for the perceived, time-honoured “hierarchy” of careers, “being a doctor or lawyer is not necessarily ‘better’ than being a hairdresser”, he asserts. “It’s just different. Young barristers have to endure years of penury, too.”

The truth is, being handed all that you (think you) want is all very well, but the lessons learned in the alternative option are much more valuable. Anyone who pursued an education actively as an adult, as opposed to those who had it handed to them after school, found the grind of college all the more rewarding. And while it doesn’t feel like it to the average 17-year-old, you have all the time in the world to decide what to do with yourself. Life is long. If only we’d known it back then.

Vicky Phelan: ‘I hated being a mother – I would have gladly walked away from it’
3

Is that concealer you’re wearing, Mr President? The rise of men’s makeup
9