Stephen hasn't yet forgiven my parents for the revelation of '99

Niamh Towey: The bog is a place of lore and they flock to it like lambs to the slaughter 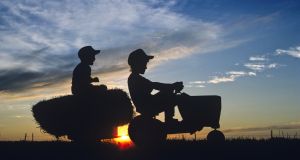 Stephen and Jordan were exact replicas of the token country kid you see on The Late Late Toy Show every year. Photograph: Getty Images

“You don’t need your Tenerifes and your Portugals, no, no, no...forget about that. All you need is the bog. It’s the best place in the world. Margaret loves it,” he said, pointing to the wife.

Margaret would probably love Tenerife and Portugal too, but that turf won’t foot itself.

There’s great headspace in the bog, or so they tell me. Just you and the wireless and rows upon rows of mindless, back-breaking, glorious work.

The bog is a place of lore at home in Roscommon and when that fine weather comes a-calling they flock to it like lambs to the slaughter.

The flask of tea with a soggy ham sandwich; the calloused hands and stinging wind burn – it makes the hair stand up on the back of their necks.

Holding down a full-time job can prove quite a challenge when there’s a week of fine weather and turf just sitting there, crying out for love and attention.

Margaret though, she manages both. Working night shifts during the summer so she can fit in the bog during the day. Tenerife or Portugal? You’ve got to be kidding.

We have one of those in our house too; my brother, Stephen, who I have barely laid eyes on for about three months now, all because of the bog and other farming commitments. Any time I do catch a glimpse of him he blends into the tarmac he is so black with turf maul and tractor grease – and he is as happy as a pig in shit.

Occasionally my parents try to shake some sort of conversation out of him, but to no avail.

“How’s the new job Stephen? Will you be back for dinner? Are you still alive?”

Stephen doesn’t have time for such trivialities though, oh no. Besides, he has never quite forgiven them for the revelation of 1999.

That was back when he was a toddler and would routinely park up one of those tiny little red plastic chairs around the gable of the house to watch the field next-door being cut/shook/baled for days on end. If there was turf there he’d have watched that dry too.

At the end of one successful mowing season for the farmer next door he asked my mother:

“When will Daddy be getting his new tractor?”

“Why would Daddy need a tractor, love?”

“But we don’t have any land Stephen.”

I’m not sure he has ever recovered from that watershed moment. The day he realised his Dad was a big townie eejit with no interest in cattle, never mind turf or silage.

He would have to change tack, shake off this loser family and adopt one with land – or at the very least a tractor, for god’s sake. We’ve barely seen him since.

He now spends his days under car bonnets, inside tractor carcasses and driving incredibly large machinery around big fields which do not belong to his father.

At the weekend he likes to go on Honda 50 runs and watch cars driving around in circles on a patch of tarmac near Knock airport.

This is nothing new, though. Stephen has been forever obsessed with anything which runs on petrol or diesel or moves with wheels.

When he was younger himself and the next door neighbour Jordan concocted all sorts of mad instruments that might edge them closer to car ownership.

First there was the trick of cutting a plastic bottle in half and attaching it to the spokes of their bicycles so that when the wheels turned it made a revving noise.

Then came the mighty chariot. They built a small trailer that hitched onto their bikes from old wheels and wooden pallets. It was quite a stunning piece of engineering for two 10-year-olds.

There was a little red plastic chair attached to it so they could cycle one another around the roads of Castlemore like some sort of medieval king on a horse-drawn cart.

In the winter they watched ‘Grassmen’ videos, a YouTube channel dedicated solely to footage of men cutting hay and silage.

They collected little plastic Bruder toy tractors and diggers and said mad phrases like “The Massey is classy but the Zetor is better”.

They were exact replicas of the token country kid you see on The Late Late Toy Show every year.

To be honest, not much has changed since, just that they’re both hairier now and own real cars. The gap they had worn into the ditch between our houses after years of crossing has slowly closed up, but their friendship endures.

Plus, it would be simply reckless to drive a car over the ditch every time they wanted to see one another.

Pyramid or plate, carbs or veggies: What really is the ideal diet?
6

Menopause: ‘I genuinely believed I was slowly dying’
Real news has value SUBSCRIBE