Mortal Kombat is back, more violent than ever. Is this a bad thing?

Laura Kennedy: Is simulating violence a kind of wrongdoing in itself, or ethically neutral? 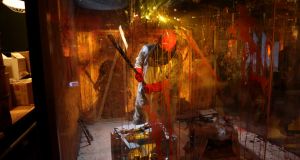 There have been various studies over several decades attempting to determine whether violent video games cause violent behaviours. Although the results tend to vary, a recent study from the University of York that included more than 3,000 participants could find no evidence that video games make players more violent. Overall there is distinct disagreement among researchers, with some arguing that, particularly in young people, playing violent video games can lead to more aggressive moods and behaviours, and decreased sensitivity, and others dismissing these ideas as alarmist.

There is an instinctive tendency, particularly for parents who often feel understandably uncomfortable about their children simulating violence in games, to believe that it must be having a negative psychological impact on their children’s perception of violent behaviours.

As a 1990s kid, I spent plenty of childhood hours immersed in various games now so prehistoric-looking I wonder how we ever found them so engaging. One of them was Mortal Kombat II, which came out in 1993 and caused immense controversy due to what was considered its unnecessarily violent content. It used unprecedentedly realistic digitised graphics (for the time) to depict rather gratuitous brutality, prompting the introduction of age-specific ratings for video games.

Mortal Kombat 11 is due for release in April, with game features and footage finding their way around the internet as it publisher, Warner Bros, takes measures to hype the game’s release. There are probably few people who would not determine that we live in a strange time, and that standards of what is or is not an acceptable level of violence in entertainment have changed enormously in a relatively short period, particularly with advances in technology.

To maintain the game’s controversial and subversive reputation, which is essentially its calling card, the makers of Mortal Kombat 11 have created a game as gory and comprehensively violent as you might wildly imagine.

I should clarify that I don’t have any problem with violent video games, or depiction of violence in films, and like the rest of us, will expose myself selectively to things I want to engage with, and leave the rest for people who want to see them. The exposure or otherwise of children to such things is the prerogative of their parents. Mortal Kombat 11, with a gore for gore’s sake selling point, does not really interest me, but nor does it offend me.

It has prompted some interesting questions, however. Firstly, the question that should underlie the concern of parents and the curiosity of researchers, along with “Do violent games make people violent?” (which is indeed an interesting and important question) should probably be “Is it wrong to simulate wrongdoing?”

We can agree that it is wrong to assault a person without provocation, or, as depicted in Mortal Kombat 11, quite literally tear the face from the skull of an opponent. Is there a lesser qualitative crime in simulating these actions, or is simulating wrongdoing ethically neutral? The answer is not at all obvious or straightforward, but if you come down on the side of simulating wrongdoing being a morally bad action, then simulating violence in games becomes a wrongdoing different only in scale, and not in kind, from committing physical violence in the world.

Secondly, we should probably ask, as violent games become more graphically sophisticated, whether they become more or less repugnant. Was the gritty pixellation of the game I played in 1993 somehow less psychologically dangerous to me – if it was dangerous at all – for its lack of proximity to realism than the version of this game that will be released in April? Certainly, the fluid and minute detail of violence in modern games is probably more disgusting to people who don’t care for it than the clunky, boxy gesturing of the games of my youth, but again, it isn’t straightforward.

There are people who love horror films but don’t want to eat anyone’s liver. There are people who enjoy simulating lawless carnage in games but happily wait at the traffic lights in the morning and promptly pay their taxes. Perhaps it isn’t the games themselves but the secret fascinations they appeal to within us that make us so uncomfortable.

Michael Harding: I was in my underpants, finishing off the pint...
7

Yes, having ‘just’ the one child can make for a wonderful family dynamic
9