‘I came to Ireland from Nepal and got reverse altitude sickness’

Dipa Rai, who arrived in Ireland in 2015, finds Irish mountains ‘flat but tough’ 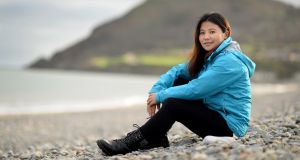 As a child in Nepal, Dipa Rai would walk six kilometres to and from school each day. When she moved into secondary school, the journey increased to a daily 10km round trip. Most of the route was uphill and in monsoon season the children had to pick their way through mud and debris while keeping their eyes open for rocks falling from landslides. Growing up in a village 3,000m above sea level and surrounded by the towering Himalayan peaks, the daily trek to and from school didn’t faze the young student.

“Walking up and down the mountain was nothing for us. I can still run up and down them. My school was on the top of a hill, and in the spring season we used to get these strong storm winds and every year the roof blew off. Our school rooms were dark and muddy, and without the roof there would be puddles inside. It was very basic.”

She grew up in the village of Phuleli in the Solukhumbu region, which only recently was connected to the country’s capital Kathmandu by road. “When I was a child it used to take seven days to get to Kathmandu,” says the 29-year-old. “We had to walk for six days and then get a bus for another day. Nowadays it takes 10 hours to get there from my village.” She lived in a small stone house that was protected from the biting winter winds by the surrounding mountains. “Even though our houses looked big and are very cosy, they were just built up with local materials. They’re weren’t earthquake resistant.”

Rai, the niece of a mountain guide and cook on Everest expeditions, had mountaineering in her blood. She was four when Dawson Stelfox became the first Irish man to reach the summit of Mount Everest in May 1993. Stelfox’s cook on his climb was Dai’s uncle. Six years later one of the members of the expedition, Robbie Fenlon, returned to the Himalayas with his mother, Jane.

When she finished school, Rai moved to Kathmandu to work with her uncle Dhana as an assistant guide in the trekking business he had set up with Fenlon a few years previously. Dhana was also working with the Irish Nepalese Educational Trust, a small Irish charity the Fenlons set up on one of their visits to the Himalayas.

The trust’s “main purpose was helping students. When I was growing up, the school quality was really poor and the buildings weren’t enough. These conditions made Jane and her friends support education in my region. Since then they’ve built nine schools.”

In December 2015 Jane Fenlon invited Dipa to spend three months in Dublin learning English. She initially struggled to secure a student visa and later discovered she was the first ever Nepalese person to apply to study English in Ireland.

“There were Nepalese students who had come to Ireland for university but I was the first English-language student. They rejected it the first time but eventually I got the visa. I think the problem was they couldn’t understand why a Nepalese woman would come all the way to Ireland to learn English.

“I found Ireland very different – it was so cold and windy. We don’t have this kind of wind in Nepal, even though it’s cold. The funny thing is I actually got sick from reverse altitude. I couldn’t walk properly and my body felt so heavy.”

While studying English in Bray, Rai also signed up to a university access course in history and sociology at UCD. “I wanted to learn more about Ireland because I didn’t know anything about this country except that the people were friendly because they’d helped my village and community so much. In the language course they’d mentioned the famine and colonialism and that made me interested in Irish history.”

In 2016 Rai returned to Kathmandu to continue her training as a mountain guide and signed up to the second ever government-run course for female guides.

“Becoming a trekking guide wasn’t really open to women before. Nepal was a very conservative country and still is in some places in terms of women’s equality. There is a lot of inequality. I felt like it was a great opportunity to train, feel stronger and be able to compete with men. It was a really male-dominated business or career, but that is changing now, women are coming through now.”

Having passed all her exams as part of the UCD access course while in Ireland, Rai was offered a place at the university as an undergraduate student. With the support of some fundraising events, she returned to Dublin in 2016 to begin her studies.

“I always wanted to go to university but I did not have that opportunity in Nepal. Going abroad to study was my dream. But I didn’t have much English and I went to a very poor quality government school. Then it just happened.”

She is now studying social sciences at UCD and works part time in the Great Outdoors shop in Dublin’s city centre.

She still lives in Bray and frequently goes hiking in the Wicklow mountains. “Being from a landlocked country like Nepal, I love living beside the sea. The Sugarloaf is right there and Bray Head is beside us. Jane loves hillwalking, so we go hiking quite often and we’ve been to many mountains in Ireland. I love Irish mountains. They’re flat all right, but in a way they can be quite tough.”

She plans to return to Nepal in the future and work in her village to help develop and improve farming techniques. “Ultimately I’d like to go back to Nepal and work for the community. I want to bring back my experiences and ideas and help improve people’s lives because people from my community don’t really travel. Agriculture is still very traditional there. I want to see the conditions improve to the extent that people can earn some money. I don’t want crazy development, I just want to work sustainably and help change my community and my country.”

My misanthropic father would have embraced social distancing
7

Revealed: The secret to flapjacks that don’t fall apart
8

A hurley as a sex toy? Ah would you camán out of that
10